Fence Select at Arts Center of the Capital Region ... 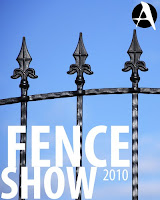 The Fence Show at the Arts Center of the Capital Region in Troy has cemented a place in the annual schedule of many of the area's exhibiting artists, much like the better-known annual Mohawk-Hudson Regional. Though this regional has less prestige, and may draw from a narrower range of practitioners, recent years have demonstrated it is of equal quality to its older sister (which will have a Hyde Collection debut later this year).

Find this assessment surprising? That probably means you haven't seen this year's Fence Select, which was meticulously chosen and assembled by Tang Teaching Museum curator Ian Berry, and which you really must check out if you intend to keep up with who's who on the local art scene.

The list of participants includes names familiar from past editions of both exhibitions, such as Deborah Zlotsky, Ray Felix, and Abraham Ferraro, among others, along with new (to me, anyway) names such as Neil Fryzer, Admiral Donald "Duck" Wilson, and Niki Haynes. There are 53 works in all by 38 artists, representing a strikingly inclusive range of media from mezzotint to magic marker to modified exit sign, and it all holds together with deceptive ease.

The individual artists deserve credit for their fine works, but the real magic maker here is Berry, who was somehow able to cull from a jam-packed gallery full of submissions (as seen in the popular Fence Salon) a crisp combination that reflects the depth and breadth of this region's artists while expressing his sharp curatorial vision. Berry has organized numerous successful shows in his tenure at the Tang, and he also put together the first show in this space, titled Showroom, when the ACCR opened here around 10 years ago. 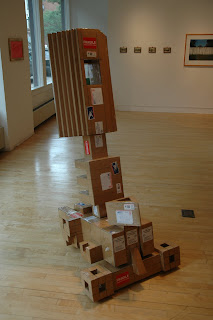 I will admit I didn't like that show, and my own taste sometimes clashes with Berry's - but his style has grown on me and, I daresay, he has grown a lot as a curator over these years, so I generally expect to like what he does now even if I don't necessarily like his specific choices of art. This is one place where art curating relates to film directing - some directors (Ang Lee, for example) can take almost any sort of story or genre and put it together in a film that you will love regardless of your taste in movies.

A skilled curator can take a concept about art and pull together work that will convince you of it via a fascinating journey through a gallery. Berry's introductory text to Fence Select, in which he invites the viewer "to craft open-ended narratives," describes his concept clumsily but well enough to make it clear. For me, the show delivered on Berry's promise, as a singular organism telling one large, ever-changing story of a vibrant community of artists who refuse to be defined by any style or movement, with boundless creativity and a crystalline sense of purpose.

One outstanding example, pictured above, is Ferraro's Mailable 2, a sculpture that was mailed in four parts as is, requiring some assembly and, more important, some thought to suss out. This piece does many things any ambitious work of art ought to try to do: it transforms its subject matter (in this case, I will take a leap and say the subject is shipping and assembly), makes masterfully innovative use of common materials, communicates visually, and doesn't take itself too seriously. These feats make the piece engaging, enlightening, provocative, and fun - the same characteristics I have come to expect from any show with the Berry touch.

Also on view at the ACCR through Sept. 3 is a weird and witty solo exhibition by Caitlin Foley titled Transmogrify.

Employing various alternative media, including some very nicely constructed artist's books, Foley plays with dualities - a tote that's a tent, sets of favorite or least-favorite sounds, a bird-bicycle that needs your assistance to pedal itself (shown below, with a real finger poking through it). Foley's vision is quirky, if not quite bizarre and, as seen here, is not fully formed - but that's okay for a first-year Syracuse University MFA candidate who shows this much promise. 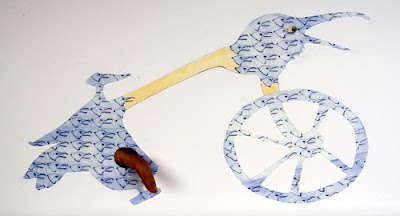 Posted by david brickman at 5:58 PM

Thanks David...as usual an acurate description!