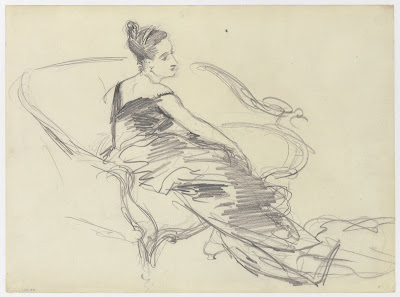 It's amazing how tastes change in art. When John Singer Sargent first exhibited his portrait of Madame X, the poor response to it led him to threaten quitting the business. Now, it is not just his most famous painting, it could easily be considered his best - and, to my 21st-century eye, most of what he did after it would not be missed even if he had made good on that threat.

Though the monumental portrait, now a jewel in the crown of New York's Metropolitan Museum of Art, is not included in John Singer Sargent: Portraits in Praise of Women at the Fenimore Art Museum in Cooperstown, two revealing sketches made in preparation for it are (one is reproduced above). Also belonging to the Met, these are joined by an impressive roster of works on loan from public and private collections spread across much of the United States, for an exhibition that will only be hosted by the Fenimore.

I was most drawn to a corner of the gallery where the little pencil sketches of the "unpaintable ... and hopeless[ly lazy] ... Madame Gautreau" (her actual married name) have plenty of fine company in the form of works from Sargent's early years. There we find quickly but expertly executed studies such as the demure oil on paper titled Rosina Ferrara, Head of a Capri Girl and the slightly naughty oil on canvas Carmela Bertagna, both created when Sargent was still in his early twenties. 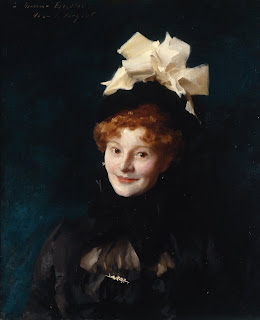 Another strong early work from this time period, titled Head of an Italian Woman, required a very short trip from its home at the Arkell Museum in Canajoharie, and is somewhat inappropriately framed in a wonderfully extravagant gold conglomeration featuring Greek columns - but its freshness survives (even more vivacious, Sargent's 1883 portrait of Madame Escudier, made in Venice shortly before the portrait of Madame Gautreau, is reproduced at right, above).

These works show Sargent as a passionate young painter, intent on his craft, afire with ambition and possibility, and not yet spoiled by too much success. The later work, done mostly of society ladies in Paris, Venice, London or Boston, strongly supports Sargent's reputation as a great portraitist, but it therefore tells us far more about his sitters than about the man himself.

What motivated Sargent to paint portraits in the first place? Why so many women, and so much attention to upper-class fashions? These questions are raised but not answered by the exhibition, which serves as much as a historical representation of Victorian and Edwardian times and tastes as it does of the artist who so vividly documented them. 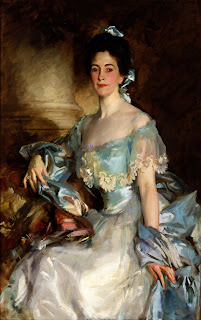 After pondering these thoughts for a time, I did a bit of research, and found certain insights. Sargent, though American by citizenship, was a lifelong expatriate. Born in Florence to a comfortable (but hardly wealthy) family, he was educated there, then in Paris; ultimately, he made London his home, visiting the U.S. regularly to do commissions, but never actually living there.

Perhaps his outsider status caused him to strive to be accepted in higher circles of society. Certainly it enabled him to successfully observe and record their styles and personalities, but a portraitist is always an outsider nonetheless. Equally intriguing is the fact that Sargent never married; rumors of his sex life have not been proven, but various sources suggest he was homosexual.

Nothing unusual in that time or ours: A charming, talented gay man, beloved by fashionable, older ladies, and happy to flatter them in his paintings (as in Mrs. Abbott Lawrence Rotch, 1903, reproduced above, at left), Sargent was rewarded with wealth, fame, and access to higher society. Clearly, he wanted all that - perhaps he did, and was able to achieve it because he identified with his subjects in a way that their husbands surely could not.

John Singer Sargent: Portraits in Praise of Women will remain on view at the Fenimore through Dec. 31. The exhibition is augmented by a free cell-phone tour and accompanied by an amply illustrated color catalog.

Also on view at the Fenimore (but just through Sept. 6), is a major, historic photography exhibition In Our Time: The World as Seen by Magnum Photographers.

The show, which was created in 1989 and traveled the world for the next three years, is stuffed with 50 years of iconic images, including Dennis Stock's portrait of James Dean walking in the rain; Jacqueline Kennedy in tears at her husband's funeral, by Elliott Erwitt; Sebastiao Salgado's antlike gold miners; and a peace demonstrator fighting fire with flowers by Marc Riboud (below).

All the pictures in the show are in black and white; most are printed in the classic Magnum manner, with black borders, and many represent a style of artistic photojournalism that Magnum made ubiquitous, beginning with the inimitably incisive and graceful work of one of the agency's founders, Henri Cartier Bresson. It is both timeless and very much of its time. 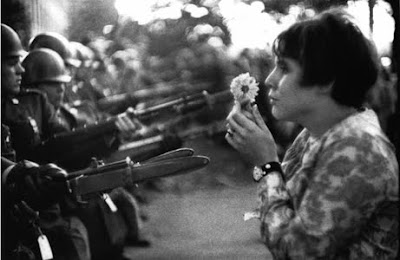 Posted by david brickman at 2:50 PM

I stumbled on both these exhibition at the Fenimore recently, and was absolutely floored by the Magnum exhibit. I don't have a deep arts background so I wasn't familiar with Sargent but felt really fortunate to catch that exhibit as well. The Fenimore is really a local gem.

Your blog is wonderful for ALL people who read just for the pleasure derived from the way you write David. Thank you, a

I greatly enjoyed both shows (went to the Fenimore before a performance at Glimmerglass). I would have missed the Magnum show if I hadn't already known it was there. Though I always enjoy Sargent and found this show well done, I found the Magnum show more compelling and spent far longer with it. Once again, thank you David for your keen eye and clear fearless articulation.

It's striking how the Magnum show elicits such strong responses more than 20 years after it was first organized. I think this speaks to the clear vision of the show's curators, as well as to the continuing ability of black-and-white still photography to crystallize and communicate historical moments to viewers. Has color digital photography retained that special power?