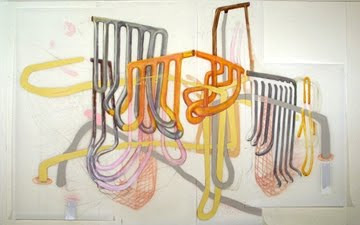 It’s hot, it’s muggy – by all means, go swimming, go boating, go fishing! And if you happen to be doing any of those things in the Lake George area, you might also want to go to the Lake George Arts Project for Kathleen Thum’s marvelous exhibition, which is there through Aug. 13.

Thum is an inventive and intuitive painter whose work combines sinuous lines with seductive surfaces, weaving a visual story of energy and interconnectedness. Systems of tubes and grids are arrayed and layered in the 26 works on view, which comfortably fill the LGAP’s clean, well-lit space with their mostly understated colors and forms.

Working in a variety of media (graphite, colored pencil, ink, gouache, and acrylic) on materials such as vellum, Mylar, wood, and rice paper, Thum maintains a strong consistency throughout. A nice rhythm is established by the installation, particularly along one wall, where 12 almost square, small works on panel are arranged in a long line that alternates from light to dark, light to dark. These pieces, all very recent, refer to the BP oil disaster in the Gulf of Mexico, with titles such as Spew, Green Gusher, Well Out, and Barriers and Spreads, but they do not shout about it. 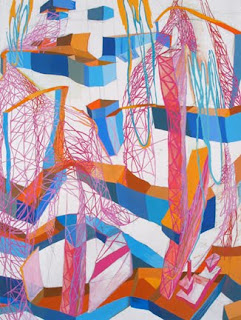 Instead, the new works reiterate themes from the show’s earlier pieces (all dated 2008), creating the odd sensation that Thum was already on this track years before the pipes broke, and it was just natural for her to continue with it after. Additional larger paintings (including the one shown at right) expand on the dripping oil-rig theme while maintaining continuity with Thum’s earlier tropes using tubular systems and gridded matrices.

In an artist’s statement, Thum goes on at length about the body’s cells, nerves, and skin as the model for her searchings, but I didn’t get that so much from looking at the paintings and drawings; they seem rather mechanical to me, more like a factory’s works than an organic system’s. This merely underscores that she’s headed in the right direction now that she identifies these images with human-made systems rather than the system inside a human.

The paintings are quite lovely, with very subtle passages of color and texture that draw the viewer in to look as closely as possible, and then challenge you to resist the temptation to touch the surfaces. These range from flat to silky to shiny, and often incorporate intriguing translucencies, whether through the use of frosted Mylar or through drawn and painted overlays. The largest pieces are pinned directly to the wall, but float slightly away from it, adding their slight cast shadows to the sense of layering.

Those works, while successful, are not as uncommon-looking as the more recent pieces on paper mounted to panel, where Thum makes maximum use of the white areas around her colored coils to manipulate the picture plane more directly. Two medium-sized recent pieces, titled Scribble and Plait, that accomplish this particularly well were hung together in a stack and emerged as my favorites from the show. Black Gold, another outstanding piece of the same size (22 by 30 inches), takes a different tack, filling the page with rows of brightly striped pipes and ominous dark puffs to generate an uncomfortably pretty tension.
This is the first local solo exhibition by Thum, who earned her MFA from Bowling Green State University in Ohio and is a visiting professor at Skidmore College. I hope there will be more to come.
Posted by david brickman at 12:52 PM