The Landscape of Memory: Prints by Frank C. Eckmair at NYSM

One response to the hard times plaguing most arts organizations these days is the current tendency of museums to produce new exhibitions from their own collections. It's an effective strategy that has the combined benefits of saving money and reinforcing the institution's prestige, the type of win-win situation creative organizations are always conjuring up when under financial pressure.
The Landscape of Memory: Prints by Frank C. Eckmair at the New York State Museum in Albany is just such an exhibition - a wonderful surprise that shows off the richness of this public collection and the mastery of a dyed-in-the-wool New Yorker (now in his ninth decade) who has established himself as a pre-eminent graphic artist.
Eckmair, who hails from the central New York town of Gilbertsville, and who had a long and influential teaching career at Buffalo State College, celebrates the upstate agricultural legacy in print after print, his efficient swaths of ink on paper speaking volumes in form and feeling. The show is nicely spread out in the museum's sprawling Crossroads Gallery (right next to the bird collection), and includes Eckmair's tools of the trade, such as a letter press, engraving gouges, and quite a few finished blocks, along with more than 80 framed prints.
The range of scale in this cache is pretty impressive, from tiny, detailed pieces that exemplify the familiar book-plate application of wood engravings to pieces around three feet long or larger, which push the boundary of what can be printed from a wooden plate (the differences between the smaller wood engraving and larger woodcut are subtle, but involve the hardness of the wood, the tools employed, and the resulting precision of the lines). 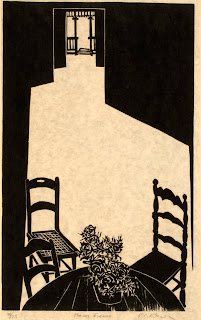 Eckmair's command of both media is always present, but he doesn't make a fetish of it - on the contrary, he tends to use only just as much technique as is necessary to get his point across; the rest of his attention goes to making the design just right. This is accomplished through a deceptive ease with the language of shape, color and contrast, and is especially effective in his use of white space.
A very watchable interview video of Eckmair, made in 2010, allows him to tell us in his own words why he prefers a white background, and to express the pride he takes in integrating that white into the subject matter (one striking example, an untitled print about 4 feet long, is shown at the top of this post; another, titled Monday Evening, is shown above, at left). Other insights from the video include Eckmair's preference for old things - indeed the show is steeped in nostalgia, especially as 50-year-old prints depict houses and farm machinery abandoned decades before that - and he explains the reasons he rarely includes people in his images.
The graphic power with which Eckmair creates his rural landscapes and interiors makes the show an uplifting experience, despite the sometimes gloomy cast of these images. There is also a playfulness in much of the work, notably in instances where the wood grain, knots and all, is prominently displayed as a graphic element.
Eckmair spent some of his formative years stationed in Korea and Japan in the Air Force, and the Oriental influence on his work is obvious. What's beautiful is how he has taken that stylistic aspect and made it his own, while simultaneously applying it to the subject of his ancestral and lifelong home. So a horizontal slice of the woods in snow becomes minimalistically calligraphic - yet still feels like central New York - and the many vertical scenes of house and hill and machinery that tumble toward you off the museum's walls retain a hint of Hokusai and Hiroshige. 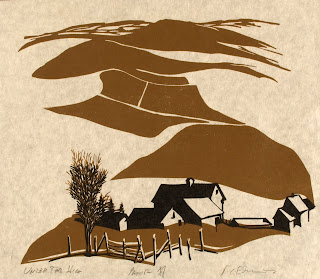 Unlike these Japanese wood-block printers, who reveled in many-colored prints, when Eckmair strays from black ink, he does it exceedingly sparingly, often as a quiet note of gray or blue or ochre (as in Under the Hill, shown above, at right). Still, even these bits of color can seem expressive among the many monochrome blacks on view here.
But those blacks have a range, too - from the pure silhouette of a house against the sky to highly textured areas that detail every leaf on a tree or every blade of grass. In most cases, the work has a rare quality of efficiency, thought there are a number of rather elaborate examples in the show as well.
In addition to the scenes, the show features several examples of politically charged images from the early '60s, including humorous broadsides that use old-fashioned wooden type, and a couple of prints that relate to socially conscious work of the time, such as that by Ben Shahn.
Altogether, The Landscape of Memory is a sumptuous immersion into a rich life expressed in "a poor man's" art. It runs through September 17.
Rating: Highly Recommended
Posted by david brickman at 3:17 PM

thanks a lot for calling attention to Frank's show. I must make time to see it. Loved the display of two of my old friends engaged like this - your writing about my great BSC colleague. I haven't seen Frank's work in too long a time, and it has been a great pleasure to see how he has moved out of the blacks that he handled so well to a new world in while light. Excellent review of a legendary new york state artist. - tony bannon

Thank you David for the wonderful comments about the exhibit at the Clark. Bob Winchester

I came from the Mt. Upton area close to Gilbertsville and was thrilled to see Mr. Eckmair's work displayed at the NYS Museum of Natural History in Albany last Friday. I took my two youngest childrn Jadon & Jordann ages 8 & 5 to experience all the museum offers. The exhibit and video of you were mesmerizing. Thank you for sharing your beautiful work which so represents te very places of my youth. My little ones loved it too. Jane E.Aikins