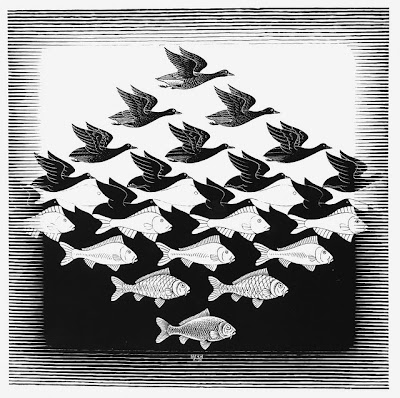 It had been several years since I'd gone to the Berkshire Museum in Pittsfield, and I am so glad I got back there this week for the current exhibition M.C. Escher: Seeing the Unseen. Founded in 1903 with a dual mission to present material on natural science and fine art, the museum completed a major renovation three years ago, adding climate control, a modern entryway, and fresh galleries, and updating its approach to the same worthy mission.

The result is special - and the Escher show perfectly fits the museum's family-centric and dual goals by offering an experience that can be taken in by all ages and on many different levels. 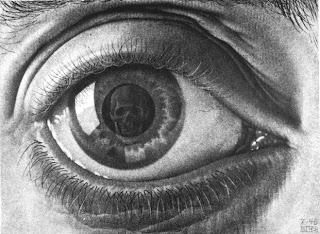 For those of us who grew up in the '60s and '70s, Maurits Cornelis Escher's work was ubiquitous and highly influential. No doubt, visitors of baby-boomer vintage to Seeing the Unseen are finding it more than a little nostalgic and will recognize many of the images presented (as I did). Equally likely, their kids or grandkids will delight in this accessible yet intensely fascinating imagery as a new discovery. Either way, it was a smart choice by the folks at the Berkshire to organize this exhibition, and I expect it will draw crowds everywhere if it gets the road tour they are seeking for it.
While some would be inclined to dismiss Escher's art as mere illustration, or to take it less seriously because it was (and still is) so popular, this collection of 120 works representing about 45 years of the Dutch native's output should put such thoughts to rest. On the basis of technique alone (in painstakingly rendered woodcuts, lithographs, mezzotints and drawings), it's clear Escher was as good as it gets.

Though he was, apparently by nature, a bit dry compared to many of his more histrionic contemporaries, nearly every item presented transcends the realm of pedestrian graphics to stand up as Escher's personal expression of awestruck wonderment at the way things appear and the way things maybe really are. In fact, he was ahead of his time, not behind it, in his integration of mathematical and scientific knowledge into the creation of a personal vision.
The show (which relies on loans from the Boston Public Library and a couple of commercial art sources) begins in a smallish gallery where both the earliest and some of the latest works can be seen and compared. Here, numerous examples of drawings and prints from Escher's formative 10 years spent in Italy show not only how he honed his vision and technique, but how those agrarian Italian vistas and geometric towns remained a key influence on that vision for the rest of his life (such as the 1930 lithograph Castrovalva shown at the bottom of this post).
The early drawings and prints also demonstrate how deeply Escher studied nature, setting the stage for him to later become enthralled with math and physics. And they provide a fresh perspective on an artist perhaps too well known for certain eye-tricking visual puzzles that became icons for the psychedelic generation (such as Up and Down, shown below at left). 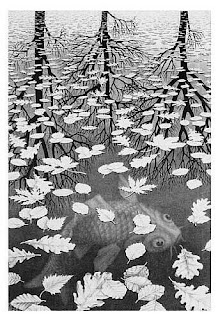 That Escher's sometimes fantastical vision was deeply rooted in nature is key to understanding his work, and the range of images in this first gallery of the show makes that clear by linking the early and later works (such as a 1933 lithograph titled Phosphorescent Sea, and the 1955 litho Three Worlds, which is shown at right).
The first gallery also establishes the show's own graphic style and informative intentions with hanging and wall-mounted panels of text and photographs that illustrate the man and his influences. Here I found two Escher quotes that function almost as bookends to his aspirations. The first, "Only those who attempt the absurd will achieve the impossible," is apt but a bit arrogant, while the second, from very late in his life, shows humility: "I try in my prints to testify that we live in a beautiful and orderly world, and not in a formless chaos, as it sometimes seems."

Throughout the rest of the exhibition, the thoughtful inclusion of rare artifacts and related materials provides context for the marvelous images, most of which are masterfully hand-printed and so detailed that the many magnifying glasses placed in racks here and there are sure to be put to good use.
Among the extras are several short videos that animate and further transform some of Escher's most illusory designs; '60s-era clothing with Escher patterns; vintage black-light posters, properly illuminated and accompanied by beanbag chairs for comfortable contemplation; videos of people with elaborate Escher tattoos; and reproductions of Escher imagery on book covers, in puzzles and plastic toys, and in one recent case as a New Yorker cover featuring an oil-dripping pelican.
But, for me, nothing beyond the still mind-blowing original art was needed to create a deep impression and be uplifted by the outpouring of work from one artist's lifetime. The show ends on May 22 - try not to miss it.
Rating: Highly Recommended 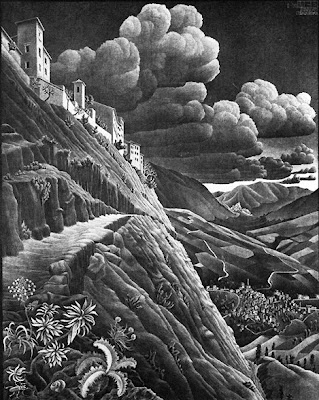