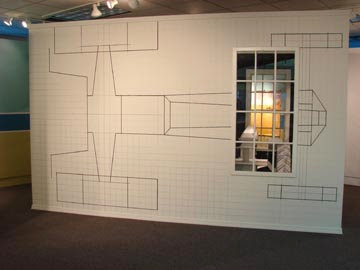 The curatorial process can be a wondrous thing to behold. Done right, it reveals new and significant relationships among works of art without drawing too much attention to itself - a neat trick in today's look-at-me world. A perfect example of the importance of the eye behind the arrangement is seen in Keeping Time, now on view at the Albany International Airport Gallery (and, unlike the airport's other artistic offerings, accessible at all hours to the non-flying public).

Organized by Art & Culture Program Director Sharon Bates and her longtime assistant Kathy Greenwood, Keeping Time combines the work of seven familiar regional artists under a unifying theme that comes as a bit of a surprise - that is, it's a revelation that so many of the best artists currently working around here have certain fundamental issues in common.

Issues such as nostalgia, the transformative power of memory, identity, and the sense of place all permeate this work. At the same time, the individual artists in the show stand clearly and solidly on their own - there is no style here to bring them together like a group of similar-looking painters or sculptors. 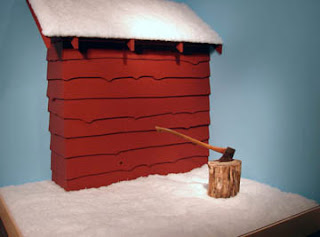 Still, as the show makes obvious, they belong together. Only two of the seven were new to me in this showing, and many of the works included have been shown in recent local exhibitions - still, this is a completely fresh experience because of the new context and combination.

The genesis of the show was an idea for an installation by Ken Ragsdale (who has done others in the airport's other spaces) which deftly exploits a small, roomlike remnant from the previous show in this space, transforming it so effectively that it didn't even occur to me that I had seen it there before.

Here, Ragsdale expands on his well-established trope of folded-paper machinery constructions, this time placing a half-size foamcore farm tractor inside a one-room schoolhouse, complete with little desk, chalk-marked slate walls, and framed Ragsdale works hanging on the walls. A glassed door and four double-hung windows provide ample opportunity to view the tableau, which is temptingly inaccessible. The exterior (shown at the top of this post) has a scalar projection of the tractor inside drawn on its wall, creating an Egyptian sarcophagus-like effect.

Most similar to Ragsdale among the other artists in the show is Matt LaFleur, who also has created a site-specific installation for Keeping Time, his first ever (shown above, at left). The connection of this faux-woodsy scene to the rest of LaFleur's work is readily apparent from the sketches and finished works also shown, many of which use the most pedestrian of art-making materials - construction paper, glue, and colored pencil. 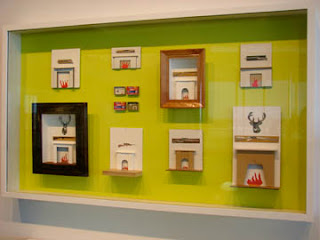 His naivete seems real, yet so does the strength and sincerity of the work, which plays with the intersection of images from LaFleur's rural youth and his rural adulthood, sometimes making fun of it and honoring it in equal parts (his perfectly coined term for this style is "hick modernism").

That term could also be applied (lovingly!) to the eco-centric treatment Michael Millspaugh gives to his own take on a past/present/future point of view that features hunting and camping themes (to see a review of a Millspaugh solo show that ran in this space a year ago, click here). Here, Millspaugh offers a range of self-made implements, embroidered patches, and dry-as-a-bone line drawings, as well as an abundant array of little fireplace scenes (shown above at right) - two of them set inside tiny matchboxes.

Another Keeping Time artist who combines disparate images is Stevan Jennis, who cuts up old paint-by-number paintings into equal squares and then reconfigures them into complex mosaics (identified here as collages). Jennis also presents mid-sized sculptures of toys with rough, almost stony patinas - turning a Jack-in-the-Box figure or a dollhouse into an obtuse, almost malevolent object. 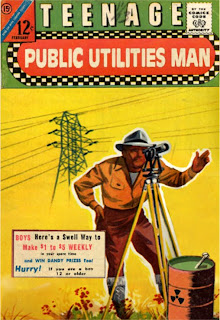 Old toys are an obsession of Randy Regier, whose false but very convincing '50s-style character DimeStar appears here in a variety of forms, from comic books to kids' wristwatches. Regier's jaundiced view of the corporate approach to little boys' imaginations is rich with associations for anyone old enough to remember that "simpler" time (example shown at left).

A lighter approach to old-fashioned products for kids is taken by the only woman in the show, Leslie Lew, whose sculpted oil reliefs and cast paper prints are colorful and - seemingly - uninflected by irony. They were for me the least interesting pieces in the exhibition, blandly playful and brightly celebratory (an example is shown at the bottom of this post). 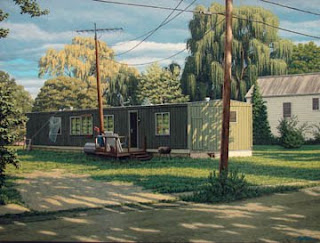 Finally, Joel Griffith is a brilliant painter, three of whose five pieces in Keeping Time were recently seen in an Arts Center of the Capital Region show (reviewed here), and one of which caught my attention at last year's Exhibition by Artists of the Mohawk Hudson Region at the Hyde Collection (reviewed here).

The one painting by Griffith that is new to me in this exhibition (shown above, at right) is actually the earliest of the group, but it reinforces the notion that the strength of Griffith's work is not dependent on the cold and the dark that dominates the other four pieces - this warm and sunny image is just as intriguing, if less obviously foreboding.

Keeping Time is open seven days a week through Sept. 5 for travelers and visitors alike. Short-term parking doesn't charge for the first half-hour, so if you're quick, you can get in and out for free.

Note: Another Bates-curated exhibition is set to open with a reception from 5 to 7 p.m. on Friday, June 3, at the Esther Massry Gallery at The College of Saint Rose. Titled the Karene Faul Alumni Exhibition, it features eight Saint Rose-trained artists - Kathy Greenwood, who graduated there in 1992, among them. 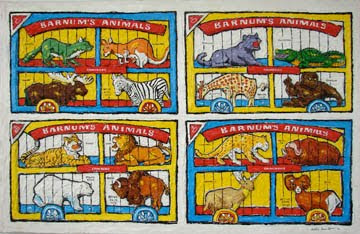 Posted by david brickman at 4:50 PM

I like that show as well. Always great to see Joel Griffith's work, it's almost photographic.