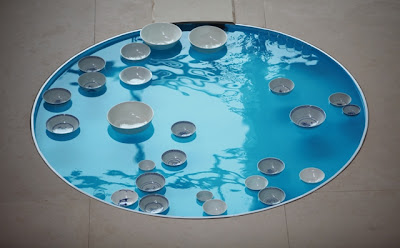 We don't need any reminders right now of the destructive power of water, but maybe a reminder of its soothing power is that much more welcome at this time - and equally welcome is the fact that a two-part sound installation by the French composer Céleste Boursier-Mougenot at EMPAC in Troy, originally scheduled to end on Sept. 1, has been extended through Nov. 5.

The Experimental Media and Performing Arts Center pushes the envelope by definition, but this pair of sound installations works beautifully in the majestic EMPAC space, making for a very pleasant and accessible experience for anyone with an inquisitive mind, and open eyes and ears.

The more visual of the two pieces was my focus for this visit. Untitled (series #3) is an elegantly simple sculptural piece that is something like what you would get if you tried to combine a wind chime and a Jacuzzi.

In it, three identical, round pools of water are set into a low platform and populated by similar sets of round, ceramic or glass vessels that float randomly on the current of a filter jet. As the white and blue bowls and clear wine glasses move about, they knock into each other, producing a range of ringing sounds and rhythms that depend on the size of the object and its stability (the smaller bowls tend to rock, which creates trilling multiple knocks with each little collision).

Formulated on the premise that "nature is one of the most unknowable generators of time-based events" (as expressed in curator Micah Silver's essay), what the casual observer may perceive as a sweetly resonant exercise in delicate sound could be understood by a mathematical mind as an infinitely complex system of algorithms.

I was taken as much by the delicacy of this miniature orchestra's song as by the peaceful movement of the many circles within the circles. EMPAC's soaring, bridged space allows many points of view from above the installation, which is the best way to take it in visually. There are also several places to sit right on the platform, next to or between the pools, where the combination of tones emitted by the sound generators varies from each vantage point.

Seen up close, the movements of the vessels are almost comical - I was reminded of bumper cars, for example - as little dramas of races, collisions, and near-misses are enacted on the currents in each pool. The color palette of white and blue, along with the mellow tones of the pottery and glass, creates a relaxing atmosphere - but if the pools were more densely packed, or the current speeded up, I imagine the piece could produce a chaotic or even violent effect. Instead, in this form, it is rather trancelike. 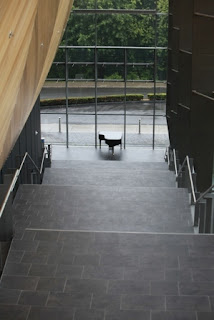 Silver describes untitled (series #3) as "not a system, but a score," that creates "a very expectation-defying music." Similarly original is Boursier-Mougenot's other installation, titled index (v. 4), which features two grand pianos that are rigged to play automatically in response to the computer keyboard tappings of EMPAC employees at work in their hidden offices.

The piece has a visual presence as well, with the sleek, bulky, black instruments placed symmetrically at the bottom of two elongated staircases on opposite sides of the building, their open keyboards pressed against the plate glass, facing out toward the world beyond it.

As if haunted by ghostly performers, these "mechanically actuated" pianos emit bursts of sonorous notes that sound a bit like New Age improvisation. The invisible source and unpredictable timing of the movement of the keys is a touch creepy, whereas in the water piece one can see the bowls about to touch and anticipate their ringing. However, the system's controls (in this case, computer programs) have again been adjusted to produce a relatively pleasant sound, where something harsh or disturbing could as easily have been created.

If you haven't yet seen the astonishing spaceship-like interior of EMPAC, this may be a good time to go check it out and enjoy Boursier-Mougenot's sounds as well.

Also in Troy and well worth a look is a newly opened show at the Chapel + Cultural Center, where playful and delicate prints by Sunghee Park fill the front gallery area and the lounge area features paintings on slate by Joella Cass and mosaics by Ida Pagano that have been held over from the summer. The C+CC is open seven days a week, and the show continues through Sept. 30.
﻿
﻿
Posted by david brickman at 2:35 PM