Give ‘The Guard’ a go


Regular readers of this blog know I rarely review movies, but there’s a film out there that isn’t getting the attention it deserves, so I’m making an exception. When I saw “The Guard” on a recent weeknight, only five or six other patrons were in the theater – and that’s a shame, because it is a smart, irreverent film well worth seeing.

Built around two first-rate actors, Brendan Gleeson and Don Cheadle, “The Guard” draws from the deep well of postmodern black humor first drilled into our consciousness by “Pulp Fiction,” yet it is also a charming, Euro-indie film with a small-town story of human frailty and strength. Then again, “The Guard” is a buddy-cop movie in the great tradition of “Die Hard,” with Gleeson and Cheadle as inspired a pairing of opposites as you could wish for. On top of that, “The Guard” is a full-on Western – complete with Ennio Morricone-like soundtrack – that just happens to take place in contemporary Ireland rather than 19th-century Nevada. 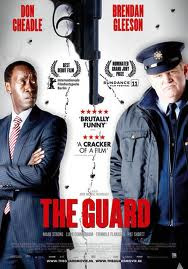 For some, this may be too mixed-up a set of references to be enjoyable – for others, it may all be a bit too obvious (trust me, if I’m picking it up, it’s obvious). But I found it hugely entertaining. When the bad guys are cruising along the highway, they don’t debate the merits of their favorite footballers or recreational drugs – no, they’re discussing philosophers (“Bertrand Russell was Welsh?”) – and then they find themselves faced with the philosophical dilemma of being pulled over by the one cop in the county not on the take (who they murder, of course).

Gleeson is, as always, amazing. His country-bumpkin sergeant manages to seem dense, roguish, depraved, and debauched – yet he’s actually the moral and intellectual center of a tiny world gone mad. Cheadle could be better (and is in many films), but he’s still better than most as an FBI square from a privileged background who’s out of his element but still savvy enough to realize what he’s gotten himself into before it’s too late.

Though the conclusion of “The Guard” is predictable, it’s the trip along the way that makes it worth arriving at, beginning with a horrifyingly grisly car crash and the sergeant’s astonishing response to it (he finds a bag of LSD on one of the victims, then tosses all of it to the wind – except for the one hit he places on his tongue). You know then it will be a wild ride, and it is: funny, shocking, poignant –  including plenty of truly lovely photography of the rugged Irish coast.

If you saw and loved “In Bruges” (which also stars Gleeson), then this is your kind of film. I was only a little surprised to learn that John Michael McDonagh, who wrote and directed “The Guard,” is the brother of that film’s creator. It’s vulgar and violent, and the accents can be hard to understand, but “The Guard” has something to say, and it says it in a fresh way. Give it a go.

Posted by david brickman at 5:16 PM

Glad to read your review. The Handsome Husband and I saw the preview at the Spectrum recently and I wondered if we'd like it. Sounds like we should go see it.