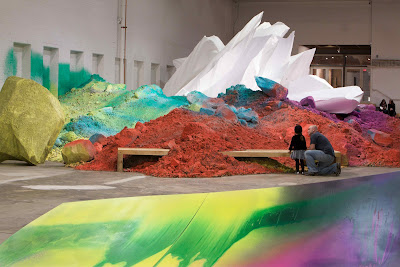 I finally got myself back to the Massachusetts Museum of Contemporary Art in North Adams this week after a too-long absence, and it was well worth the trip. As my museum-going companion succinctly pointed out, MASS MoCA made its bones by taking risks, and they always seem to pay off - even when something there doesn't work, you have to admire the effort.

At the very least, you have to be impressed by the scale of things at this gargantuan former factory complex, and you can count on the vastly abundant industrial forms that make up the physical plant to be esthetically pleasing and fascinating in themselves, sometimes even more than the art. One reason I made the trip now was to catch the tail end of an important installation by the German painter/sculptor Katharina Grosse, which opened many months ago and will close on Oct. 31.

Ungrammatically and, to me, annoyingly titled one floor up more highly, the piece combines elegantly sandblasted, pure-white forms in styrofoam with garishly spray-painted mounds of rocks and dirt that also contain a few recognizable objects, such as a massive wooden bench and articles of clothing. Also in this group is a floor-mounted, curved planar polygon that is either a painting or a sculpture, depending on your definition of those media, and through a door at the end of the gargantuan space containing these works are two levels of spray-painted rooms, one of which features a framed abstract painting hung on the wall.

Grosse's installation is exuberantly colorful, muscularly formal, richly textural - I could go on, but you get the picture - and I wanted to like it so much more than I did. Somehow, though, it left me cold. Can't really explain why that is, as I normally enjoy all those elements in a wide variety of art. The closest I can come to explaining this failure to ignite is that the piece just doesn't work as a whole, that despite its quantity it doesn't properly fill the space - that this artist has bitten off more than she could chew.

Others surely will disagree, and I encourage you to go and see for yourself whether you do or not - but I am willing to take the risk of saying in print that this piece is, at best, a beautiful and expensive mess. 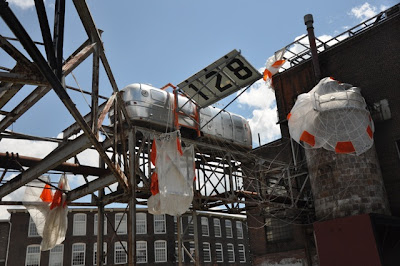 Meanwhile, up on a catwalk, exposed to the elements and a real challenge to reach on rickety old legs is Michael Oatman's All Utopias Fell, a neo-retro-futuristic fantasy that extends Oatman's longstanding obsessions into his best work yet - an experiential time-and-space capsule that should bring out the kid, or at least the mad scientist, in all of us (pictured above).

Oatman is essentially a collage artist who regularly works in three dimensions as well, creating participatory environments chock-full of stuff: pictures, gadgets, artifacts and so on. AUF consists of an Airstream trailer with solar panel-festooned wings and deployed parachutes that appears to have crash-landed on the museum's superstructure. Its occupant is missing, but his incomprehensible, complex inner world is on full display in the ship he rode in on.

Visitors can enter and do as they please in this delightfully bizarre interior, which is accessible only in good weather (i.e. not during the winter months) and which will remain there indefinitely. It contains all manner of material related to energy - books, a bicycle-driven generator (I rode it, and it works), and more or less functional-looking living quarters (featuring a goodly supply of toilet paper and put-up tomatoes), along with an elaborately (but crudely) furnished electrical workbench and many, many mysterious electronic contraptions.

A full description would be next to impossible - imagine the contents of an artistically and scientifically inclined packrat's garage or basement all fitted into a tiny living space and you get the idea. As with past installations by Oatman, I was left shaking my head in wonder at his ingenuity, resourcefulness, sense of humor - even his sincerity. He's a space-age kid stuck in a postmodern man's world, but thankfully he's got what it takes to drag us back in time to where he comes from - and it ends up looking like a wonderfully twisted version of where we're going.

A third major exhibition that opened at MASS MoCA in May and will remain until March is titled The Workers (or The Workers: Precarity, Invisibility, Mobility); it originated in a smaller form in Mexico, and has been expanded for its incarnation here, to include 25 international artists and filmmakers who depict workers in various ways.

Equal parts art and propaganda, The Workers has a terrific concept and ends up being a fine example of something where the whole is greater than the sum of its parts. Much of the art in the show is overwrought, as politically oriented art so often is, yet for me the show was still stimulating and enjoyable. As with most of the group shows I've seen here over the years, it uses the space of the galleries extremely well, allowing a comfortable flow from piece to piece and room to room.

A number of the pieces in the show appear to have been made specifically for it, in some cases by local artists, with an eye toward the detailed industrial past of the museum. This conjunction of purposes is the key to the success of the show, and I was somewhat surprised to find that I consistently preferred the pieces in the show that were related to this history.

Whereas some of the international work struck me as bombastic (for example a full-size gallows with an office water cooler set next to the trap door), some of the more local work was resonantly lyrical. My favorite pieces in the show included a wall montage of the torn-out bottoms of paper bags with the names of the factory workers who made them stamped on them (take a look at a paper bag, and you'll see one) by Mary Lum, who lives in North Adams; Los Angeles photographer Anthony Hernandez' Landscapes for the Homeless; and an installation featuring a chain-link fence and images from a 1970 strike at Sprague Electric by New York City-based Camel Collective (pictured below).


The Workers is accompanied by a detailed brochure, fittingly printed on cheap newsprint in black ink. With written material that keys on "the uncertain fate of today's workers," it strikes a rather relevant chord - and one that I respond to more than some, having been laid off from my own job nearly three years ago. As with the logo (seen above, right), the catalog eloquently expresses this exhibition's roots in socialist theory, especially as it was embodied nearly a century ago by Mexican muralists, or more recently by artists of the Soviet regime. Clearly, this point of view still has life in our global culture and still inspires many artists.

Posted by david brickman at 6:07 PM

I'm with you on Grosse's piece, that didn't do it much for me either, I didn't get the cohesion or maybe she was trying to hard (which is a bit stupid to say given the sheer size of that piece). The Workers show was great, I found the piece about the impact of the recession on virtual workers in Second World fascinating.