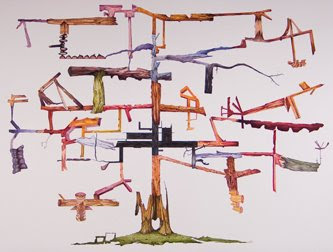 What is it about wood? The substance in all its forms makes up most of what Matthew Hamilton draws and paints, as revealed in a strong solo show at the Lake George Arts Project's Courthouse Gallery in Lake George Village http://www.lakegeorgearts.org/ through April 17.

Hamilton has an MFA from the University at Albany and has been showing in regional exhibitions for about 10 years, but he first came to my attention about two years ago when a couple of his wood paintings appeared in the Fence Select show at the Arts Center of the Capital Region in Troy. What struck me then were three things: the meticulousness of Hamilton's technique, his idiosyncratic way of building a composition, and that weird wood thing. I also noticed that the pieces had sold, not all that common an occurrence around here, but not a surprise in this case.

I say that despite the extreme oddity of these images - they are hardly your first idea of art that pleases - and despite the fact that I didn't find them particularly appealing myself. It can be that way with good art - you may not like it at first, but in time it will win you over.

Hamilton has achieved something increasingly difficult in these times. He has created a style that is uniquely his, and he has done it not by employing some bizarre medium or new application but rather by the old-fashioned route: maintaining a high standard in the persistent pursuit of his obsession.

The show at LGAP provides an ample glimpse into Hamilton's world, with five pencil drawings and 10 acrylic paintings (all on paper, ranging in size from 9"x12" to 38"x50"). All but one are dated 2008 or 2009; the earlier one (2007) is a useful example of the evolution of his style, as it is a color piece but with a very 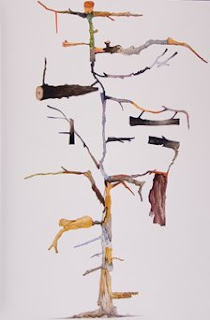 narrow palette. Apart from the monochromatic pencil drawings, which are very good, Hamilton has grown increasingly confident with color.

Three of the 2008 paintings in the show straddle this transition to stronger colors, beginning with the one titled Hybrid Junk Tree 2 (shown at right), with its white background and relatively subdued range of colors, and ending with the much looser Ancient Hybrid Junk Tree, which features a pink background and strong shades of red, blue, and green, along with forms that resemble ice crystals and molecule chains, augmenting the wooden subject matter.

In between is Giant Hybrid Junk Tree (shown at top of posting), which has Hamilton's characteristic linear composition, empty background, and Rube Goldbergesque chains of objects.

Aside from Goldberg, I see elements of influence from surrealist Salvador Dali and the Imagist school of Chicago artists (Hamilton did his undergraduate studies there); in his statement, he also cites Brueghel, Van Gogh, and Philip Guston.

All artists show their influences; the smart ones recognize them; and the best ones transcend them to strike out on their own. I believe Hamilton is in that last category, and I look forward expectantly to what he will do next.
Posted by david brickman at 6:00 AM