In the news business, that headline is what we call alphabet soup. In this case, it refers to the Mohawk Hudson Regional Invitational at Albany Center Gallery, a tradition - now in its 22nd year - of choosing artists from the vaunted annual juried show for a more in-depth showcase exhibition.

This year's MHRI features three emerging artists who are curiously well matched. Allen Bryan, Philip J. Palmieri and Matthew Peebles have little in common in terms of background, influences, schooling, etc., and they work in diverse media: photography, painting, and sculpture, respectively. But they share a certain skewed view of reality - one that it wouldn't be a stretch to call surrealism.

Bryan makes lovely, illusionistic photographs that take good advantage of the possibilities of the digital medium without abandoning the traditional photographic values of composition, clarity, and print quality. By collaging together bits and pieces of scenes he has shot for about two decades, Bryan creates new, ever-so-slightly unbelievable scenarios that mix different eras, types of space, and lighting.

These impossible images remain believable, though, because Bryan carefully balances the colors, textures, and points of view in his fragments to create a harmonious whole. Or is it? That is, these relatively quiet, uninhabited scenes of interior/exterior spaces are visually cohesive but psychologically jarring - not disturbing, just slightly creepy.

Relatively large (around three feet across), and seductively hued, Bryan's nine panoramic pictures in this show suggest family ritual, forgotten and abandoned places, time-disconnection, and unseen drama. Dated from 2007 to 2009, they progress from almost perfectly illusionistic to clearly not spatially right - allowing Bryan to reach further into his bag of tricks while slyly letting the viewer in on the process.

Palmieri is a physician who specializes in infectious diseases. His oils on canvas are 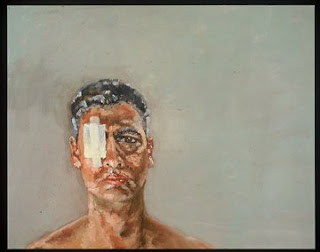 modestly sized (all but a few in the show are about 16x20 inches) and depict people with bandages. Many of these are self-portraits - this, the artist said at a gallery talk during the Regional last year, is because he's readily available.

Whether of himself or other subjects, the people Palmieri represents are not in context - their injuries are not explained or even shown, their expressions are neutral. But the figures, naked except for their gazes and those white bandages, are both mute and eloquent. The few examples where more of the figure is shown, and more context fills the background (a landscape, a chair and pillows), end up being less evocative than the ethereally empty ones, where we can let our imaginations and emotions respond more freely.

A separate group of five smaller works, where Palmieri has painted figures on pages of outdated medical texts, were for me more of a gimmick - a bit sensationalistic, a bit voyeuristic. I think he needs to push the boundaries of that idea into new territory before it will hold any real interest.

Peebles shows six sculptures in the exhibition, four of which are small enough to be contained in foot-tall bell jars. The other two are figurative, approximately life-size, and freestanding. Peebles is a joker, and the two larger pieces are, in effect, one-liners. One shows a fellow who has melted out of his clothes, forming a pink pool of goo at his own feet; the other depicts a character who dances maniacally in Homer Simpson pajama pants - but has morphed into some kind of lumpy groat. I didn't quite get it.

The four smaller sculptures, while still sort of jokey, are easier to take seriously as art. In their glass enclosures, they naturally draw you in to examine them closely, and the detail with which they are rendered makes the effort worthwhile.

All but one of these specimens feature a life-size hand that exists in a Lilliputian world. In one, the hand has grown bark and functions as a super-spooky hanging tree. In another, it is naturalistic but still under construction, rearing up next to a miniature metal scaffold with tiny tools scattered on its wooden planks. The third hand holds a children's playhouse aloft, rope ladder dangling.

These works are skillfully rendered in a near-realistic style that is almost like three-dimensional comic-book art - colorful and expressive, but tightly rendered. The technique applies perfectly to Peebles' fourth vitrine, under which a peaty dome forms an environment with a cozy Hobbit-like interior and an archaeological treasure-hunt of an exterior, complete with human and dinosaur bones and other funky artifacts.

It's a nice departure for Peebles, and a nice metaphor for the show, for which the gallery's director goes on an annual treasure hunt at the sprawling Regional exhibition, then brings back some bits that we can explore more fully. The show runs through May 9; a reception will take place during 1st Friday festivities on May 1 from 5 to 9 p.m.

One more thing - in the interest of transparency, it should be mentioned that I am a volunteer member of the Albany Center Gallery exhibits committee.
Posted by david brickman at 10:35 AM