Nothing defines our time like the phrase "culture of excess," and there's nothing like a trip to New York City to put excess in the forefront of your mind.
New York has too much of just about everything (except maybe open space), and that includes art galleries to choose from. This is overabundantly clear in Chelsea, where it seems every storefront, former garage, factory building and hole in the ground is filled with art.
Wandering around there for a few hours on a recent visit, I thought a plan of attack might have its merits, but found pretty quickly that a nearly random approach was probably as good a way as any to cope with the overwhelming sensation of too-muchness. It's like being in a grand bazaar, where everywhere you turn there are tantalizing choices - you just make a decision and trust that what you got was as good as the stuff you missed, and anyway, what else can you do?
So my friend Ron and I started at a place that has terrific architecture and blue chip art. Jim 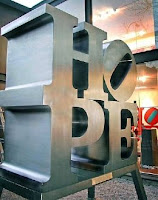 Kempner Fine Art http://www.jimkempnerfineart.com/ features a sculpture garden behind a high, solid steel wall and a tri-level gallery space inside. The work shown was priced up to $700,000 (that would be Robert Indiana's crassly commercial Hope sculpture at right). I saw little that I really liked, however, and sensed an unmistakable atmosphere of pure desperation at the gallery- after all, this is post-meltdown New York.
Our next stop was similarly posh, though a more welcoming space, and it was filled with name artists, including Warhol, Basquiat, Lewitt, Arman and other dead people. Apart from the Lewitt, it left me with a morbid sensation of impending doom - so I declared an instant moratorium on anything that wasn't from a living artist, and preferably not so damn overpriced.
Immediately, things got better. Bruce Silverstein http://www.brucesilverstein.com/ provided a nice palate cleanser in the form of a three-part photo show, by E.O. Hoppe, Andre Kertesz, and Cloud 9, which presents nine cloud pictures by Alfred Stieglitz, Imogen Cunningham, and Edward Weston. Despite the unmistakable deadness of all the artists, it was a fresh presentation of dazzling black-and-white images, especially those by Kertesz. It runs through April 25.
We next stopped in at Paul Kasmin Gallery http://www.paulkasmingallery.com/ , 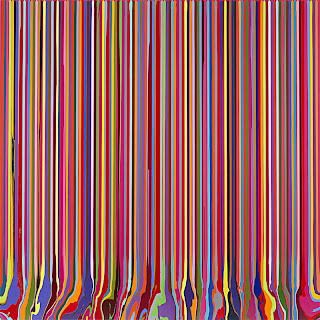 where a group of very brightly striped paintings (see left) by one of those Young Brits we're always hearing about was on view. Ian Davenport will be showing there through May 2 and is worth a look if you like that sort of thing. The paintings left me somewhat cold, but the young gallerina's smile was so warm it made my day.
With a new bounce in my step, it was on to more down-to-earth settings and stylings. A John Waters solo photography exhibition at Marianne Boesky http://www.marianneboeskygallery.com/ had all the humor and grunge of his films; and in the gallery's project room were some really sensitive portraits by Kaye Donachie, which were somehow still campy enough to hang with Waters. Nice place.
Right nearby was an installation at Gladstone Gallery http://www.gladstonegallery.com/ by a Polish artist named Miroslaw Balka that was inspired by, and just about as pleasant as, the Holocaust. I sort of wish I'd given that one a miss.
But what happiness to have not missed the fantastic installation just down the block by Tony Oursler at Metro Pictures http://www.metropicturesgallery.com/, though I am sorry to have to report that it ended on Saturday.
Oursler is well known for making video projections on three-dimensional objects to create a new kind of sculpture; sound often adds a creepy and/or humorous element to his work. The three-room installation at Metro had a walk-through forest of tree-sized burning cigarettes (that also burned backwards - unburned?), a huge, talking five-dollar bill, and tiny houses with running theatrical/domestic dramas projected into them, along with quite a few other pieces both large and small. All of it was pretty damn brilliant.
Next up was a purposeful stroll to Yossi Milo Gallery http://www.yossimilo.com/, one of the

best contemporary photography galleries anywhere and a must-see for shooters like Ron and me. We were not disappointed - the current exhibition by Myoung Ho Lee, titled Tree, is a wonderful series of tree portraits, created on-site by suspending a huge canvas backdrop behind the tree and then shooting it within but isolated from its surroundings.
Lee uses impeccable large-format color photo technique, and then applies equally sophisticated digital skills to remove from the image the visible traces of the bars and cables that hold the canvas. the resulting pictures are fictional, or illusionistic, but also touchingly real.
Posted by david brickman at 5:25 PM