Degas & Music at The Hyde Collection 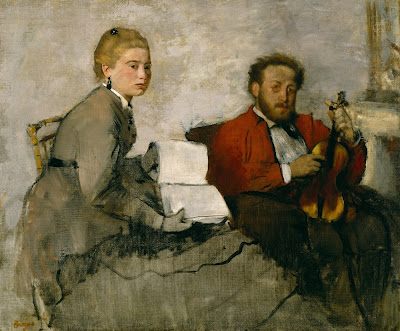 The blockbuster has been a staple of Hollywood's summer movie business for generations and, for decades now, major museums have followed suit (led by 1978's The Treasures of King Tut at the Metropolitan Museum of Art). It makes sense to capitalize on the season's greater leisure time by pulling in those tourist dollars with something spectacular, and turnstile-spinners help keep the museums afloat during leaner times.

We're certainly in lean times for museums these days. And so, with Degas & Music, The Hyde Collection enters the Blockbuster Zone. The Hyde, in Glens Falls, has a strong claim on Edgar Degas, as it owns several of his works. But this show goes way beyond, reaching far and wide to bring together an impressive collection of the Impressionist's works that otherwise could never be seen together.
The show's thesis is simple enough: Degas grew up in a musical family during a time when music was increasingly playing a role in everyday life. Hence, his work is strongly influenced by the presence of music and expresses that in deeply personal terms.
This theme is borne out by the selection of works, which range from pencil studies to large oils on linen, and is supported by the research and other artifacts on view. The wall-panel text states that "over 2/3 of his oeuvre was devoted to ... ballet," which of course would be accompanied by music. But the real point is that so much of the rest of the work was about music - clearly, this was Degas' most enduring passion.
Beginning with a soul-searching self-portrait from 1854, made when the artist was barely 20 years old, the exhibition offers fine examples of the master's technique in drawing and printmaking, both of which underscore his graphic style of painting.
Though a rather large, green-hued painting of a dancer onstage is visually the show's centerpiece, the beating heart of the exhibition is a trio of works presented in a side gallery. These three pieces - brought together from homes in San Francisco, Boston, and Detroit - demonstrate and contrast the different ways Degas worked with texture, color, composition, and chiaroscuro to try to transmit his experience to the viewer.
The smallest of the three, which were all painted within a few years of each other, depicts a young woman and a male violinist as though they have just been interrupted mid-music lesson, or perhaps while preparing to perform a duet (it can be seen at the top of this post). The spontaneity of the moment is enhanced by a slightly shifting focus - the woman's face is sharply delineated and detailed, while the man's falls slightly into blur. Varying degrees of paint on the surface create points of varying interest (difficult to appreciate in a reproduction), which move the eye around but ultimately reinforce the connection between the two musicians, and emphasize the intimacy of the scene. 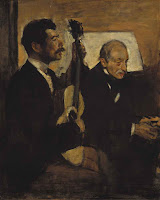 To this painting's left is a larger one, a vertical (shown at right), which also depicts a pair at a private musical soiree. Here, one musician plays a guitar and another has turned his back to the piano keys to listen. The composition again directs the eye, quite powerfully, this time toward the listener's ear. Degas is showing the action (which involves a famous guitarist and the painter's father, an amateur pianist), but he is trying to do much more - he is making us aware of the act of listening to the music by describing that idea visually and planting it in our brains.
Further to the left is another painting that goes beyond this concept. It presents a closeup of two players in an orchestra, 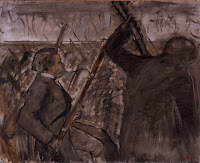 using very little color, and reducing one of those players, a bassist, into a hulking foreground element (the painting is shown at left). Here, Degas has achieved his goal of making us hear the music - because, not only is the bassoon player puffing mightily away, he is surrounded by marks that, while ostensibly representing the shadowy figures of the other players and their instruments, also describe great sonic waves radiating out from the bassoonist. At last, Degas has depicted frequencies.
There are many other works to be appreciated in this exhibition, including Japanese-inspired fan paintings from the collection of the Musee D'Orsay, a series of 20 state-of-the-art reproductions from 1897, and one of the Hyde's own jewels, a fetching pastel of two dancers that displays all of Degas' graphic mastery in one little pair of red tights (seen below).
There are also innovations that speak to the Hyde's serious efforts at survival - labels naming sponsors of individual works (a fresh concept to me, and one that obviously succeeded, as most of the pieces have one); a new glass exit door that leads visitors right from the gallery into the gift shop; musical programming tie-ins at various venues; and, lest I forget to mention it, the museum's first-ever admission fee (a fair $10).
It all bodes well for the little upstate house museum that could - the place was crowded for a Tuesday, just days after the show opened with a Friday preview, and the excitement was palpable in the air. Congratulations to curator Erin Budis Coe and all the museum's staffers for a years-long job exceedingly well done. 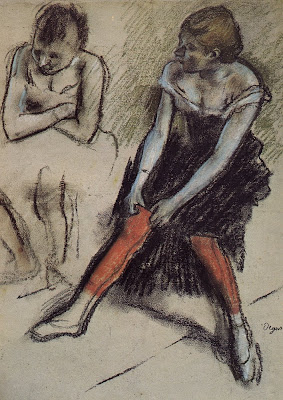 Posted by david brickman at 6:52 PM

I wonder if you saw Thomas Chambers at the Hyde this spring. For some reason, didn't particularly like it. Would rather have seen the collection you saw.

Roger - I did not see that show, so I can't compare, but will take your word for it - hope you find time to see Degas. -db

The Degas & Music exhibition contains at least one "bronze" predating Degas' death (d 1917) from the Hyde Collection's own collection.

The only problem is Degas never cast in bronze.

Additionally, there are other so-called bronzes borrowed from other collections in this Degas & Music exhibition.

The Hyde Collection is a member of the Association of Art Museum Director and as a member endorse the ethical guidelines from the College Art Association of sculptural reproductions, which in part state: "any transfer into new material unless specifically condoned by the artist, is to be considered counterfeit and should not be exhibited or displayed as a work of art.

Degas was dead when all 2nd to 3rd generation-removed forgeries, attributed to him, were cast into bronze with counterfeit -Degas- signature inscribed.

As I'm sure you know, the dead don't sculpt, much less sign anything.

So, why are these member museums violating their own endorsed ethical guidelines?

I look forward to your reply.

To my readers: I do not endorse the above comment, having insufficient time or expertise to determine its validity. However, I have allowed it to remain on the blog in the interest of free speech. It isn't the first time I have seen this writer's point of view expressed in the local media regarding the issue of post-mortem bronzes. Any experts out there would be most welcome to post useful information on the issue here. Thanks! - db

To learn more about the contentious issues of authenticity with posthumous forgeries falsely attributed to Edgar Degas, link to: http://garyarseneau.blogspot.com/2007/05/all-degas-bronze-sculptures-are-fake.html

One more note of interest, Edgar Degas never signed his original mixed-media sculptures when alive and yet all the bronzes, which are posthumous, are inscribed "Degas."

How'd he do that?