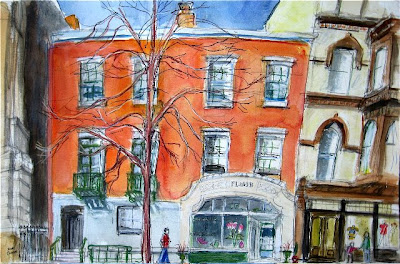 John Connors loves old buildings the way you might love an old aunt - gently and generously. His watercolor paintings of sites in Troy and other places, now featured in a solo show at Clement Art Gallery, have humor, color, detail and - most of all - affection.

A stalwart at Clement, Connors splits his time between Lansingburgh (a borough of north Troy) and New York City, and his show has a similar configuration. There are nine Troy paintings, one from Cohoes and four from New York, plus a bunch of unframed works collected in a bin for browsing. All share the loose (but unfailingly accurate) style of a street artist - not coincidentally, the show is titled Working the Streets - whose subject is the setting, with people present simply as window dressing.

Light is also a subject for Connors, as it washes over his gorgeous facades and as it filters through stained glass for the one interior (of Troy's Saint Peter's Church). While Connors' colors are more vivid than pastel, there is an ethereal lightness to his Frear Building, a wedding cake of a structure which, in Connors' interpretation, is loomed over by the more robust, red Market Block building.

A more massive presence is felt in Music Hall, where the bulky structure rises up in jaunty, wide-angle distortion, a trick Connors gleefully and regularly employs. But not all his images are of impressive architecture - in fact, some of the best painting Connors does brings our attention to a scene we might otherwise never consider, as with the transcendentally sky-blue Kitchen Cabinet Store or Cohoes' Calkins Pharmacy.

In the New York paintings, Connors lavishes equal amounts of care on landmarks and lost souls. So, in this installation, Carnegie Hall rubs shoulders with both the Strand Bookstore and Ninth Avenue Wines and Liquors. The paintings seem a bit touristy at first, but they will grow on you - Connors has an eye, and he has plenty of technique to back it up.

Add note: If you haven't already noticed, Troy has pretty firmly established itself as a solid center of our regional art scene, and Clement is planted squarely in the middle of that. It may be easy for sophisticates to dismiss this venue as a frame shop putting on airs, but they'd be mistaken. Not only has the space grown to include a really impressive roster of regular artists (such as Harry Orlyk, Bob Moylan, and Laura Von Rosk - and more at http://clementart.com/), it has also built a nice lineup of printed catalogs from its monthly shows. This is definitely a gallery to be taken seriously.
Posted by david brickman at 12:52 PM

I wish he would paint the 4 Greek Revival houses on Second St. They are known collectively as "cottage row'. I would certainly buy one of these if it were available. I love his art style.