Lives of the Hudson (and K.O.S.) at Tang Museum 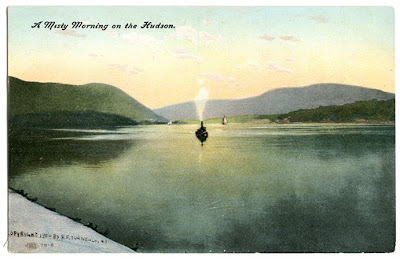 Enough with the Hudson River 400th anniversary exhibitions already! Everybody is having one, including the New York State Museum, Albany Institute of History & Art, Samuel Dorsky Museum at SUNY New Paltz, Hudson River Maritime Museum in Kingston, and Hudson River Museum in Yonkers, among the larger sites, and the list goes on and on with smaller galleries.

But maybe it isn't enough - as was pointed out in a recent issue of Metroland, 400 years is a heck of a long time, and well worth celebrating. So it is in that spirit that I recommend the latest offering in this field, an eclectic exhibit called Lives of the Hudson at Skidmore College's Tang Teaching Museum. This is new territory for the Tang, known for cutting-edge art and far-reaching academic crossovers, not for history exhibits. But, even if you're hooked on the Tang's often tongue-in-cheek style of curating, you shouldn't be disappointed with this thoughtful and still edgy offering of art and artifacts from the last 200 years of life along the Hudson.
The show gets off to a promising start with a curtained entrance that reveals what looks like the corner of a historic house museum - curio cabinet, gold-framed landscapes, sage-green walls, white mouldings and all. But then you notice that the pattern on the curtains (by Bob Braine and Leslie Reed) is of poison ivy, and hear the sounds of some kind of ambient music wafting from a darkened theater area beyond the green walls, and you know you really are in the Tang after all.
An introductory text explains that the exhibition is organized around four themes (the Natural River, the Imagined River, the Human River, and the Working River) and that we are invited to perceive those themes on our own as they weave throughout the gallery. This lightly structured approach makes for low-pressure viewing and encourages the process of discovering relationships for ourselves.
As with some past shows here, this one tries to make the most of juxtaposing a broad range of techniques and technologies to tweak our interest and stimulate our synapses. While it may be pretty obvious to place a giant wood-and-brass steamboat steering wheel in front of a row of misty color photographs taken from a train window as it rolled along the river in 1999, it's still fun to contemplate their continuity. 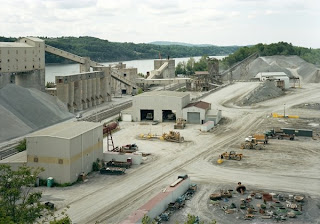 More subtle is the pairing of a gutsy 1937 Bruce Mitchell gouache of the river and its industry with a trio of photos from 2006 by An-My Le that present the same subject matter from a similarly lofty point of view (a Le photo is shown above). One can't help but ask whether much has changed along this river in nearly a century of "progress."
Nearby, sober horizontal cases contain treasures as diverse as an antique postcard collection and three deeply satisfying works by the Ashcan School luminary John Marin. Not surprisingly, his two small sketches and medium-sized watercolor are as good as anything in the show.
Also nearby is the jewel in the crown of this show, and one of the great works of 19th-century American art: A stunningly modern landscape by Thomas Cole titled Storm King of the Hudson, which is on loan from Ball State University in Indiana. Though not of great size (maybe 24 by 36 inches) Storm King is so powerful that it would dominate the viewers' attention were it not intelligently given modest placement near the back of the room (you can see it at the bottom of this post).
Fortunately, the Cole is not alone in capturing our attention in this wide-ranging conglomeration. Other highlights include a desktop-sized computer monitor that runs a virtual aerial view of the river from bottom to top as seen on Google Earth (created for the show at a Skidmore lab using the Global Information Systems program); a very tasty 1931 lithograph of the New Hudson Bridge by Howard N. Cook; four mounted "fish" by Braine and Cook that are cast from polluting materials such as road salt and toilet paper; Maxine Henryson's Everyday series of photographs mentioned above; a large 2008 Yvonne Jacquette painting of quiet city reflections on the river at night; and an elegiac film installation by Alan Michelson.
If you have to see just one commemorative exhibition for the quadricentennial, this may be the one to choose. And, while you're there, you can go upstairs and check out a terrific 25-year retrospective of Tim Rollins and K.O.S. that will end on August 23rd. Featuring mostly very large paintings that span styles from graffiti to minimal, all inspired by "great literature," the show explores the impressive output of a collective that arose out of school workshops with the artist and his inner-city "kids of survival." 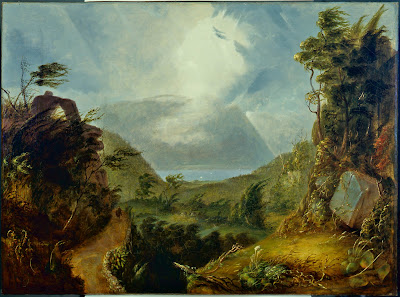