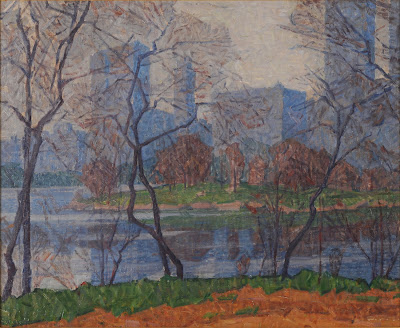 Ernest Bruce Nelson April in Central Park, ca. 1935-43, oil on canvas
The title of the current show at The Hyde Collection may be a bit of a mouthful, but that doesn't mean An Enduring Legacy: American Impressionist Landscape Paintings from the Thomas Clark Collection isn't also an eyeful. Drawn from a private collection numbering over 100 works that will eventually be donated to the Hyde, this selection of 64 paintings by 47 artists nicely fills the museum's ample central gallery and is sure to please lovers of traditional painting genres.
Thomas Clark is a Saratoga County-based private management consultant (who, incidentally, is not related to the family that founded the Clark Art Institute and other major museum collections), who began to form his collection about 25 years ago. Even at that time it would have taken almost untold wealth to pick up quality works by significant artists from the first third of the 20th century, so the group represented here consists mainly of second-tier painters who were well-known and successful in their day but are now largely forgotten. This review will consider the question of whether it should have remained that way, or whether these footnotes to American art history are worthy of recognition today.
This is a tough bill to fill - as it is, even American Impressionists of the highest order (such as Childe Hassam, Robert Henri, and William Merritt Chase) remain far less esteemed than their European elders (Monet, et al). The painters in this show were primarily students and lesser colleagues of these and other top-drawer Americans; for the most part, they could paint quite well, and the examples shown include some of their best work. However, I believe few people would make a strong argument that this work broke important new ground or carried lasting influence. 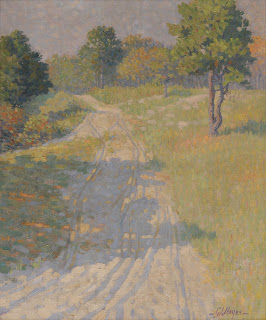 Looking at the show, I tried to ask myself a certain question regarding each painting: If someone brought this to me as a contemporary work of art by a budding painter, would I be impressed? Or would I be inclined to think the artist would never amount to much? While it isn't necessarily fair to judge historic art through a contemporary lens, it is still very instructive. I don't doubt that any first-rate work, from any era at all, in any style, would pass such a smell test.
So, how did the Clark Collection paintings fare? As a whole, I'm sorry to say, not that well. Most of the works, while competent, felt either amateurish, commercial, or touristy. Still, I'm glad to report that the best works in the show transcend these categories to deliver the kind of vital experience that one desires from the best art, whether visually, emotionally or symbolically.
Among these outstanding examples are some that fall neatly under the Impressionist label, including the show's signature piece by George Loftus Noyes (reproduced above left), Maurice Braun's almost-too-sugary but gorgeous Meadow in Spring and John Joseph Enneking's energetic small sketch titled Distant Sail.
Others have a distinctly Modernist edge, including a fine piece made under the auspices of the Federal Art Project by Ernest Bruce Nelson that may have been a study for a mural (reproduced at the top of this post); and Louise Upton Brumback's Grey Day, 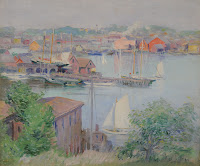 Gloucester, which presents a view of a harbor in winter that could almost have been painted by Edvard Munch. This piece is smartly juxtaposed with a lovely but more pedestrian view of the same harbor under summer sun by Alice Judson (reproduced at right). These two women, incidentally, are among seven included in the show - not an equal representation compared to the 4o men, but a pretty fair one considering the time frame.
Two of my favorite pieces in this exhibition fit between the Impressionist and Modernist parameters. One, titled Winter Landscape with Purple Hills, by Walter Koeniger, is among a large number of paintings here that depict snowy scenes, and is easily the most muscular of them in terms of both color and composition. It also has a lot of atmosphere - but not nearly so much as Arthur Clifton Goodwin's masterful depiction of a blizzardy squall in Boston, circa 1915 (reproduced below). That painting alone is well worth paying the Hyde's modest $5 suggested donation to see.
A catalog has been published to accompany An Enduring Legacy, with text by Hyde curator Erin Budis Coe, who will give a lecture about the exhibition at 3 p.m. on Sunday (Jan. 17). Coe, along with Thomas Clark, will be on hand after the talk to sign copies of the book. 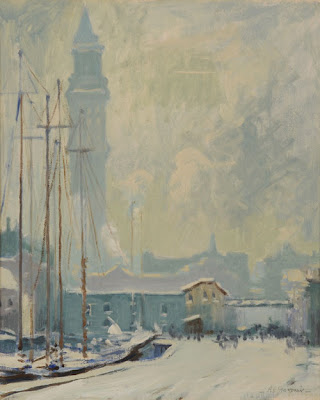 noting that I still drop by, just that I seem to have no time for pithy responses.

I liked the light -- some of it in thick strokes of paint -- of a winter Vermont landscape by Emile Gruppe.