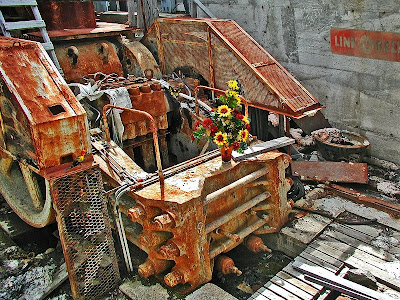 Two photographers who've been quite active on the local scene in recent years are presented in side-by-side solo shows at Fulton Street Gallery in Troy, with a reception on Friday (Jan. 29) that coincides with the always fun and eclectic Troy Night Out.

The three-room installation of 15 pictures each by Jim Flosdorf and Theresa Swidorski offers an opportunity to see each artist's work in depth (often impossible in the more common group shows) and to compare and contrast them as well. While Flosdorf's show is billed as a retrospective, touching on about ten years of output in digital color, Swidorski's is made up of two recent groups of images in traditional black and white.
The gallery's ample front room provides plenty of space in which Flosdorf's large, rather brightly colored work can breathe; the flat-mounted, minimally framed (or unframed) pieces use it well. Visually, and in terms of process, they are an amalgam of classic photography technique and painterly yearnings; some highly graphic, others richly detailed, they can be successfully viewed from a distance or up close. 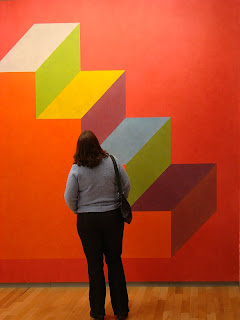 The newest image in the show (2010's Ore Crusher, shown above), is a crystal-clear example of what makes Flosdorf tick: it uses oversaturated color, gritty texture, romanticism, and playfulness to quickly engage the viewer and then keep the relationship going for a while.
Many of Flosdorf's other works (in this show or not) are much more complex than Ore Crusher, but they do not necessarily exceed it. One I particularly like, titled Grassy Inlet, plays a similar game of seek-and-find, while offering a much bigger world view, and more adventure.
Two other recent images in this selection were part of the 2009 Artists of the Mohawk-Hudson Region exhibition at Albany's University Art Museum, and were taken at the massive Sol Lewitt installation at MASS MoCA (one is shown above). These typify Flosdorf's more graphic approach, where color and shape are the dominant features, rather than intimate detail.
Other works in the show that hew in this direction were made inside a heavily graffitoed and trashed set of train cars. Unlike many of Flosdorf's photographs that are often highly manipulated in PhotoShop, these appear to be straight images. Another train image shows a moving engine that appears to be floating out of a pink haze like an apparition or a dream - it is perhaps the most like a painting of the photos in this selection.
Speaking of selection, one note on curatorial choice: While it is valid to do a retrospective show of an artist with ten years' worth of work to choose from (and I know from past viewing that Flosdorf has plenty of depth in the work made in that span), by taking many small slices of that work you run the risk of creating a show with a "best of" feeling, rather than an experience of the artist at his best.
I think it would have served Flosdorf (and the audience) better to have presented larger slices of a smaller range of images, thereby communicating the consistency and coherence of this artist's vision in a more complete way. 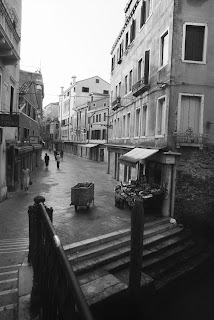 This, in effect, is what is accomplished in the smaller-scale, two part show of Swidorski's photographs from Italy and Ireland. A group comprised of eight pictures, all of them vertical 11x14's taken in Venice and Vicenza (one is shown at left), fits snugly along an upstairs balcony in the back of the gallery.

The carefully modulated tones of wet-processed silver printing take this work well out of the realm of the tourist snapshot, as does Swidorski's receptive, deceptively quiet eye for a meaningful scene. She often shoots in the soft light of early morning, relishing the surfaces and forms of her classic subjects.

This is not your sun-drenched Italy, but it definitely is Italy - presented from a certain point of view, but as and for itself. In a more personal category are the seven pictures Swidorski shows from Ireland in the gallery's back room (one is shown below).

These are printed larger than the Italy images, but also much more expressively - while some retain the sharpness and range of tones we associate with traditionally well-made black-and-white prints, others are dark and brooding, using great swaths of swirling graininess to capture and render atmosphere. This is where I think Swidorski starts to accomplish something special. While it is hinted at in the Italy pictures, the Irish weather allows Swidorski's emotional side to come out and play.

One favorite (not shown here), titled The Amazing Cloud at Inch, presents a rural landscape, its elements dwarfed by a looming, black stormcloud. A similar effect is created in another image titled Lost in Donegal. Swidorski can be comfortable resting her reputation on the strength of these two pictures alone.

If you want to go out and play, Troy Night Out will have many other shows also worth a look: painter Harry Orlyk at Clement Gallery; a group show at Martinez Gallery that includes many regional favorites (Flosdorf among them); Dan McCormack at the PhotoCenter; two new shows and an Ellen Sinopoli open dance rehearsal at the Arts Center; and much more. 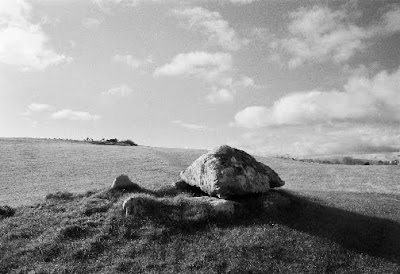 Posted by david brickman at 1:33 PM

You know, once a week is GOOD! (Better than no David at all.)

David: I really liked your picture of the painting with the colored steps. You did a good job of capturing the painting in a small space. Having the person in the shot not only shows that the artist's work is of interest but gives the reader a sense of the picture's scale.

John (and everybody else): That is not a picture I took - that is a picture Jim Flosdorf took at the Sol Lewitt exhibition, presented as part of the exhibition I am writing about here.

For further clarification: I do not take the photographs that are seen on this blog - generally they are provided by the artists or the venues for publicity purposes.