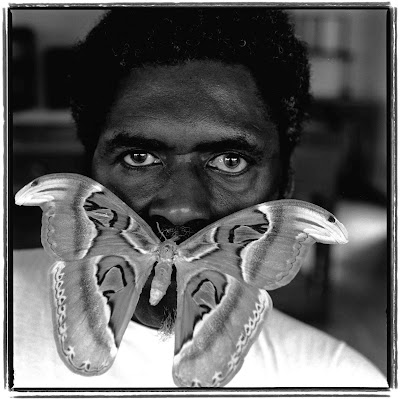 There is just a week left to see the Keith Carter exhibition at The College of Saint Rose's Esther Massry Gallery; it was closed for winter break and will be open again from Jan. 11 through Jan. 17, so try to catch it if you can (location, directions, and hours are available here).

The show, titled Poet of the Ordinary, comprises 77 elegantly made and precisely installed black-and-white photographs that date from 1972 to 1999, making it a curiously out-of-date retrospective for this still active mid-career photographer. Carter, a self-taught Texan, has published a lot of books, so a lot of this work is quite familiar to close followers of contemporary art photography - but the show is a real beauty that offers those of us who know the work a nice full immersion, and those new to it a comprehensive crash course.

There are two distinctive characteristics to Carter's body of work: The subject matter and the style. His subjects are usually alive, whether human or otherwise, except when he delves into the rare unpopulated landscape or, more often, a picture of an object. Carter's approach to these subjects has evolved over the long course of time represented in this exhibition, but it could generally be termed portraiture, and in this case we're talking about the personal sort of portrait rather than the commercial type. 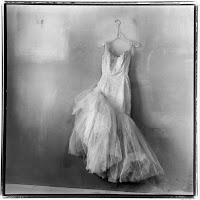 So, in addition to his pictures of people, when Carter photographs a dog (he's done many), a horse (ditto), or even some flowers in a vase or a dress hanging on a wall, he does it in a way that sweetly connects the viewer to the subject and warmly holds you close to it.

Stylistically, Carter presents his images toned to a warm shade of brown-black; all but a few have a raggedy black border and are about 15 inches square, and he tends to print a bit dark, giving many of his pictures an air of mystery. He also often allows movement to blur his images, enhancing this characteristic.

I once heard Carter say that "sharpness is overrated," and he demonstrates what he meant by that with about half this work, where two distinct methods of photographic unsharpness are employed. Nearly everything produced after about 1990 shows these effects (while the fully in-focus work is almost entirely from Carter's earlier decades of production). 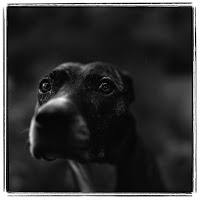 The first method is a common technique in which a very shallow depth-of-field allows the photographer to apply selective focus - usually to a plane in the foreground or background - which has the effect of setting some subject or detail apart from the rest of the picture and drawing our attention to it. More recently, however, Carter started to apply an innovative technique that allows him to make selective focus in a strip rather than a plane, again directing the viewer's attention to the sharper areas of the image, but in a much less natural way.

Some may argue that this slot effect is more natural rather than less - and they may be right - but it is definitely less "normal," in the sense of what normally happens by virtue of the camera's standard properties, and so it is far less commonly seen in the long history of photography than the more "normal" selective focus that happens in a plane. 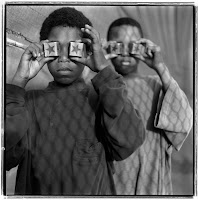 One of the results of Carter's experimentation with the slot technique is that it has become increasingly common - in fact, we can see it everywhere now in magazine ads and in gallery photographs, to the extent that I am getting quite sick of it. But that's not Carter's fault! He led and the others followed. Still, I have always found his technique gimmicky, and this show, despite its apparent sincerity, strong consistency, and great appeal, has not disabused me of that notion.

When I ask myself why such a good photographer should choose to shoot through a piece of plastic (or whatever it is that he does - I'm just guessing) all the time, I don't come up with a satisfactory answer. And when I see that the only shot in this show from the later years that eschews that method is, to my mind, clearly one of the best, I'm further unconvinced of the ultimate wisdom of his choice (that shot, titled Wishing Well, shows the coinage at the bottom of its titular subject glittering darkly up at us like a galaxy of stars, seductively and magically turning the act of looking straight down into the experience of looking straight up).

Taken as a whole, this is still a very appealing and strongly personal body of work, and it has had a good bit of influence on other photographers, which makes it important as well. The show is very beautifully installed, with attentive and entertaining groupings and juxtapositions that add a lot of fun to the process of taking it all in. 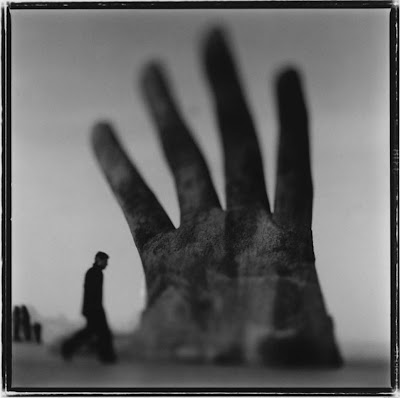 Posted by david brickman at 7:12 PM

So appreciate this blog, how great to have found it...only wish I had sooner! Heading to see the Keith Carter at St Rose on Tuesday. Have already browsed through the accompanying book for the show, incredible work. The prints must be astounding. Thanks so much for writing such great material!