Then & Now at Albany Center Gallery

A fine show fills the intimate spaces of Albany Center Gallery for its Then & Now exhibition, the latest in an annual series that brings artists who have previously shown at the gallery back for a fresh look. The 2010 edition of Then & Now features three women in mid-career who work in diverse media but have a strong affinity in their approaches to form, color, and content, making this a very well-matched selection. 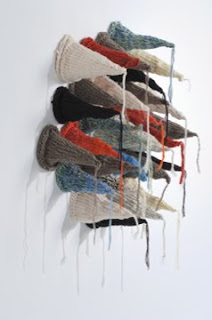 Mimi Czajka Graminski is essentially an installation artist who works in fiber. Her Knit Cones (shown at left) uses knitted wool and other fibers to make repeated hat shapes that are then grouped, distorted, and arranged differently for each installation. Many of the cones as presented in this show (there are more than 40 total) are folded in on themselves, emphasizing their resemblance to nipples; unfolded they seem like elongated breasts, an image that feminist artists commonly employ. Fortunately, Graminski doesn't take her work over-seriously, and the total formation of the colorful cones in a space about 10 feet wide is pleasantly playful.

Graminski extends this sense of play in three serial grids of embroidery on linen titled Morning, Evening, and Dawn. Unframed and floating a bit off the wall, the groups are highly textured, with vivid colors of thread and simple, almost childish imagery. The best of them, Dawn, relies on a teardrop motif and incorporates a lot of cutouts and additions to build dimension.

Graminski also occupies the gallery's most open space with two groups of forms in crocheted tulle fabric of bright, earthy, and pastel colors. Each group of six, suspended from invisible wires to make them appear to be free-standing, feels vaguely figurative; those titled Grow huddle together, while the taller shapes of Forgiveness appear to march across the space. 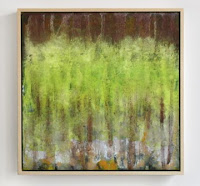 The painter Iona Park combines some unusual media in her gently cerebral, square meditations on landscape. Casein, gesso, dry pigment, and paper are among the materials she spreads, drips, polishes, sands, incises, rubs, wrinkles, and burns to arrive at deeply textural surfaces that must be examined up close to be properly felt.

All of Park's compositions work with a similar structure - usually one or two clear horizon lines and always a busy thicket of vertical gestures - yet there is plenty of freedom in them and a great deal of variety in the results. As interesting and emotive as her colors become, her titles are often evocative, too, adding to the poetry of this smoldering work (shown above at right is Effloresce; below at right is Carapace). 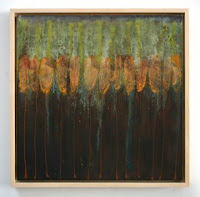 Park's paintings are small. Of the fifteen presented here, twelve are just a foot square, and three are 18 inches square, and they are arranged in such a way as to allow the viewer plenty of time and space for contemplation. It works perfectly.

Photographer Jeri Eisenberg completes the trio, with 11 works in her by-now recognizable modular style that breaks images into one-by-three-foot vertical strips of Oriental paper (hung in an ingenious free-floating manner with powerful magnets).

Like Graminski and Park, Eisenberg draws from nature but pulls toward abstraction and pure color. The range from yellow to red, with a lot of pure white setting it off, comes from the flowers and fall foliage she photographs, but Eisenberg's out-of-focus capture and ink-softened digital output gives these colors an even more ethereal presence than the delicate, dying forms they represent.

Then there is the structure of Eisenberg's "panels," which create a vertical image if one or two are used, a square with three, or a horizontal when four are put together (the show features all these options; a four-panel one is shown below). This design is clearly inspired by Japanese or Chinese scrolls and screens, and is compatible with Eisenberg's rather Oriental approach to nature in her art.

By employing the sequence of technical manipulations that result in these lovely creations (including the incorporation of encaustic), Eisenberg has all but left photography's traditions behind. Yet, they remain photographs, an important assertion that gives them a strength and directness they would lack if painted.

This work has gotten quite a bit of national attention in recent years, and it's easy to see why. Combining Eisenberg with the equally accomplished Graminski and Park makes this the region's first must-see show of 2010.

Then & Now is open through Feb. 27; there will be an artists' reception at the gallery during Albany's 1st Friday event from 6 to 8 p.m. on Friday, Feb. 5. 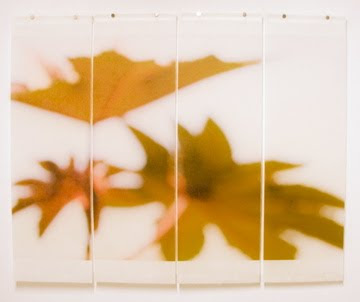