Those of you who have been reading this blog for a long time know that I very occasionally weigh in on movies - and the recent Oscar nominations provide a ready excuse to look back at the rather weak year that 2010 was for the filmic medium.
Year Two of having 10 Best Picture nominees (up from the traditional five) shows what a problem that number can cause under such circumstances - my own record of films seen in 2010 barely includes 10 films at all, and most of those were not Best-Picture-Oscar worthy in my opinion. Still, six of them have been nominated for Best Picture, so I can comment on those - and having not seen the other four won't stop me commenting on some of them as well.

I will start with those I've seen, in descending order of my rating, then go on to explain why I haven't seen the others (yet).

Now, for the Best Picture-nominated films I haven't seen, in the order I may see them in:

Overlooked: Babies. I can't understand why this French-made documentary isn't nominated in its category. Of the five feature-length documentary nominees, I've only seen one - Restrepo - and it was amateurish in comparison to the lyrical, beautiful, nearly wordless human nature film Babies. See it and be charmed by who we are. 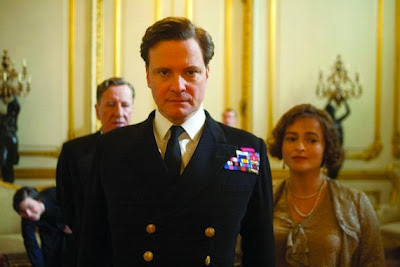 Colin Firth, Helena Bonham Carter and Geoffrey Rush in The King's Speech
Posted by david brickman at 10:26 AM

127 was amazing on the big screen, but I don't think the theater experience is necessary on that one. Definitely watch it if you get a chance, it's an amazingly interesting depiction of what's really a pretty boring slice of time.

I have Winter's Bone on my Netflix. as you know, I did love The king's Speech, and even tho it's small film in some ways, I found it very affecting.

BTW, I saw Toy Story 3 with wife but sans child.

I liked Winter's Bone OK, but thought it's big flaw was it did not show the physical and other effects of meth addiction. King's Speech was good, too; but I didn't see "True Grit" as much different from the John Wayne version.

Dave - - Excellent call on the movies that you saw. I liked your observation about how King's Speech, a relatively low-key movie, was such a standout among the present nominees. If you wait for Kids are All Right to be on DVD, that will be ok. It's a good movie but I do not see what all the excitement was with it.

Curious if you've gotten around to seeing Black Swan yet....and if you have, what did you think?