The Jewel Thief at the Tang Teaching Museum 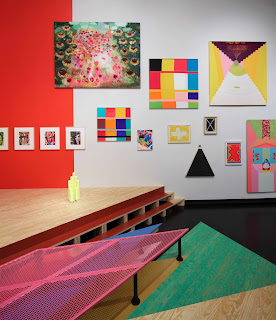 Think what it would be like if you had a friend with a really wild modern art collection, and you were invited to hang out for a while in their home gallery. Now imagine that the living room/gallery is more of a playground, built on a giant scale, with a soaring ceiling, broad swaths of bright colors and shapes on the walls and floors, a series of huge blocks marching through the middle of it, and viewing stands of varying heights from which to take it all in.

This Alice-in-Wonderland scenario is what it’s like to experience The Jewel Thief, organized by Skidmore College’s Tang Teaching Museum curator Ian Berry in collaboration with Yale University administrator and sculptor Jessica Stockholder. Publicity for the show aptly describes it as “immersive” and it’s true that one can feel a bit like they’re drowning in a sea of so much art; also describing it as experimental, the show’s organizers clearly want to lead viewers into a place where they can experience abstract art in a new way.

The more than 100 works in the exhibition by 60 or so artists include a significant number from the Tang’s permanent collection, while the rest were borrowed from artists, collectors and commercial galleries; some of those were designed and installed specifically for this show. Almost every common medium is abundantly present: painting, drawing, sculpture, and textiles, as well as decorative media such as wallpaper, furniture, and light fixtures. Printmaking is represented by just a handful of items, and photography is entirely absent (unless you count the one color photograph by Anne Delaporte, which is entirely covered in gold leaf and therefore invisible).

The historical sweep of the show is also broad, with at least one piece from every decade going back to the 1950s – but it is by no means a survey (nor intends to be), and the great majority of the works date from 2000 or later. The show is perhaps best summed up as an amusement park designed by two connoisseurs of abstract art who had access to tons of great material and could think of nothing more fun to do than to present it all to the rest of us in a fresh way.

This is accomplished by various stratagems. Take those blocks, for instance. As you approach the Tang’s main gallery from the museum’s entrance, you confront the first of them: a 13-foot cube painted on most of two sides in camouflage (following instructions by Jim Hodges), it shares dominion over the space with a large, permanent staircase, a temporary structure of metal bleachers (one of the show’s viewing platforms), and a seating group by the artist James Hyde. One has room to move around the cube, and is free to climb either staircase for a view from above, but the siting of it sends an immediate message that this is a show that may mess with your perceptions – or your preconceptions.

If, like me, you should choose to squeeze past one corner of the big cube toward the gallery entry (not birth-canal tight, but suggestive enough), you would find that entrance somewhat blocked by a second cube 10 feet high, which, like the other, is festooned with art (a surprisingly great many pieces in this case). Several other blocks follow in an angled line through the big room, ending in one just two-feet cubed, with a single small sculpture perched upon it (and too low for my middle-aged back’s comfort).

Once inside the room, you begin to discover other curiosities about the installation. A large wooden platform fills one corner, with a series of colorful and sharp-angled other platforms of varied heights stepping up to it. This, you soon learn from the helpful staff, is a sculpture by Stockholder – and, yes, you are expected to walk on it if you wish. A couple of other sculptures sit upon it already, which surprised me at first, but it is not the only instance in the show of one person’s art being mounted atop another person’s. 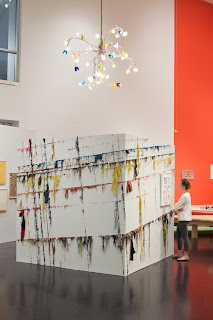 The rest of the room features different kinds of floor and wall treatments, from a Batcave-like space created by Liz Larner to cradle some of her porcelain works (and, no, you are not expected to enter it) to the aforementioned swatches of bright geometry on walls and floor. Pictures are hung salon-style throughout the room, in lines and groups and crowds that sometimes go up quite high. This is true outside the main gallery as well, and that’s where the scaffolds and steps come in so handy. (Mental note: I must try to remember to bring a step ladder to the next big museum show I visit.)

A printed guide with color thumbnails and identifying information for each artwork accompanies the show (which, wisely, has no labels), resulting in a treasure-hunt atmosphere for those who pick it up. This became a big part of the fun, because, believe me, not every work of art was immediately easy to spot. Also, as it turned out on my visit, the last page of the guide had become (temporarily?) obsolete, as several works had been removed from an upper “bridge” in the museum to make way for a new show’s installation. My guess is that they will be replaced after the upstairs exhibition’s packing crates are safely out of transit.

You may have noticed that I am not saying much about the specific artworks in The Jewel Thief. This is not because they are unworthy of comment – indeed, there are many wonderful works on view, by people most of us already know about (examples include Andy Warhol and Joan Mitchell) to folks I’ve seen in other Tang exhibits (such as John Torreano and Allan McCollum) to relative unknowns, and even a couple of locally shown artists (Victoria Palermo and Christopher Harvey). Some of these artists are represented by just one piece, while a few have as many as five or more on view – but in any case, this is a show that seems meant to be perceived as greater than the sum of its parts, and it makes the parts themselves seem relatively undeserving of specific comment.

Now, smarter people than me have addressed the issue of curator vs. artist for a good long time, and I don’t expect to add much to that discussion here. In fact, I think there was a panel discussion about that subject presented last fall as part of the programming around The Jewel Thief (the show opened in late September). So, suffice it to say that this show brings the issue up – big time.

I have to wonder: Do any of the artists in the exhibition feel used? Or do they feel exalted by inclusion in such an important and interesting event? I suppose some artists have smaller egos and are genuinely happy to be part of the greater whole (after all, whether they like it or not, they are merely a part of the contemporary scene, and an even smaller part of the whole history of art and culture). But I also suspect that a lot of artists, known to have big (and sometimes quite fragile) egos, may be feeling vaguely bad about it. Not as bad, perhaps, as those left out, but still …

All that arguing aside, make no mistake - The Jewel Thief is a heck of a fine exhibition, with a ton of really beautiful drawings, paintings, sculptures, installations, etc. in it. You have until Feb. 27 to take it in – be prepared, once might not be enough. 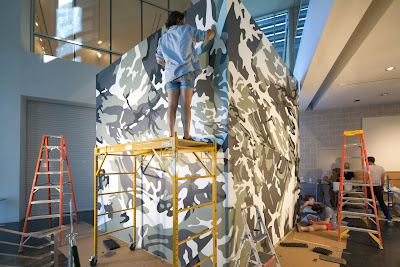 Photographs by Arthur Evans, provided by the Tang
Posted by david brickman at 5:25 PM