The World According to Willie

Willie Marlowe: A Survey 1977-2010 has opened at Sage College of Albany's Opalka Gallery; there will be an artist's reception there on 1st Friday, Feb. 4, from 5-9 p.m.
I've seen the exhibition, and it is exquisite. But, because I was commissioned to write an essay for the show's catalog (which also contains an essay by E. Tornai Thyssen), I won't be writing a review. Instead, below are a few key images from the show, along with the text of my essay. Naturally, I highly recommend you go see this wonderful work. 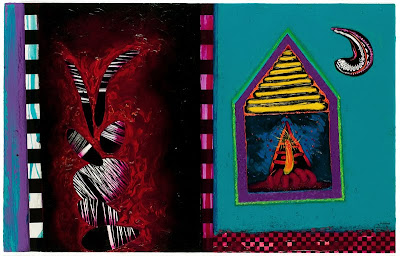 Hot Coals and Feather Moon 2009 mixed media on paper 13.5" x 21"
The World According to Willie
It’s been almost 30 years since I first met Willie Marlowe, but she never ceases to amaze me. Demurely Southern, with a deliciously acerbic undertone, Marlowe is quiet but frank, extremely reliable, and remarkably committed to her work. For the many years she taught at Sage, she was also strongly committed to the students – but there was never any doubt that painting came first, clearly manifested in a relentlessly constant studio practice, which in turn set a fine example for her devoted students to follow.
I see Marlowe as having had two sides all these years: The single-minded painter isolated in her studio, continuously bringing mountains of rich artwork to life; and the joyful, attentive friend, teacher, and collaborator who issued a steady stream of letters (and, after a certain date, e-mails) as well as mail-art pieces and curatorial projects, all bearing unparalleled enthusiasm for other artists’ activities. She is that increasingly rare person who always picks up the phone if you dial her number. Yes, she’s home in the studio painting feverishly and, of course, she has time to talk.
Painters do work in isolation – it’s a necessity – and, as with all good painters, Marlowe’s work is truly a world unto itself. With the majority of her pieces being small and jewel-like, suggestive but usually abstract, and created with non-traditional techniques, it would be easy to think that they represent a primarily inward-looking process. However, that would be a grave misapprehension. In fact, Marlowe’s work is deeply informed by the world around her, and particularly by her travels.
A brilliant colorist, Marlowe added black to her palette after stints as a visiting artist in Barbados in 1986 and the Yucatan Peninsula in 1993, where she experienced the sudden drops to nightfall typical of places near the equator. The vivifying effect of black on the other colors she employs recalls for me another favorite painter, Henri Matisse. Caribbean influence also appears in the lushly lit and exotically populated underwater gardens of many of her paintings made in that period and since. And a longtime theme of houses took on new flavor with the hurricane-threatened shacks of another series that came out of those island visits. 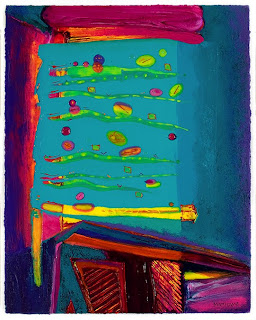 Adding to the Mayan-inspired ziggurats and labyrinths that have always fascinated Marlowe (and which show up in tantalizing concrete poetry pieces as well as recent digital paintings), trips to Ireland in 1997, 2001, and 2005 brought ancient stone monoliths into her daily vocabulary. They found good company there with Marlowe’s various references to cave paintings, calligraphy, architecture, and historic maps. And then there’s Venice, which she visited in 1984 and 1989 and then returned to in 2006, 2008, and 2010 for artist’s residencies.
As a source for Marlowe’s dazzlingly layered and transparent colors, Venice is almost too obvious. The sun glinting off the water, the fresh and weathered colors of the houses and palazzos, and the mesmerizing glass, born in fire, all fit Marlowe’s vision like a glove (one 2010 example, titled Glass Games, is shown above at right). Recent years have found her spending longer and longer stints in that magical island city, where incidental facts of life such as the absence of cars and the presence of cats resonate with the Willie Marlowe I have always known, and where she clearly comes alive in new ways.
The work inspired by her stays in Venice is perhaps most meaningfully captured in Marlowe’s use of portals. The city has countless covered passageways, doors, and windows that suggest these arched entries into and out of the paintings. While her work has always been given to structure, the more recent Venice paintings take on new aspects of architectural rigor, sometimes flattened into pre-Renaissance perspective, other times opened into multiple dimensions. Stage-like spaces are often suggested as well, wherein Marlowe’s biomorphic figures dance and swirl, a connecting element through most of her work, whether painted, constructed or collaged, whether brightly colored or in black and white, whether shiny, flat or textured. These gestural forms represent life, ideas, dreams, poetry, fabric and glass – everything that embodies the precious elements of Willie’s world.
Stepping into that world through any of the many entries she offers gives the viewer of a Marlowe painting or series a new experience, belying the deeply historic sources that inform it. Ultimately, it is this freshness, inexplicably available to the painter in her studio over decades of constant effort, that makes the work irresistible. Equally, the artist’s rigorous attention to detail, masterful technique, and commitment to a personal vision make it lasting – and important.
David Brickman, October 2010 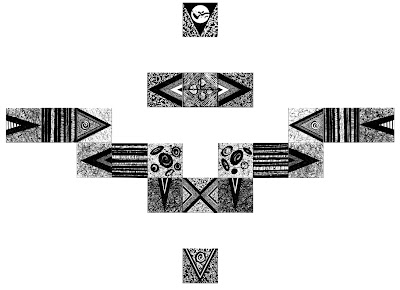 David, big applause. A wonderful essay, perfectly evocative of Willie and her art, and beautifully written. Bravo to you, and congratulations Willie for the retrospective.

Tim - you are too kind. For folks who don't know: Mr. Cahill was once my editor, so you can imagine the kind of comments I got from him then! Guess he taught me a few things ... -db

Facebook and Get Visual have just given me a great preview of Willie's beautiful new show at Opalka. I can't drive to Albany until mid-February but I feel that I have seen a lot already this way. David, this is a really fine essay full of descriptive insights that support Willie Marlowe's consistently fine work. Willie always inspires me...KK