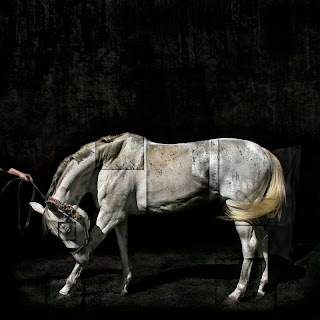 Regional is an invitation-only affair for the third time in its history and the second time in a row when hosted by the Opalka. In 2006, Wilson chose the artists himself, hewing mainly to familiar faces and oft-recommended latecomers (full disclosure: I was included); this year, he recruited exhibiting artist and Amrose Sable Gallery director Elizabeth Dubben to curate the show, and her choices are a complete departure from past Regionals.

Purists may find little they like at this latest incarnation of a cherished Capital Region tradition, but I hope they will go with an open mind and come away with it expanded. While none of the work breaks new ground in a dramatic or controversial way, it is almost entirely of the postmodern ilk - few of these images could be confused with anybody's snapshots or the earnest efforts of photo club aficionados.
Several categories that have dominated the contemporary dialogue in photography-based art are evident in abundance: multiple imagery; things made to be photographed; pictures intentionally out of focus; and pictures made into objects.
Out of 13 total participants, more than half have University at Albany connections (Justin Baker, Liz Blum, Robert Cartmell, Colleen Cox, Tara Fracalossi, Daniel Goodwin, and Ken Ragsdale) and at least one is a major international name (Catherine Chalmers). Others are revelations, at least to me (Roy Arenella, David Seiler, and Stu Sherman), or were only recently seen for the first time (Laura Gail Tyler and Melinda McDaniel, both at the Arts Center of the Capital Region in Troy).
So the show is fresh and has a distinctly different focus than pretty much all the past Regionals.
Close observers of the scene, however, will notice some repetition. For example, Baker's fine, rephotographed color collage constructions were all seen at his UAlbany MFA thesis show a couple of years ago; Tyler (see image at bottom of this posting) showed the same four pictures (along with many others) in a strong solo show at the Arts Center in 2007; and Ragsdale's wonderful memory reconstructions were featured in a recent solo show at the PhotoCenter in Troy.
Among the out-of-focus shooters are Blum, whose ethereal depictions of barely recognizable confections speak to desire and the thwarting thereof; Sherman, who presents three large unframed color prints of industrial subjects that I expect would appear rather uninteresting if not slashed through with fuzziness; and Cox, the better of whose three pictures shown here is earlier and sharper than the other two. I think it was Keith Carter who famously said "sharpness is overrated" - but so is unsharpness.
Two artists in the show present unabashedly romantic images. Seiler, who employs an overlaying of multiple images and other effects to create an intentionally painterly look (see image at top of this posting), has horses as a subject in three of his, and they stand out both for their techniques and their emotionality. 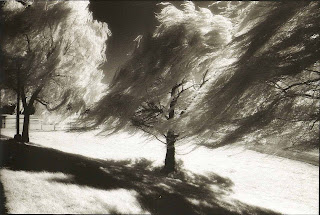 Cartmell (his Three Willows is shown at right) shoots infrared film and prints it on traditional gelatin silver paper, achieving an atmospheric lushness we rarely see anymore in contemporary art. His views could be interpreted darkly - but I see them much more as dream than as nightmare.
Perhaps the most challenging work here is by Fracalossi, who teaches and directs the gallery at Hudson Valley Community College. She has built up curious partial grids of multiple, repeated images that demand time and thought from the viewer, like poetry. A short video that includes similar imagery (details of nature, water, trees and cities) as juxtaposed pairs helps unravel her process.
Related to Fracalossi are the elegant, efficient wood and pinned-print constructions by McDaniel, two of which draw the viewer in to scrutinize tiny figures captured alone, then pressed into a group. This work impressed me by its clarity of meaning and the way it transforms and transcends media. Her other pieces that I commented on in an earlier posting, still on view through March 22 in Mutatis Mutandis at the Arts Center in Troy, are consistent with these.
One criticism I have for the curating is that the Photo Regional, when held as a juried competition, normally seeks to show only the latest work from entrants. But several of this group have included much older work - from 2005 (Tyler), the 1990s (Goodwin and Chalmers), and even back to the '70s (Arenella). This is unfortunate, as it takes away from the dialogue about hidden aspects of our current scene that I think is this show's real intention.
To add to that discussion, a panel will meet at the gallery for a public event at 7 p.m. on Monday, March 23. The panel will be made up of UAlbany professor Daniel Goodwin, Aperture publisher Lesley A. Martin, arts writer Meisha Rosenberg, and Center for Photography at Woodstock Director Ariel Shanberg.
And, of course, there is tonight's 1st Friday opening from 5 to 9 p.m.
http://www.sage.edu/opalka/currentshow/ 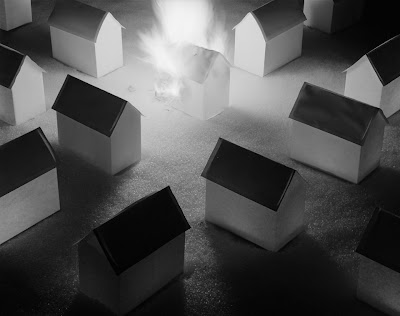 Posted by david brickman at 6:01 AM

Sorry that I missed the opening, but was able to swing by a few minutes ago and had the gallery to myself! I felt there was a lot of strong material there but must say that Melinda McDaniel's work held the greatest interest for me. Loved the deconstruction of traditional photographs and re-construction in a very different form of art.

I am looking forward to next year's photo regional.