While the Albany Institute of History & Art has committed its whole second-floor gallery space to the yearlong Hudson River Panorama exhibition to mark the 400th anniversary of Henry Hudson's voyage of discovery, there are many other features to the exhibit that have a shorter shelf life. Among those are shorter-term exhibitions and a lecture series (more info here: http://www.albanyinstitute.org/).

Currently filling a lovely, large octagonal room and its smaller, square parlor on the museum's third floor is an exhibition of 21 photographs titled Hudson Valley: Spanning the Banks by New York City artist Harry Wilks (through June 7 and with a reception on April 3). It's a fine addendum to the HRP show, which is a vast history lesson that incorporates a lot of significant (and not so significant) fine art, but which lacks the coherent vision offered by a solo show such as Wilks's.

Drawn from an ongoing, long-term project that places Wilks along the edges of the Hudson River from New York to the Highlands, Spanning the Banks neatly presents his way of seeing, which is quirky, clean, geometrical and allusive. The prints are not particularly large - just big enough to hold their own on a wall and let the viewer enter them visually - and they are well enough crafted to merit and reward close scrutiny.

All but four of the images in the show are traditional black-and-white gelatin silver prints, and all but two of the black-and-whites are panoramic views made with a Widelux camera (the other two are a traditional format image and one made with a different type of panoramic camera). This is important to mention, because the Widelux uses a panning system that distorts the subject, and can make it nearly impossible for the shooter to know what the final composition will look like. The consistency with which Wilks composes images using the Widelux shows a great facility with the medium; equally, he has exploited its tendencies to make a strong body of work with great shapes and a particular look.

I love the way Wilks regularly sets himself up specifically at the edge of a road, so that the guardrail is at the center of a composition, or becomes a sweeping element that connects other objects in view. He'll do the same with other elements - fences, rocks, walls - and with bridges, which are as much his subject here as anything.

Of course the river is his subject, too, but there is so much else going on in these pictures that I found I had to keep reminding myself of that fact. The wide-angle view of things, coupled with Wilks's tendency to set objects very close to the camera, makes for fragmented compositions that move the eye all about. The river is just one element woven into Wilks's inclusive vision, where all things are somehow equal.

The few color pictures in the show, and the one non-panoramic black-and-white are placed in the parlor area, and they are a bonus rather than a distraction from the panoramas, because they share the same sensibility and subject matter (such as a view from the Bear Mountain Bridge, seen below). A small catalog also on view includes a number of the pictures in the show along with quite a few more color pictures not seen on the walls, and they demonstrate that Wilks is as adept with color as with black-and-white, and that his strong style of composition is consistent throughout.

I recommend the show, and the catalog, to all fans of fine photography. 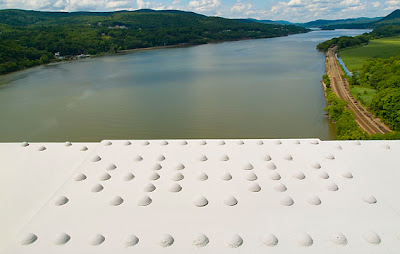 Posted by david brickman at 2:19 PM

I'm a longtime friend and thanks to many conversations, know something of the diligence that precedes Harry's click of the shutter. He takes the exploration of his favorite themes to frequently unexpected and notably high places.
I'm delighted to see color in his most recent work, an further measure of an accomplished artist continuing to grow.

harry wilks is a brilliant photographer(artist) i have been familiar with his work for the last 42 years. harry's earlier works took an entirely
different subject seen with a similar eye. his work was of n.y.c. building scapes. he gained access to roof tops and and hidden places that very few get to see. these urban canyons and his rural depictions are true to his style,composition and celebration of place. wether he is shooting country roads or concrete panoramas.he is always true to form. i am proud to know his work.
doug eisman,jackson new jersey

Being an alumni of Harry's high school graduating class, I have been following his excellent work for many years and I must say all his work is "A+".
THANK YOU HARRY.

Truly an original eye on a much-depicted landscape. His camera gives us a vantage point we can never capture on our own.