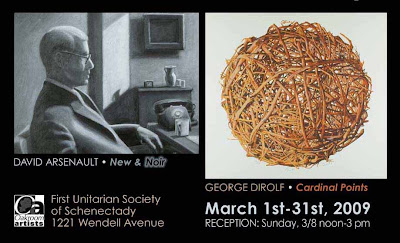 With so many high-profile galleries and museums now gracing our region, it can be easy to overlook the smaller, more community-based art entities that have served artists and audiences when things maybe weren't so good. Among the most venerable of such institutions is the Schenectady-based Oakroom Artists http://www.oakroomartists.com/, which has existed for 52 years as a membership organization mounting professional exhibitions, and is currently sited at the First Unitarian Society's landmark "Whisperdome" building on Wendell Avenue.

Oakroom membership is limited to 24 carefully chosen painters, printmakers, sculptors, and fiber artists, each of whom get a showcase exhibition every two years in the group's ample, well-lit space. Because the gallery is quite large, these shows happen in pairs; the current duo of David Arsenault and George Dirolf are showing together for the fourth time, so it really can be considered a two-person show rather than two solos.
Arsenault, whose work has been compared to that of Edward Hopper (with good reason), has

mounted a selection of 15 oils on canvas that reflect the range of his style, which is lushly lit, colorful, and usually features architecture involved with landscape; people appear, but almost just as accents rather than as the subject of the picture.
A couple of new additions in monochromatic gray are much smaller than his usual scale (one is a Pop-inspired still life) and add an element of the Surreal (think Magritte), which may be a promising new direction for this highly skilled painter. Arsenault markets his work under the title the art of solitude, but a recent remarriage has brought his imagery a tiny bit further into a social place, as reflected in the piece that for me is the show's standout, Second Story (shown at left).
Dirolf's exhibition consists of about half oil paintings on board and half wood engravings, totaling 30 pieces. All but one of the works are quite intimate in scale, but they still pack a punch. The oils, all of them landscapes painted en plein air, mostly represent dense woodland or streamside trees, playing fast with layers of space and foliage and

pushing the eye around the surface and back and forth with darks and lights.
Dirolf is a high school art teacher, and he certainly has his skills honed, but I wish he would take some of these ideas to a more developed state - they are beautiful, but sketchy.
That brings us to the wood engravings, which are truly masterful - illustrations, yes, but full of life and feeling (one appears at right). These were created while on sabbatical and inspired by Shaker subjects that Dirolf has been researching; they don't illustrate any particular text, instead forming a sort of quiet story of their own.
Doubtless you've heard about the Rockwell Kent show currently at the New York State Museum (if you haven't seen it, go). You can get a double shot by seeing the 20th-century master engraver there, then stopping by to see a worthy 21st-century successor at the Oakroom. Dirolf is that good.
Posted by david brickman at 4:30 PM