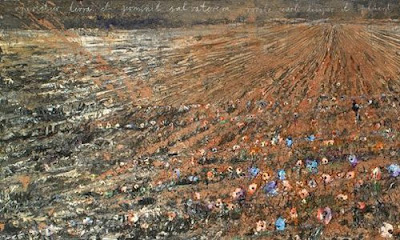 Marshall McLuhan said the medium is the message. I think Matt Bua might say the context is the medium. His installation in MASS MoCA's newly expanded and relocated Kidspace spills out through a second-story window into the museum's entry courtyard; it is haphazard, overstuffed, ripe for criticism. But, hey, it's for kids! So I won't get all snooty about it.

Cribs (tiny detail below) is a play on architectural ideas, a 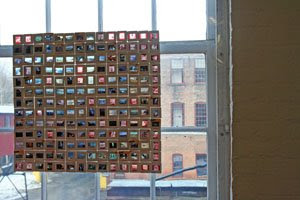 commentary on collecting, and a never-quite-grew-up kid's ebullient spewing of undigested detritus into a grand, half-assed construction that meanders all over creation and offers lots of little discoveries along the way. As a whole, it's a mess that all children will love.
But it's also for adults, and that's part of the message: Kidspace, under the curatorial eye of Laura Thompson, is hosting installations by name artists, and the serious art audience that frequents MASS MoCA is welcome to check it out. Hours are limited: just weekend days from 11 to 4 through May 31; then every day but Tuesday through June 27; then every day through Labor Day. (for more info on this and other shows, go to http://www.massmoca.org/search_results.php?st=2&search=11.)
Meanwhile, the other spaces at the sprawling former factory complex offer the usual very high quality, cutting-edge stuff. A long-term Anselm Kiefer installation that will remain through October fulfills the promise of this most revered of contemporary artists with five paintings and a massive sculpture that I found very moving (a large detail of one painting is at the top of this posting).
Kiefer's work is, in a word, elegiac. This installation proves that it is also lyrical and hopeful, though the darkness may overwhelm the light for some viewers. In addition to the concrete sculpture's allusive waviness, three gigantic paintings that form a cul-de-sac in a second room (accompanied by a large Joseph Beuys sculpture) are deeply felt and meditative.
A much more fun experience is to be had in a large group show titled Badlands: New Horizons in Landscape that fills a ramble of large and small spaces on the museum's main floor with fresh and juicy art that revisits a potentialy banal subject and brings it quite vividly to life. The A-list names in Badlands are many - Mike Glier, Alexis Rockman, Mary Temple, Nina Katchadourian, Ed Ruscha, Robert Adams, etc. - and the missed marks are few. But hurry, as it remains on view only through April 12.
Possibly the strongest single work in the museum at the moment is a stunning pair of sculptures (with an evocative pierced presentation wall leading to them) by Simon Starling titled The Nanjing Particles. These esthetically beautiful cast stainless-steel forms were created by selecting two silver particles from a 19th-century photograph of Chinese strikebreakers brought to work in North Adams, then enlarging them a million times.
It is poetic justice that the casting work was done by factory workers in China; the carnivalesque wall bears a huge blowup of the original picture of their forebears. This ingenious work is shown in the vastly cavernous space of Building 5, and the yards of air around it are a tonic. It will remain there through October.
Finally, I can't publish this review without mentioning what you already know: that the Sol LeWitt wall drawings at MASS MoCA are fabulous, that they will be there for at least 25 years, and that you really want to see them as soon as you can because you will want to go back again and again and again.
Posted by david brickman at 7:09 PM

Great luck running into you today at MASSMOCA. Agreed, the particles are a beautiful, when viewed from a distance as well as when examining one's own reflection within them. I could do without the huge, pierced photo wall, it did not add to the experience for me and felt "trade show". I would have preferred having to seek out a very small photo mounted on a wall somewhere in the gallery. I found that the "these particles are very small bits from this photo" trick fell flat. I was turned off by the use of scale in such an obvious manner.
rl