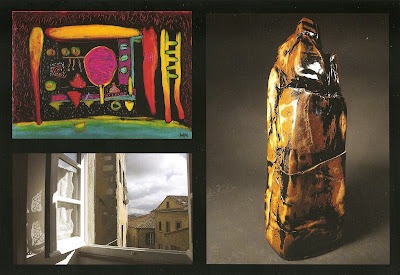 A lot of shows and spaces were celebrated at last Friday's Troy Night Out, including one up the hill at Emma Willard School's Dietel Gallery http://www.emma.troy.ny.us/arts/dietel_gallery.php.

That show features a trio of Sage College of Albany art faculty in an exhibition inspired by sojourns. Also a strong draw were downtown shows by John Hampshire at Clement Art Gallery http://clementart.com/ and Gail Nadeau and Katherine Wright together at Fulton Street Gallery http://fsgtroy.org/html/index.php.
Sojourns to Ireland and Italy: Marlowe, Martin and Morrell (images shown above) takes full advantage of the long, narrow Dietel space to present three artists working from the same inspirational source (sojourn vi. to live somewhere temporarily), but in diverse media. Gallery director Susan Hoffer deserves a mention for the skillful way she intermingles the show's 30 works (10 by each artist), creating a comfortable flow and interesting interactions for the viewer.
Willie Marlowe (recently retired) makes small-format, abstract, acrylic paintings in day-glo colors that are almost scientific in their forms and atmospherics. I have followed her career for a long time, and always marvel at how she remains consistent but fresh. Changes occur, usually gradually; in this show there is evidence of a slight shift toward representation.
A trio of works that hold the center of the exhibition, and form a neat group on their own as they jump from red to green to purple, include two that directly reference being underwater in their titles, while showing what that may look like: Beneath Murano and Murano Aqua Alta (Murano is an island in the Venice lagoon). Another painting nearby, Adriatic Low Tide, with its streaks of green showing through scraped black paint, is similarly literally titled. Still others reference art glass. It will be interesting to see what comes next from Marlowe.
Tim Martin is an accomplished ceramic sculptor who has created modest monuments to the rock formations he saw in the cliffs of Ireland. Martin cites architecture as another source, referring in a statement to the works as "geoarchitectural fragments." His titles are most evocative of places - The Great Skellig, Dromberg Dolman, Bolus Head and so on - but I also see human figures in some of them, particularly the latter, with its black glaze and tapered shape.
Martin's work has evolved from tightly geometric forms to a freer-flowing style, and his glazes in these pieces are rich in earth tones, with surface textures that vary from flat to glossy. Chunky, and with cracks prominent, they reflect a mellowing of the artist and his techniques.
Linda Morrell applies masterful digital photography skills to make naturalistic images of townscapes and other scenes in Italy, successfully avoiding the pitfall of manipulation but not steering entirely clear of cliché. One example: Gondolas photographed in Venice.
But the majority of Morrell's images are well-seen and unsentimental, emphasizing light, shadow, texture, and color (usually in that order). One, titled Levando gli Occhi (Looking Up), transforms its subject, a simple courtyard, into a study in three-dimensional space. Another, Carole's Window, is irresistibly romantic, yet crystal clear.
Morrell also presents three pieces that involve encaustic (wax) on boards - though photo-derived, they look more like frescoes. Not among my favorites, they are very popular with the gallerygoers I've heard commenting on them at Dietel and elsewhere.
The two-person show titled La Femme that features Gail Nadeau and Katherine Wright at Fulton Street Gallery is another tour de force of photographic technique, but quite unlike Morrell's work. Here we have women from diverse generations (Nadeau is a grandmother, Wright is just 23) who have approached the subject of woman from different perspectives and with different styles and methods. 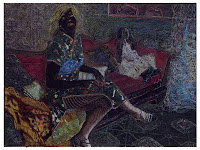 But they come together in multiple ways, first of all because both are very much about process. Nadeau (her Two Dolls is shown at left) has been known to paint on pictures or slides, then reprint them and maybe do it again, creating layers of meaning and a strong push-pull between photographic "reality" and the one she creates. In her works shown at Fulton Street, there's also digital reversal going on - in the end, it's impossible to tell where the photograph ends and the painting begins. 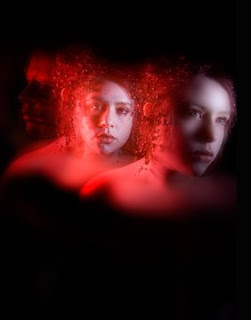 Wright, meanwhile, is all about the control in the studio (her Sides of Myself is shown at right) - her pictures are highly manipulated and constructed before they are put on film, where they remain untouched by digital processing. Instead, she creates the image through the choice of model, costumes, makeup, lighting, and sometimes multiple exposure.
The second obvious connection between Nadeau and Wright is that they move in and out of viewing or expressing their subjects from within and without. We get a woman's point of view about women - in Nadeau's case, often through generations of relationships and in Wright's case as myth and muse. Both are not shy about sexuality, though it's presented obliquely.
As a male, I won't try to interpret too much of the content - but I can assert that it's a fascinating show, impressive in both its quantity and quality.
Equally fascinating is John Hampshire's collection of drawings at Clement titled More Than Just Lines. My objectivity about Hampshire could be influenced by our friendship, in addition to the fact that he has included a portrait of me in the show (in which I look about 100 years old), so keep that in mind. Further, he has chosen to use a long quotation from a review I wrote of his work before we met as publicity for the show, so you may want to be even more skeptical.
Still, I have to say that there is strong work to be seen here, including some earlier work that provides interesting perspective on the new stuff, and things not seen before in public that are not new but exciting nevertheless. Most notable are the pieces that represent Hampshire's entry into landscape imagery - or weatherscapes, if you will.
Labyrinth 220 (most of Hampshire's titles refer to his technique of drawing with elaborate snakes of lines - labyrinths - that appear abstract up close but congeal into representational renderings from a distance) is his best yet: a black thunderhead hovering above a landscape, swirls of lines forming a topographic effect (or an eye-of-the-storm one), darkness building. Executed in Sharpie pen on a prepared surface that is very much like a white dry-erase board, this and the other drawings in the show reveal why I say Hampshire is one to watch. 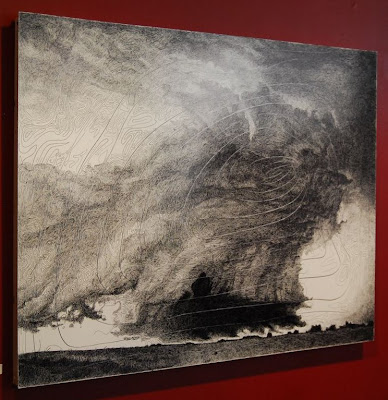