Have you ever tried to describe a crazy dream you had, or tried to follow someone describing such a dream? Then you will have some idea what it's like to experience the large exhibition Entertaining Doubts by California artist Jim Shaw at the Massachusetts Museum of Contemporary Art in North Adams. Shaw draws a great deal from his dreams, and attempts to manifest them physically through sculpture, painting, and installation.

Alas, it is not an entirely successful effort, just as none of us has ever really adequately articulated our own dream or understood another's, but a lot of compelling and enjoyable art is created along the way, so it's also not a failure. Shaw has great skills in drawing and painting, and a good understanding of the theatrics that go into effective installations, and MASS MoCA gives him plenty of space to spread out in.

A signature of the show is Shaw's re-use of discarded painted theatrical backdrops. The worn texture of these huge curtains of muslin, and their time-softened colors, are very appealing, and Shaw makes the most of this appeal by limiting his interventions to partial overpainting or, in some cases, simple reinterpretation by the placement of flat figures in front. Shaw also takes smaller cuts of the backdrops and paints on them like stretched canvases. These are some of the best works in the show, perhaps because it is easier to digest them, or because smaller works can concentrate the idea better. (Mind you, in this context, small is relative: say, six feet rather than forty.)

Another key feature of Shaw's work is his impressive mastery of comic-book style inking, which he applies to various obsessions. Clearly, he is a child of the '50s and '60s, and is completely, unabashedly in love with Superman, whose image is captured, transformed, fractured and fragmented in many ways here.

Sources as disparate as William Blake and Walt Disney are blended into the Superman myth as processed by Shaw, connecting the visionary's Songs of Innocence and Experience to the Seven Dwarves and then linking it to Kryptonite.

Again, I think these elements come across best when simplified, as when Shaw groups giant cutout drawings of Superman's body parts into a wall-mounted installation, or in another installation where the black-ink area of the superhero's costume shorts turns out to be a portal into a plastic dreamworld of glowing colored crystals (shown below).

Shaw also shines in book-page-scale drawings of vortices, swirls of hair, and others of his many obsessions (architecture, the human body, American Indians, snakes, and Wagner's Ring series among them).

Shaw's sculptural forays include architectural dioramas, amusing surrealistic furniture designs (such as a nose-shaped wall sconce), and bizarre wigs, which also appear in a series of paintings made over inkjet prints, rather than discarded muslin. These paintings extend Shaw's technique of altering given imagery and introduce a self-conscious reference to art history in the form of a white rectangle cut out of the colorful image, then replaced outside it as a gray-toned expressionist swirl.

Meaning what? As with the dreams, I couldn't quite get inside Shaw's head to understand the point. But I'm grateful that it's such an active place, and that an artist of Shaw's ability makes the effort to take us there. Entertaining Doubts continues through February 2016.


In addition to Jim Shaw, MASS MoCA is currently featuring several other exhibitions. Two that are particularly worthy of note:

Eclipse is a remarkable, immersive video installation by Susannah Sayler and Edward Morris in collaboration with the ecological writer Elizabeth Kolbert that commemorates the passenger pigeon on the 100th anniversary of its extinction (image at left).

Not only a powerfully moving experience of what the incredibly numerous birds were once able to do (i.e. blot out the sky), Eclipse is a brilliant example of digital technology put to an innovative purpose as art. It also offers a beautifully produced oversized publication free to visitors. Eclipse is a must-see; it continues through Sept. 1.

Bibliotecaphilia is a group show curated by Allie Foradas with support from the Sterling and Francine Clark Art Institute that brings together six very diverse artists around the theme of books.

It includes a complex interactive installation by Jonathan Gitelson that invites visitors to spend time with a great variety of books annotated by their former owners; Dan Peterman's wonderful sculpture titled The Polymer Catalog - one ton archive, which looks like massive stacks of books but is just slices of colorful recycled plastic boards; Meg Hitchcock's painstaking and beautifully transcendent collages made of individual letters cut from holy books; and a large-scale carved wooden screen by Susan Hefuna.

Bibliotecaphilia continues through the end of 2015. 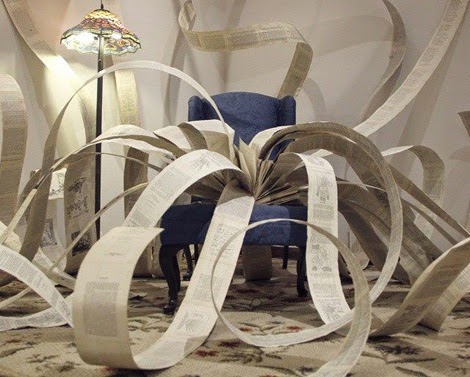