One of the best shows each year at Albany Center Gallery is the annual invitational drawn from the Mohawk Hudson Regional. It's a cool idea we don't see often enough: Gallery representatives visit the big juried show and make notes on whose work they'd like to see more of, then ACG organizes an exhibition of those select picks.

This year's MHRI at ACG includes four very diverse artists in terms of medium, style - even age - and that's a good thing. As I am one of the gallery's board members and the chair of the exhibits committee, I was involved in the selection process - so this won't be a review. Instead, I will simply recommend the show and suggest you include it in your 1st Friday plans on May 6, when the artists' reception will be held from 5 pm to 8 pm.

Their outstanding bodies of work will hang intermingled in this installation; though each pursues a distinct path to image making, the gallery's director, Tony Iadicicco, envisions the show as an integrated whole. The 2016 Mohawk Hudson Regional Invitational opens Friday, May 6, and will run through June 12. Go and enjoy!
Posted by david brickman at 10:43 AM No comments:

For a fun and very colorful experience, check out the solo retrospective of sculptor Abraham Ferraro and the annual show of Hudson Valley Seed packs at the Arts Center of the Capital Region in Troy through Sunday, April 24.

Ferraro began making mailable sculptures out of corrugated cardboard in 2008, when he sent a roughly cubical piece about the size of a lunchbox to himself. This act may or may not have been unique or groundbreaking - but it was not in the well-known tradition of "mail art," wherein the art goes inside an envelope or on a postcard, and it started something big and creative for Ferraro. 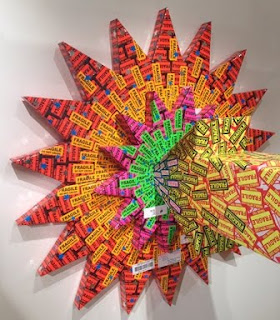 Since that start, Ferraro has built up an ever-growing body of work constructed out of geometrically shaped and increasingly colorful modules, all of which were shipped intact from the post office to galleries, where they are assembled like a whacked-out erector set. The exhibition Every Which Way, which fills the Arts Center's main gallery, adds new units and re-creates years' worth of past projects that retain their original shipping labels (including that very first one).

It's a joyous romp through Ferraro's inventively restless oeuvre - carnivalesque, yet formalist. The show also includes a couple of the artist's electrical inventions and some flatter art that has also been shipped, in which bright postal labels combine with printed images to make a picture. 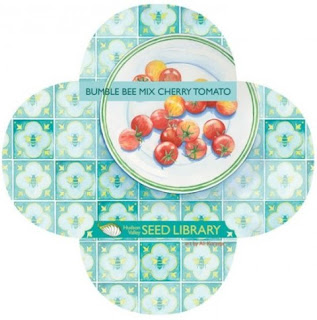 Also on view, in the Wallace + Foyer Galleries, is the Art of the Heirloom exhibition of original art that was commissioned for seed packs sold by the Hudson Valley Seed Library and makes an annual touring exhibition (co-sponsored by Capital Roots). The art is very diverse, yet consistently excellent and beautiful, while the seed packs are extraordinary examples of highly aesthetic graphic design. Seen together, they get you thinking about the ways images are transformed by context.

The show was such a pleasure, it inspired us to pick up a pack of striped cherry tomato seeds for our garden (from the Honest Weight Food Co-op), an unusual result of a Sunday afternoon art excursion.

Posted by david brickman at 7:08 PM No comments:

Several times now I've seen one or two of Susan Meyer's tiny, fantastical utopias and, every time, they fascinate. So I couldn't bear to miss her solo show Formation Proposal at the Lake George Arts Project's Courthouse Gallery, in Lake George Village, which is on view only until April 15.

Meyer uses brightly colored acrylic sheets to build complex little spaces that are populated in this show by miniature nude figures. Her sense of color and form is outstanding, and she fully exploits the way light penetrates these stacks of stripes.

Though dates were not provided for the pieces on view, they seem fresh - especially the central piece - titled Together - which is more airy than dense, with a limited palette of white, yellow and blue, and is suspended from the ceiling, so it floats as if in zero-gravity. As one gallery-goer commented during my visit, it looks like The Jetsons (a detail of it is shown at the bottom of this post). There's a playfulness here not completely opposed to that favorite 1960s cartoon - but there is also a slightly ominous dystopian feeling to the worlds Meyer creates, adding to their mystique.

A much smaller piece in the show, shaped like a rough gem, glows from the sunlight that pours in from a window right behind it (with the lake beyond). Titled Shelter Rock, it incorporates a full range of colors (as does Shaft, shown at right), but is dominated by yellow. Meyer variously uses opaque, translucent, and transparent acrylic - in Shelter Rock, the way transparent acrylic catches light and projects it from the edge is maximized.

Two other smaller pieces, titled Swimming Hole (blue) and Swimming Hole (orange), are mirror images of each other, yet appear almost completely different due to the choice of colors. Part of the fun of these simpler works is to see just how many colors (in fact, the whole rainbow) Meyer will use to make a sculpture that can still honestly be called orange.

If you can, see this show before it ends - if not, keep an eye out for Susan Meyer's work wherever it may pop up. She's definitely on to something.

Posted by david brickman at 8:50 PM No comments:

I wonder what Alma Thomas's public school art students thought when, in 1972, their teacher - retired and elderly - became the first African-American woman to have a solo exhibition at The Whitney Museum of American Art in New York City.

The idea of an artist being that important and, yet, having had to teach school all her life is far from unique, but this extreme case is certainly food for thought. Skidmore College's Tang Teaching Museum in Saratoga Springs has, in a sense, rescued this delightful painter from obscurity a second time with a sharp, spacious presentation of about two decades' worth of her work (on view through June 5) in a show simply titled Alma Thomas.

The exhibition is certainly a revelation for me - I was only a schoolkid myself when her big show happened at the Whitney and, though I am a fan of the Washington Color School that Thomas was associated with (including such notables as Kenneth Noland, Morris Louis, Gene Davis, and Sam Gilliam) I had never heard of her. Featuring a few choice examples of full-on abstract expressionism at the start (and they are very beautiful), the show quickly moves from Thomas's earlier efforts to the late phase, when her talent found its full strength in a signature style of patchy vertical or horizontal stripes.

Along the way, she tried social commentary blended with abstraction, but made a decision that perfectly sums up the nature of this exhibition, described here in a quote:
Through color, I have sought to concentrate on beauty and happiness, rather than on man's inhumanity to man.


No wonder she faded into obscurity! For what seems like half a century, the art world writ large has grimaced at the idea that a serious painter would give any thought at all to either beauty or happiness. But maybe the tables are turning at last. If so, and if this show is some evidence of a shift in that attitude, then I am relieved and grateful.

Like many abstract artists, Thomas was not avoiding subject matter per se - in fact, she still used representation in some of her work, as in her "Space" series celebrating the Apollo missions - rather, she was transforming her direct experiences into their essences via color and brushwork.

This was most true in certain paintings about flowers or flowering trees. A later section of the show features two such paintings, each about 4½ feet by 6 feet, that shimmer with the vibrant sensation of taking a tree-ful of blossoms square in the face (as in the painting shown at left). Another, slightly earlier piece celebrates four distinct types of garden flower, not by representing their forms, but by dissecting their colors and organizing them into marching ranks (example near top of post at left).

At first, these dabbed stripe paintings were fairly flat but, as time went on, Thomas mastered a layering technique that led to far greater depth and complexity, even as her palette narrowed. By the end, she was making monochrome images, often with a great deal of white, frequently mosaic-like rather than structured into rows, and the freedom did her good.

While the show is sparse, there is a denser section that groups 25 smaller works on paper into a lovely constellation of framed pieces hung above two glass-topped cases holding a group of matted or unmatted sketches. These are all on loan from the collection of The Columbia Museum in Columbia, Georgia, which was Thomas's home town, and to which her family donated the sketchbooks. It is a treat to peer into such personal studies, and the opportunity should not be missed by artists who love to sketch - it will inspire them.

Kudos to the co-curators of Alma Thomas: Ian Berry, director of the Tang, and Lauren Haynes of The Studio Museum in Harlem. Though Thomas died in 1978, here she has been brought vividly back to life at a time when we sorely need as much beauty and happiness as we can find.