You've heard Richard Butler - he's the lead singer from the Psychedelic Furs, with the wonderful bass/baritone voice featured on the hits "Love My Way" and "Pretty in Pink" - but you may never have heard of him as an artist. Currently presenting new drawings and paintings at BCB Art in Hudson in a show entitled Happinessisthespace betweensorrows, Butler amply demonstrates his skill in that department, along with a witty darkness that should come as no surprise from an original '70s-era punk rocker.

What struck me first looking at Butler's paintings is the fact that this guy is truly a painter - not some star who decided he wants to paint now, but a trained artist. Indeed, he graduated from art school in the United Kingdom, where he grew up before making it in music and settling in the United States (he now lives in Beacon). Butler loves to push the paint around, while crafting representational images (all the work in this show are portraits) that, up-close, are juicy and smooshy.

Not much of a colorist, Butler's palette hews mainly to shades of black and white with a bit of red, green, or brown mixed in, but he holds a great deal of attention to light and the way it bounces off of or activates surfaces such as the skin and moist eyes of his sitters.

The sitters appear both lifelike and severely altered, whether by heavy makeup in the form of a black cross, bandages, or even flaying. However, the work is more contemplative than grim, more theatrical than painful. He plays with words in the titles, many of which reference the Catholic holiday of Ash Wednesday, but some of which are more poetic, such as Hypochondriachost and Whateverwhereverwhenever. Again, no surprise from a successful songwriter.

Gallery owner Bruce Bergmann told me he encouraged Butler to get back into drawing, and the show includes several chalk drawings on black paper that have a pleasant floating quality, with ghostly busts emanating spindly lines of energy or light. These evoke Giacometti's wasted creatures, but also connect to the paintings and extend the Ash Wednesday theme of the smudged cross on the forehead.

Overall, it's a strong show with a fresh perspective, some nice, arty obsessiveness, and great technique. It runs through August 12. 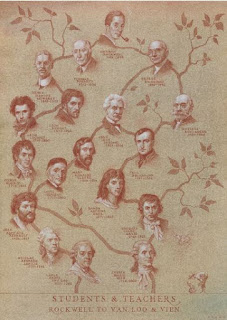