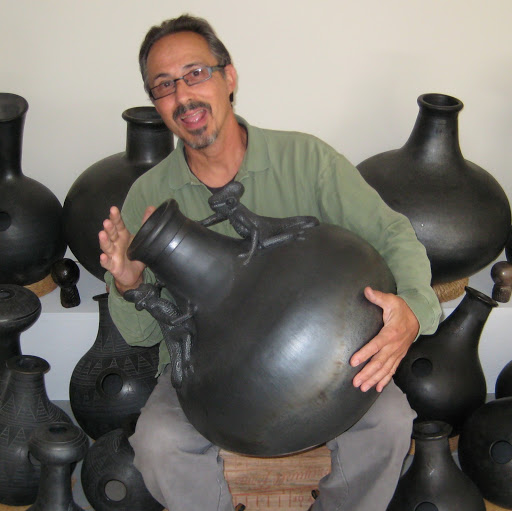 It is with great sadness that I report on the recent death of a dear friend, the world-class ceramic artist and Udu drum maker Frank Giorgini, of Freehold, NY. He was 75 years old and had been undergoing treatment for cancer.

Frank and I first met in the mid-1980s when we both were teaching classes at the Harmanus Bleecker Center in Albany under the auspices of the Albany Institute of History & Art and the inimitable guidance of Monica Miller (also a wonderful artist). One of my favorite memories of that time was when we shared a two-person show at the Bleecker Center that featured Frank’s Udu drums and my photographs, all of it dusky and formal, a lovely pairing of sculpture and black-and-white pictures.

Frank was probably best known for his handmade and commercially manufactured clay pot drums, which are treasured by percussionists all over the world for their unique, earthy sounds and robust shapes, some exquisite examples of which are held in the permanent collection of musical instruments at the Metropolitan Museum of Art in New York City. Frank used to proudly state that he was the only living person whose product was in that collection, though I suppose other living artists’ instruments may have been added after the fact. If not, then there are now none who can make that claim.

But Frank had equal impact in many other aspects of ceramic production, both in the commercial realm as a tile maker and in the fine art realm – though, in his case, the line between the two was fuzzy at best. Many will recognize his tile and mosaic installation in the Whitehall Street station of the Brooklyn BMT subway line, which was commissioned and installed in 2000. Entitled Passages, it traces the history of Manhattan backward in time using numerous airborne gulls as a unifying element (you can see many pictures of it here).

Nature and animals constantly featured in Frank’s personal work. Whether exploring the personas of humble blackbirds in his shimmering raku-fired tiles or adorning a decorative Udu with undulating lizards, he understood and celebrated these creatures as equals. As humans, we were fortunate that he also treated us with the same respect.

Most artists, no matter how talented, need something more in order to be successful – whether it’s a lucky break, an enthusiastic patron, or a trust fund. In Frank’s case, it was his congenial personality. Everyone liked Frank, and I can imagine no one who would have turned down an opportunity to work with him or support his vision.

One way he shared that vision was through teaching. He published books and instructional videos on tile making, and worked as an adjunct professor at Parsons design school in New York. Probably most important to Frank were the summer workshops he held at his Catskills home and studio for people of all ages and abilities who wanted to spend a little time in the country and learn how to build and fire an Udu drum.

Those two-weekend-long instructional experiences took place around Frank’s birthday, and always culminated in a grand potluck supper followed by a Bacchanalian bonfire, which naturally would be ringed by a large, happy throng of Udu-playing revelers. Though I never made an Udu drum, I stoked that fire nearly every year for decades, and danced around it with the best of them. Those Udu Fests will surely be among the most vivid – if slightly blurred – memories for many of Frank’s friends and fans.

Frank also was the proprietor, along with his partner, the great chef Ana Sporer, of Ruby’s Hotel, a delightful garden-to-table restaurant in Freehold that is expected to return to serving dinners after a period of mourning. As bartender and host at Ruby’s, Frank welcomed guests with his consistent good humor and, after dinner, he often shared a taste of his homemade limoncello, created using a recipe from his Italian ancestors, and as strong as it was sweet.

Above the restaurant was a gallery where, for many years, Frank mounted excellent shows of the best regional artists. The gallery was named in memory of another Frank, a close friend of the restaurant’s family and a supremely talented artist himself, who died way too young just before he was to have been the exhibition space’s inaugural director. I hope that the Broderick Gallery, too, will resume activities after a time, in loving memory of both Franks and their dedication to the joy of making and experiencing great art.

That and so much more remains as the legacy of one very fine person who also happened to be a brilliant artist, and a beloved friend to many.

The world was a better place with Frank Giorgini in it. May he rest in peace.

Note: If you’d like to get a taste of the amazing sound of the Udu drum, check out this extraordinary improvisation by Jacob Cole, a former workshop participant who posted it in Frank’s memory.