Here it is again - Oscar time. As I often do, I'm taking the opportunity to comment on some of the best films from 2017; however, as will become apparent in a few paragraphs, I feel I have reason to avoid prognosticating on what films or actors may win this year's statuettes.

First, a disclaimer: I have yet to see four of the nine Best Picture nominees. Those include at least three I plan to see when I can (The Shape of Water, Darkest Hour, and Call Me By Your Name), all of which come highly recommended. Would I pick one of those films as the best of the year? Possibly, though I don't expect that. For sure, though, I can't speculate on how the Academy will vote on Best Picture without seeing a bigger sample. 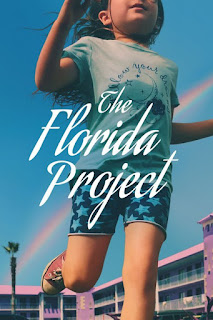 What I can say is that the Academy has definitely left out one of the year's best films due to politics, and that is Wind River, which unfortunately had a minor connection to the accused rapist Harvey Weinstein. Ironically, Wind River sends potent and well-crafted messages in support of women's rights, so to snub it even after the film's director and Native American producers excised the Weinstein name from their product is just plain wrongheaded.

Another film that is inexplicably absent from the Best Picture nominations is The Florida Project, which got one well-earned nod for Supporting Actor for the always-great Willem Dafoe - and that's it. Both Wind River and The Florida Project are in my Top Five, while the Best Picture nominated Lady Bird, The Post, and Three Billboards Outside Ebbing, Missouri are not - so, screw the Academy. That said, those are all in my second five, so maybe I should be a little more tolerant. Oh, well, call me cranky.

By the way, I'd say 2017 was a good year for movies but not a great one - none of these picks garnered my highest rating, though half of them came close. Why not? It's hard to pinpoint exactly, but when I recall a five-star movie - say Brokeback Mountain, or Spotlight - I find these offerings were slightly lacking in comparison. 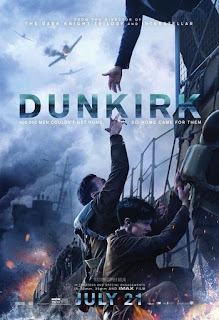 The rest: I rated the following six films about equally, and so I present them in no particular order. A few got a lot of attention, whether fully deserved or not; some were perhaps undeservedly overlooked. 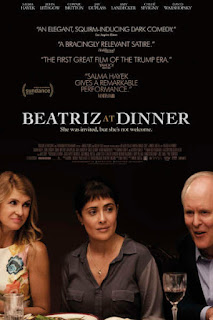 Beatriz at Dinner stars Salma Hayek as a servile massage therapist who, during a very awkward dinner at a very rich client's house, suddenly finds her mojo. Some crackling dialogue follows, as do a few bizarre scenes within a set limited to the house and its environs.

The Post doesn't need much introduction. As a former newsroom staffer, I relished every moment of ink-stained nostalgia the film dished up, no matter how stagy. But it's Spielberg, and he always panders. Saved by Meryl Streep's masterful performance and, of course, a ripping great yarn.

Lady Bird is a small, character-driven drama featuring two terrific actresses who spar entertainingly as only a mother and teenage daughter can. Saoirse Ronan and Laurie Metcalf earned their Oscar nominations, and first-time director Greta Gerwig does herself proud. But, frankly, it's a touch forgettable. 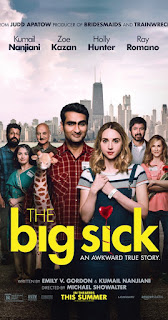 The Big Sick also represents a directorial debut, and it is fresh and funny, even if underneath the bizarre stuff it is still a sticky romance. The young married couple whose life it's based on got a Best Original Screenplay nod for this one, and they are worthy of it.

Three Billboards Outside Ebbing, Missouri has to be my pick for most overrated movie of the year (possibly to be unseated by The Shape of Water - we'll see), even though it is actually quite good. In fact, it's my kind of movie, so I'm not biased against it - but I'm a little perplexed that it's winning so much attention, especially because that doesn't usually happen to my kind of movie. Could be I'm just wrong on this one!

Patti Cake$ is perhaps this year's most overlooked film. It tells the story of a trio of misfits who try to break into the local New Jersey rap scene, and actually convincingly pull it off - almost. A few touching stories are intertwined, with a killer soundtrack of originals and plenty of colorful imagery to go with them. Check it out, I promise you will enjoy.

In Brief: Barbara Takenaga at WCMA

We took a drive over the mountain pass to see Barbara Takenaga's show of more than 60 paintings at Williams College Museum of Art, and it was well worth it.

The show is dazzling, beautifully installed in several rooms of different sizes, and every corner you turn gives you another "wow" moment.

If you go, be sure to find a way to crouch down and view some of these beauties from a low angle - that way, you will better be able to experience their metallic iridescence under the ceiling-mounted lights.

It ends Jan. 28 - so catch it if you can. But, if you can't, there is some consolation in the form of a lovely hardcover catalog that includes most (or all) of the work, and it's reasonably priced. I liked the work so much, I purchased the book to show Mom.

Posted by david brickman at 11:03 PM No comments:

The Patroons are back!

Good-sport spouse and I attended the home opener of the new Albany Patroons professional basketball team on Saturday, and we had a great time. Like the glorious Patroons of old (circa 1980s), this team plays in the Washington Avenue Armory, a well-lit venue with character, history, and a quite good-looking hardwood court.

While technical difficulties marred the franchise's North American Premier Basketball League debut (i.e. no scoreboard or shot clock, and a truly insipid buzzer), it was still a pretty successful launch, with an announced crowd of 1,507 and a solid win for the home team. One of the beauties of the Armory, and the source of its legendary intense atmosphere of past Patroons success, is that it's small enough so even 1,500 people can warm it on a frigid night, and 3 or 4 thousand will positively rock the place. I don't think even the most optimistic boosters expect such numbers any time soon (or ever), but I do think the quality of the experience has the potential to draw healthy crowds if management can work out the kinks.

Meanwhile, the legacy is alive in the form of Head Coach Derrick Rowland (aka Dr. D), a stalwart team member in the Pats' heyday, and one of the top players in the history of the old Continental Basketball Association that fostered the original franchise. Rowland leads a crew of athletes with a range of professional and college playing experience who delivered a very entertaining game, replete with speedy play, smooth long-range buckets, and rim-rattling dunks.

After a raggedy first period in which the Rochester RazorSharks seemed to have the upper hand, especially on defense, the Pats gathered themselves and, by the start of the third period, had gained a lead they did not relinquish. The play was fast and physical, the officiating was iffy (though spiffy, uniform-wise), and the player rotation allowed every starter and bench-warmer plenty of opportunity to make a strong first impression on expectant fans.

I attended just about every home game played by the champion Patroons of old, and I'm not about to say that this roster could compete with the likes of Tony Campbell or Mario Elie (to name two of many former Pats who went on to have significant NBA careers), but I was not at all disappointed by what I saw on Saturday. Among the standouts, ex-Los Angeles Laker Smush Parker ably led from the point, rocketing some beautiful passes along the way; rangy forward Torren Jones earned my respect, and a double-double, with great play in the paint; and local hero Lloyd (Pooh) Johnson buried several threes to help ice the game. And that's without currently sidelined Siena product and 2012 NBA D-League Rookie of the Year Edwin Ubiles, who should prove to be among the team's best players when his back feels better, and former Patroon Jamario Moon, a crowd-pleaser with scads of NBA and international hoops cred, whose presence will help to sell more seats if they can convince him to sign on.

So, I'll be back, with high expectations, and the hope that this thing gets some traction and regains a little bit of the old glory - or at least brings back the crazy fun of a filled-to-the-rafters Armory vibrating in the Albany night.

Posted by david brickman at 9:58 PM No comments: