March to March at the National Bottle Museum 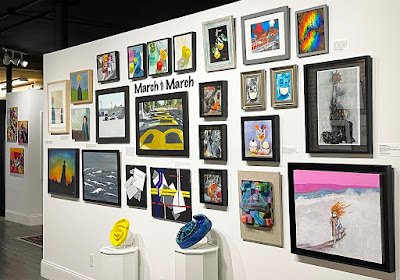 An exhibition featuring the work of 42 regional artists has been mounted in the JRM Artists' Space at the National Bottle Museum in Ballston Spa and will hang there through May 1 has been extended through May 29.

The view above shows a fraction of the entire show, which is entitled March to March and its effect on Art and Artists, and was created through an open call by organizer Fred Neudoerffer.

The detail below includes my own contribution to the show (it's the larger one in the middle).

The current five-person show at The College of Saint Rose's Esther Massry Gallery in Albany is a lively, cohesive example of curatorial ingenuity.
While each artist in the show is highly skilled and clearly worthy of attention on her own, in this setting the five women's works take on greater complexities of meaning through their interrelationships, losing nothing of individual strength in the bargain. The theme of the show, which is entitled Earthly doesn't shout - in fact, it's so subtle you could miss it altogether - but it succeeds in holding the collection together organically.
I don't have a favorite in this show, though I'd say the layered, lyrical installation of nine ink-on-Mylar assemblages by Julie Evans is its focal point. Dated 2011-2014, these mixed-media organic abstractions retain their freshness, enhanced by the playful nature of their presentation here, in which an unframed series of swooping and morphing forms adhered directly to the wall serves as a lattice to connect the more stolid framed and mounted works.
Also installed directly on the walls are three of four sculptures by Odessa Straub (the fourth being a freestanding floor piece). Straub has a Surrealist bent, with a Dadaist sense of humor and surprise. How else could one so elegantly combine such inapt objects as a live underwater plant and a leather speed bag (the type used by boxers to train), among other witticisms? There's also an undercurrent of mad-scientist menace to Straub's combines, while they are still sleek, playful, and colorfully pleasing.
Meg Lipke also works in three dimensions, but her two pieces in the show play off the wall as pumped-up frames that become their own pictures. Lipke's more modest piece (which is untitled) has multiple openings in a pillow-like structure of stuffed fabric, with highly vivid coloration activating its upbeat claim on a small square of wall space. Her much larger Garden Gates II, also made of painted stuffed fabric, is less bright and slightly droopy - but, at nearly 9 feet tall, its presence is clearly stated.
Yet another sculptor, Tamara Zahaykevich, is represented by a group of five pedestal-mounted forms that hold together quite nicely as a group, though they span well over a decade of production from 2007 to 2021. Like Evans' work, these lean toward abstract biomorphism, with a limited color palette and carefully worked surfaces.
Variety comes as Zahaykevich works these pieces' surfaces in many different ways, from meticulously detailed to roughly scrubbed. One piece, entitled Robert Wisdom is more architectural, as were some of Zahaykevich's pieces that were included in the excellent Cut and Color show that recently ended at the Albany Airport Gallery.
The overall installation of earthly is somewhat sparse, which allows for one side of the gallery to remain unlit for viewing the wall-projected video contributed by Laleh Khorramian. Entitled I Without End, the nearly 7-minute-long time-lapse animation is a curious vision of sad romance, played out by carefully cut orange peels in a miniature chateau-like setting.
Khorramian's soundtrack ranges from lightly industrial to orchestral, including atmospheric voices at times, and it sits comfortably in the gallery space, not loud, almost soothing. Her imagery is at turns abstract and representational, but its real magic comes in the unpredictable movements of drying organic material over time, and it is surprisingly affecting. I don't have a lot of patience for longer-running video clips in a gallery setting, but this film held my attention for two complete viewings.
Credit is due the two curators of Earthly, Saint Rose Associate Professor of Art Susan Meyer and Massry Gallery Manager Erin Sickler, who've assembled this grouping with sharp eyes and clear minds, allowing the whole to honor each of its parts. The show will remain on view through March 17.
Posted by david brickman at 5:48 PM 1 comment: