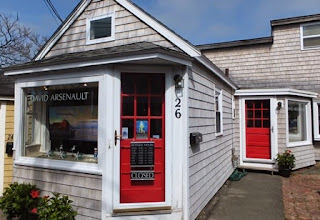 Click! and Making Their Mark at The Hyde Collection

In a time of transition for The Hyde Collection in Glens Falls, two small shows drawn from the museum's permanent collection are on display. The more significant of the two was curated by outgoing Director Charles Allan Guerin, who will be replaced in July by former Hyde curator Erin Coe. Titled Click!: Selections from the George Stephanopoulos Collection, the Hoopes Gallery display features 31 photographs chosen from among more than 120 that were recently donated to the Hyde by the political and media pundit. It hangs through May 31.

Having heard the news about this important addition to the collection, I was eager to have a look - and I'll admit I was a bit disappointed not to be seeing the whole trove. Guerin culled the larger group down to the work of 12 artists (pointedly describing them as such in the show's written material), with a nice range of styles, methods and time frame, creating a mini-lesson in the history of the medium of photography. A few of those included are widely regarded as significant, and none of the work is second rate, but some is rather little known, a treat for a crusty old curmudgeon like me who thinks he has already seen all the worthwhile pictures of the 20th century.

Among the household names are Larry Fink, represented here by four prints from his 1980s series on working-class people at home in Pennsylvania; Joel Meyerowitz, with four small color gems from his Bay and Sky series of Cape Cod pictures; and Henri Cartier-Bresson, whose two prints from the 1960s are more like news photographs than most of his best art. Surprises include an Italian photo-club member from Milan named Mario Finocchiaro (example shown at right); Jeannette Klute (the only woman in the show), who had a career at Eastman Kodak developing the dye-transfer printing process (image shown at the top of this post); and William E. Dassonville, a recently rediscovered practitioner from the early days of West Coast photography.

The majority of the pictures have social or political overtones, not surprising considering their source. Some of these are wonderfully witty, incisive, or even mysterious, such as Leon Levenstein's two undated pictures of people seen from behind, and Leonard Freed's four documents from diverse locales, including Sicily (the shot features a large tuna) and London (depicting British women of Indian descent). There are two images of Dwight D. Eisenhower, one by Cartier-Bresson (who was French), the other by the Canadian portraitist Yousuf Karsh.

One of my favorites in this selection is a small, very Modernist print made from a 1912 Karl Struss negative (shown at left), which stands in stark contrast to a 1910 Struss image that is pure Pictorialism - what a difference a couple of years made! Also outstanding are two 8-inch-by-20-inch black-and-white contact prints by Michael A. Smith; one is of a lifeless corporate building in Princeton, N.J., the other of a sunny vineyard in Tuscany.

Only 13 works of art are included in the Rotunda exhibition titled Making Their Mark, but as the title suggest, they have an impact. Again drawn from the museum's permanent collection, these works on paper are by names major, minor, and in-between. Examples of the known include Wassily Kandinsky, Dorothy Dehner, and Robert Motherwell. Also included are two fine drawings by local artists Sandra Miller and Dorothy Englander, which were purchased by the Hyde back in the days of the Adirondack Regional exhibitions (full disclosure: Englander and I share a studio).

All the work in this show is abstract or nearly so. One curiosity is a very graphic representation of figures (so stylized they look more like mechanical drawing tools than people) titled "The Specious Solemnity of Gossip," made by Attilio Salemme in 1943. There's also a vibrantly colorful composition made by Ludwig Stein in 1985 titled "Time Trap" - somewhat ominous if you note his death date is 2015.

Perhaps the strongest piece in the show is a drawing by Gregory Amenoff (pictured below) - I would say that work alone is worth the trip. Making Their Mark will hang through June 21. The Hyde is also hosting the 24th Annual Regional Juried High School Exhibition through May 31 in the Wood Gallery.