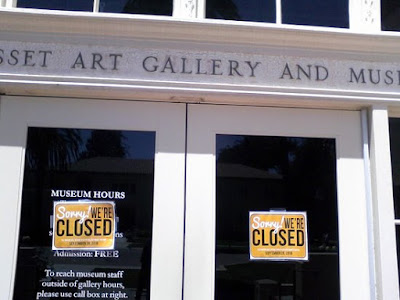 It's April 2020, and the top subject on just about everyone's mind is how to reopen the U.S. economy while maintaining a safe environment in relation to the novel coronavirus.

Governor Andrew Cuomo has set May 15 as the date to begin this process in New York state, with many limits sure to remain in place, and careful decisions to be made on which businesses or services should restart.

My big question is: Where will art museums and galleries fit into this plan?

I think they should be among the first businesses to reopen, for the following reasons:

We desperately need the lift that art provides, and we can't afford to lose these vital community resources for all time. With these thoughts in mind, I propose that Gov. Cuomo seriously consider adding museums and galleries to the list of businesses that may reopen their doors when the next phase of New York on Pause is implemented.

UPDATE, 5/9/20: The New York Times reported on May 8 that upstate museums could be allowed to open sooner than those downstate, in the third phase of re-openings (along with restaurants, but still behind some retail) rather than the fourth (which includes entertainment). You can read it here.
Posted by david brickman at 12:11 PM 2 comments:

Don't you just love a good coincidence? I know I do.

Though my daily routine is only lightly influenced by the current stay-at-home normality (as I stopped working a bit less than a year ago), it has still afforded me additional time to do those things I've been meaning to do but managed to avoid by going out to more pleasant experiences, like concerts, movies, and dinners, that are now impossible.

So I'm sorting through old stuff, a long-overdue project. I'm not a hoarder (really!), but I do get lazy and take too long to complete things I've started. That's why I have a terrible backlog of unread newspapers and magazines in my room, but it's also why they don't just go wholesale into the recycling bin - I want to go through them first. I started and I mean to finish.

Over the past year, the occasional fit of constructive reviewing, sorting, and tossing of these archives always produces a gem or two - and so I am encouraged in my folly. This effect was more than abundantly clear a few days ago when I randomly picked up and read (well, cherry-picked) an entire Sunday New York Times from September, 2012.

In it, there was a spookily prescient op-ed by David Quammen, whose book Spillover: Animal Infections and the Next Human Pandemic was soon to be published. There he asked the question we all now know the answer to: What will cause the next global pandemic?

His answer included the following:
Scientists who study this subject — virologists, molecular geneticists, epidemiologists, disease ecologists — stress its complexity but tend to agree on a few points.

Yes, there probably will be a Next Big One, they say. It will most likely be caused by a virus, not by a bacterium or some other kind of bug. More specifically, we should expect an RNA virus (specifically, one that bears its genome as a single molecular strand), as distinct from a DNA virus (carrying its info on the reliable double helix, less prone to mutation, therefore less variable and adaptable). Finally, this RNA virus will almost certainly be zoonotic — a pathogen that emerges from some nonhuman animal to infect, and spread among, human beings.

In other words, the now universally loathed and feared COVID-19.

Quammen knew what he was talking about, but it's not like he was some sort of prophet. Indeed, as a good reporter, he cites his sources: Scientists. They knew, and we were supposed to be prepared. Oy.

Even more coincidentally, that same 2012 edition of The Times quotes Walt Whitman's famous 1855 poem Song of Myself, in which he stated "I contain multitudes." This phrase became the title of a 2016 book by the science writer Ed Yong, which beautifully and clearly explains just how ubiquitous and powerful microbes are. Those of you who know me well may remember my constant raving a couple of years ago that Yong's book had changed my worldview. Through it, I learned that the microbes have always been in charge of things on Earth, that they always will be in charge, and that we are merely their oh-so-temporary guests.

At this point, I trust that every well-informed person understands this truth, thanks to the novel coronavirus epidemic. The microbe is in control - we are completely at its mercy, now and for the foreseeable future.

That is our reality and it can't be denied (though some continue to try).

A seven-and-a-half-year-old copy of The New York Times has no consciousness or intention (neither does a virus), but it brought those qualities to life in me as I sat in my favorite chair, just reading and stirring up a little dust.

This life is temporary. We have very little control over what will happen to us from one day to the next. So, let's be smart and try to make the best of it. Be kind, be generous, be respectful. Love one another. Support the things you care about. Now is the time.