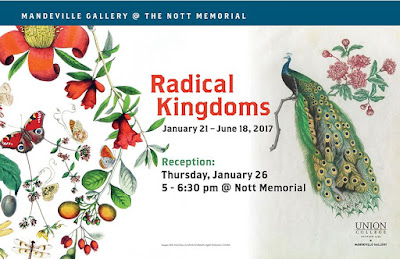 Extensive open hours may not be the best reason to like a gallery, but it's a factor in my positive assessment of Union College's Mandeville Gallery in the Nott Memorial, where a show intriguingly titled Radical Kingdoms is on view through June 18. It's great that you can go see it any day from 10 am to 6 pm.

But a more substantive reason to like the Mandeville is its eminently able leader, Julie Lohnes, who deftly organized the show around a theme of botanical and biological illustration by contemporary and historical artists, drawing connections from the past and linking traditional scientific illustration to more expressive modern iterations of the style.

A visit to the Nott is always a step into the past, as it is a unique structure that exemplifies the state-of-the-art design and engineering of 100 years ago, and that makes this show a particularly comfortable fit for the unique space that the gallery occupies on a circular, second-story balcony. Lohnes has chosen works by five contemporary artists, augmented by examples of work by ten historical illustrators drawn from Union College's archives that range from an anonymous 19th-century printmaker to the uber-famous John James Audubon.

Several gorgeous 2001 re-prints of Audubon's work are the stars of the historical group - but they can't outshine the best of this selection of current work by George Boorujy, Juan Fontanive, Portia Munson, Amy Ross, and Anne Siems.

Boorujy presents painstakingly detailed, large-scale images of plants and animals that appear both highly realistic and fantastical. Artist statements are peppered through the installation, and his are among the more engaging, as he describes his interest in nearby wildlife that may surprise the average New York City urban dweller, calling himself a "large social primate" living in "an enormous colony."

Fontanive is represented by a single, very small work, which is an electrified metal contraption that continuously flips through an accordion book of appropriated bird illustrations (see image above at right). The sound and the movement of this work of art unobtrusively capture and hold the viewer's attention. It's an excellent example of the post-modern approach to creating a new kind of art experience from a familiar kind of image.

Amy Ross is also a filcher of old illustrations who uses her thievery to produce a fresh result. In this case, the old images are reconfigured into delicate hybrids by means of collage, or reimagined into masterful watercolor originals. Her six pieces on view are perhaps the most seductive work in the show.

Complex combinations are also at the heart of Portia Munson's deliciously colorful scanner photographs (one is shown above at left), in which she builds arrangements of flowers and dead birds into beautiful inkjet-printed mandalas. Munson hails from Catskill, and her work has been seen in recent years at the Albany International Airport, MASS MoCA, and other local venues - and it's always a pleasure to see more of it.

Anne Siems is a German-born artist now based in Seattle, whose work retains a Grimm-ness reminiscent of her homeland. In her three paintings on view here, she combines pure painterly concerns with storytelling imagery that is just a little bit unsettling. Her small piece titled Little Nest is subtle and particularly appealing, as it places an egg-filled bluebird's nest on a white ground, with brown rivulets of paint, rather than branches, holding it aloft.

Overall, this show is a breath of fresh air. You'll be glad if you make a point of checking it out.