One thing about runners is that we are persistent. While a lot of people let the pandemic keep them indoors and out of shape, we just kept on running, even if the usual races that keep us motivated were mostly canceled (or virtualized).

This year's running season was an improvement over last year's, in that we got incredibly effective vaccines (thank you, scientists!) which allowed many of the regular road races in the Capital Region to come back live.

My personal goals stayed the same, which is to just keep at it and try to maintain the pace I had established in recent years for my usual 5k distance. But that's getting harder with age. In fact, I now think, in my 64th year, that I've already peaked. Which is OK - and that's the meaning at the heart of today's story.

Now, that doesn't mean I couldn't improve my times - barring injury, it would definitely be possible, as I believe any trainer would attest. However, it would take more and more time and effort at this age, which to me is simply not worth it. After all, the benefit - and purpose - of all this is to be healthy, not to be faster than someone else. And it's well documented that the speed you run has almost nothing at all to do with the health benefits you gain from running.

So, this year, as before, I continued to run approximately every other day, for about two to five miles each time, totaling around 10 to 12 miles per week. I participated in seven races, including a couple of virtuals, and one 10k race, the rest being 5ks. I do have one more 5k race to go, a tiny one in Alplaus, where my in-laws live - so I'll have a nice little cheering section, and one last chance to set a PR (that's runner slang for personal record) for 2021 before the cold weather sends me back to the indoor track.

My best 5k time so far this year is 26:20 - not too bad, and only a bit behind last year's best time of 26:11. (Interesting fact: Statistically, a runner loses 7 seconds per year per 5k, which puts me right on course in my decline.) In the races I ran this year, I placed second in my age group twice, which is similar to my prior results after age 60, but still somewhat meaningless, as it really depends mostly on just who shows up.

Case in point: For this year's JCC Dunkin' Run (my "home" race, as the course is right by my house), I decided to try the 10k distance, even though I was the defending champion in my age group at the 5k distance from the last time they had the race in 2019. I'd run 10k a few times in training and figured I could break 58 minutes or, if having a really good day, maybe even break 57.

In the end, I gave it my all (as you can see in the finish-line snap at the top of this post) and clocked in at 57:20 - finishing last out of seven men in my age group. It's not like it was even close - four of those guys were a full 10 minutes ahead of me - which is like 25 runs in baseball - and I honestly can't begin to understand how they're physically able to do it. But, for me, it was still a PR for the distance, and a successful effort.

Also, underlining the fun that comes from joining the runners' community in these events, the person who finished directly in front of me was the women's 15k winner and directly behind me was the second-place finisher - you heard right, they ran 50% farther than I did in about the same time. Two weeks later that same pair - 30-year-old Caitie Meyer and her friendly 37-year-old rival Karen Bertasso Hughes - finished 4th and 6th in the Freihofer's Run for Women. Nice company to be with on a weekend morning!

In the end, I am most grateful simply to be able to run as a senior, and to be in good health at this perilous time in our history. I may never again break 26 minutes for a 5k run, but I hope to be able to run, however slowly, for many years to come.

Ruminations on the Regional 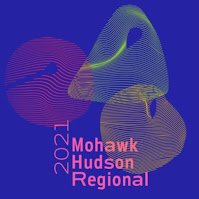 The 2021 Mohawk Hudson Regional is a bit of a head-scratcher, not because it fails to represent the region’s range of outstanding artists (which is the show’s basic mission since its inception 85 years ago), but because it does so in a very cumbersome manner.

I submitted to the show this year, and so I can’t in good conscience write the critical review I’d like to, but it’s too important an event to merely pass over, so I’ll try to take an objective approach with this brief report.

First, some history. Over the past dozen years or so, the Annual Exhibition by Artists of the Mohawk Hudson Region (its formal name) has been rotating among three sponsoring organizations: The Albany Institute of History & Art (its original organizer), The Hyde Collection in Glens Falls, and the University at Albany Art Museum. A prior host, the Schenectady Museum, changed its mission from art to science some years back, leaving the Regional to wander a bit every third year, until the Hyde stepped up to fill the role of a third regular host. During that time, the show landed at least once at the Albany International Airport Gallery, a fact I mention because, this year, it’s there again (in part).

With the Institute, the Hyde, and the University as regular hosts, the Regional was doing fine, until COVID-19 hit. This disrupted the University Art Museum’s schedule to the point that it had to cancel its 2021 position in the Regional’s regular rotation, after which it was decided that the show would be managed by Albany Center Gallery (ACG). Being physically too small and insufficiently staffed to host the show alone, ACG then recruited additional space and support for the venture from The Sage Colleges’ OpalkaGallery and the Airport Gallery.

This solution, though a compromise, offered additional perks. Now, rather than having just one big show with one juror (the longstanding tradition), there would be three shows, each with its own juror, with all of the art still being drawn from a single pool of entries. Each venue selected a juror: Hudson gallerist Pamela Salisbury for the Opalka, local artist Alisa Sikelianos-Carter for ACG, and Seattle-area artist and arts administrator Tommy Gregory for the Airport – and the stage was set for a unique event.

The resulting tripartite exhibition features 143 works by a record 96 artists (14 of whom were also in the 2020 Regional). Unsurprisingly, this horde includes a number of familiar names, as well as a goodly smattering of new or lesser-known artists, the diversity of which the organizers had said was a goal for this year’s exhibition. While I didn’t love the new format, as an artist I was excited to think that I had three chances to be chosen (alas, that didn’t happen); an additional decision by the organizers to reduce the entry fee to just $10 (from about $40 in past years) made it even more appealing.

Now, as an audience member, I have a couple of problems with the arrangement. First, in order to take in the entire selection as one show (like in all prior years), it’s necessary to find time and the means to go to all three venues, not to mention somehow keeping in mind what you’ve seen in each to meld it all together. Second, two of the venues have set rather short runs for their parts of the show (Sept. 7-Oct.9 at Opalka and Sept. 10-Oct. 9 at ACG), compared to prior years in which the Regional would typically run for at least two months (which the Airport segment does this year), putting further pressure on the viewer’s resources.

Worse yet, several of the included artists are featured in two locations, and one is in all three, making it even more difficult to absorb and understand their contributions as a whole. (I think all artists would agree that they’d rather not have their work scattered like this.) Even within the venues there are distribution problems. Nearly half the total artists (44 of them) have their works crammed into the confines of ACG, making for a salon-style installation where items are stacked and grouped, and where some individual artists’ have multiple included pieces separated from each other within the room.

While I find all that unfortunate, there’s a lot of energy amid the clutter at ACG, and many intriguing works to be found in the mix there.

In contrast to ACG, the Opalka’s more generous space seems rather sparsely filled. Salisbury selected mostly abstract art, a form I dearly love, but this segment of the show somehow comes off strangely flat. I think this is a consequence of the exhibition being divided – if these mostly worthy works were intermingled in a larger museum space with the other jurors’ choices, it would have created a much more stimulating conversation.

That more appropriate balance seems to have been struck at the Airport – possibly because the juror there is more experienced in putting together large exhibitions for mass consumption in his role as the curator for the Port of Seattle. If only the entire show had been mounted there as it once was, this might have been another great Regional. But that would have been impossible, as the formerly vast space of the airport's third-floor gallery was recently reduced to a much smaller one.

On the plus side, that space is open from 8 am to 10 pm daily, and that segment of the show runs through Nov. 8, so there’s no excuse for missing it.

Posted by david brickman at 8:53 PM No comments: