Each year in the Capital Region two big shows provide an opportunity for local artists to expose their latest work and for art fans to see a broad range of what the regional scene has to offer. Those two shows are the Mohawk-Hudson Regional, which rotates venues, and The Fence Show, hosted annually by the Arts Center of the Capital Region (ACCR) in Troy. Each show serves these purposes in contrasting ways.

The current edition of Fence Select (a curated selection of 62 pieces pulled from the 400+ works submitted to the all-inclusive, salon-style Fence Show) has a quite a few of the same artists you might find in a typical Regional - but that's where the similarity begins to fade. Most notably, Fence lacks gravitas - it's casual. The artworks are arrayed in straight lines, but with little apparent relationship among them (see example in view shown above). It's possible that this quirky arrangement was done in homage to the Fence Show's origins - it began several decades ago with the artworks being hung from the spikes of an iron fence that surrounds Troy's Washington Park, where the ACCR was located at the time.

Also quirky: Several of the included artists (juried by Art Omi Curator Nicole Hayes) had two pieces chosen, but none of those pairs are hung together. Meanwhile, somewhat counter-intuitively, all but two of the prizes went to artists who had just one piece chosen (the exceptions being Runner-Up Jeff Wigman and Honorable Mention Catherine Austin).

On the plus side, those prizes were numerous and rich - a total of about $3,000 was awarded to 11 recipients, including a Student Best in Show and a Student Runner-Up, who received $100 each. That kind of encouragement to young (or, for that matter, established) artists is invaluable.

Then there's the numbering system. Rather than re-number the works after re-hanging them from the Salon installation, the ACCR has retained each piece's original submission number, making for a whacked-out game of seek and find when attempting to locate works by referring to the numerically ordered checklist. Additionally, at the time of my visit, the checklist was missing five of the selected pieces altogether, so I couldn't even identify those artists or their works' titles (hopefully, that's been rectified).

As is usual with a juried show, there are a few odd choices here, including several that are - forgive me - plain awful or, at best, pedestrian. It seems Hayes has curious taste. I'll leave it for you to decide which may be the weaker players, but let's just agree to accept the show as a bit underwhelming overall and move on to the highlights.

Among my favorite pieces in this selection are non-prizewinners by artists I've known for a long time. Lori Lawrence, emerging from a prolonged hiatus, has two particularly strong paintings of natural scenes with gloriously unnatural coloration. Also glorying in unbridled color sense is a large painting on paper by Wendy Williams that, wisely, was given pride of place at the start of the exhibition. I also discovered a few new names worth keeping an eye out for, including Janet Barnett, whose delicate, pedestal-scale wood sculpture entitled Autumn Wind captures movement remarkably well; and Aindrea Richard, whose mystically complex and adroitly painted untitled gouache received an Honorable Mention from the juror.

Other prizewinners include Jamie Rodriguez (Best in Show), whose amusingly titled combination of painting and sculpture stretches boundaries of medium, expression, and - possibly - decorum (see image at bottom of this post); Catherine Austin, who makes drawings from old Polaroids (I think); and Mary LaFleur, who received a staff award for her expressive ceramic horse (shown at left).

The show has a fairly small selection of photographs (most of which, regrettably, are forgettable) but three stood out to me: Chris Demarco's study of a kudzu infestation; Theresa Swidorski's negative image of a forest; and Robert Coppola's color picture of a tiny house in Maine. 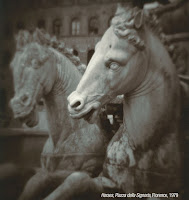 Fence Select will remain on view through July 7. Also on view in the ACCR's Foyer Gallery is a crowd-pleasing collection of works on paper by Mary Sherwood entitled Drawing on Experience, which will remain there through Sept 6. An artists' reception for both exhibitions will be held Friday, June 28, from 6-8 p.m as part of the monthly Troy Night Out events.

Also of interest in Troy is a retrospective exhibition of photographs by Eric Lindbloom, extended through June 30 at the PhotoCenter (example at right, above). Fans of traditional black-and-white photography will be thrilled by the craftsmanship and ethereal quality of Lindbloom's masterful work.

Posted by david brickman at 9:10 AM 2 comments: