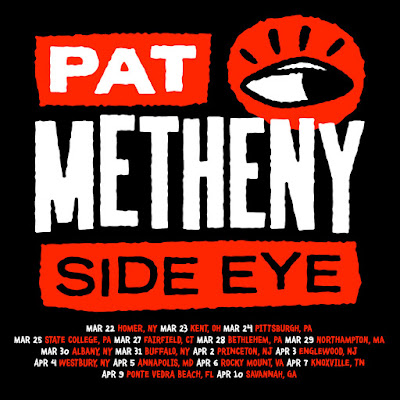 I've never written a music review - and I'm not about to start now - but I have to shout this out:
The concert by Pat Metheny's Side Eye that I attended last night at The Egg in Albany was so good that I promise you no peace if you miss the chance to see them wherever and whenever you can.

Joined by James Francies (keyboard, piano) and Nate Smith (drums), Metheny ripped the doors off the perceptions of a nearly sold-out crowd, channeling everybody from Clapton to Gilmour to Hendrix, while his colleagues nimbly and forcefully kept pace.

Of course he also did a whole lot of amazing Metheny while he was at it.

Brilliant, transcendent, dynamic, original, and beautiful. I will remember this one forever.
Posted by david brickman at 3:19 PM No comments:

Shows seen, not seen, and to be seen

Is mid-March too late to be looking back at 2018? Well, probably, but I'm going to do it anyway.

I'm plagued by the many missed opportunities of the past year, which featured a vast array of worthy, challenging, and screwed-up art exhibitions in our region, and which I wish I had been able to see more of and write more about. So here's a bit of a recap; maybe it'll make up just a little for what didn't happen quite enough here on Get Visual during 2018.

Toward the end of 2018, I caught a few really strong shows in venues that don't necessarily get a lot of publicity around here. One of those was a rare treat in the form of a large collection of paintings by Tom Nelson at the Arts Center of the Capital Region, entitled From NY to LA: Landscapes of the Hudson Valley and California Desert. Nelson, who has worked full-time as an exhibit designer at the Albany Institute of History & Art for decades, has quietly maintained a strong art practice but hardly ever shows his work. This compendium of around 60 paintings and oil sketches delighted his many fans and reminded us that he is still one of the best landscape painters anywhere.

Also in Troy, a fine exhibition of color photographs by George J Nicholson was hosted by the PhotoCenter, marking an impressive debut by a late-blooming artist making up for lost time. The 30-plus images in Taos Journey were all made in what Nicholson describes as "a seven-day reverie" in the high desert of New Mexico, in which he was inspired to abandon his original plan to shoot panoramic landscapes in favor of much more intimate images, all of them square. It worked. He will be one to watch.

I made an excursion to Saratoga Springs, where I checked out another intriguing photo project, this one by Jessica Mansmith, who received a Community Arts Grant to produce a body of work within the confines of a mysterious former military base called Norad Z-50. The resulting pictures, which were shown in the Saratoga Springs Train Station, are both haunting and colorfully lyrical.

Saratoga is also the home of Harrison Lobdell Gallery, which is co-owned and filled with paintings by Zack Lobdell, so I stopped there as well (for my first time) and took in the display of Lobdell's powerful abstract expressions, along with the super-high-tech furniture designs of his partner, Peter Harrison. It's a great space and Zack was a good host, making it well worth the visit.

You know the song about regrets, and I definitely have a few about shows I missed in 2018. Top of the list is a six-person exhibition of contemporary printmakers at Skidmore College's Schick Art Gallery entitled Pressed. We have too few opportunities to see fine etchings, lithographs, etc., by current artists and I was really sad to miss this one. Speaking of printmaking, I was also dismayed to have missed the 2018 edition of the Screen Print Biennial at Sage College's Opalka Gallery - but at least there will be another one in two years - maybe I'll be less busy then.

Another deep regret is having failed to visit a two-exhibition display of work by Rockwell Kent at The Hyde Collection in Glens Falls - one of paintings and one of prints (yet more prints!). Kent is a longtime favorite of mine, and shows like this don't come along every year. Among other great museum shows, I also wish I hadn't missed Women Artists in Paris 1850-1900 at the Clark Art Institute in Williamstown - but I hear there's a Berthe Morisot show on tour, currently at the Dallas Museum of Art, so there's always a chance to see the best artist from the Clark show there (or later this year in Paris - now, there's an idea!).

I was also sorry not to see what must have been a beautiful exhibition at Union College's Mandeville Gallery entitled Slow Grow of 18 recent paintings by Jenny Kemp, as she has been one of my favorite regional artists over the last several years. Meanwhile, at another first-rate college gallery, I missed three sculptors making a re-appearance at The College of Saint Rose to celebrate 10 years of the school's Esther Massry Gallery. And, at yet another outstanding academic venue, I managed to lose track of the UAlbany Art Museum's show entitled Younger Than Today: Photographs of Children (and sometimes their mothers) by Andy Warhol. The title alone recommended that one. Alas!


Shows to be seen

But all is not lost! There are some great shows out there that I (and you!) can still catch before they end. Here are a few examples:

Landmark at Albany International Airport Gallery through March 25. A ten-person show created in partnership with the Thomas Cole National Historic Site, this features contest-winning essays and poems along with the visual art.

Brian Cirmo: paintings at the Lake George Arts Project's Courthouse Gallery in Lake George Village through April 13. Another favorite local painter, at a favorite venue (and it's warm enough now to go up there without fear).

Hilma af Klint: Paintings for the Future at the Solomon R. Guggenheim Museum in New York City through April 23. Some critics are saying that this middle-aged Swedish woman invented abstract painting before all the famous boys, beginning in 1906 out of spiritualistic inspiration, and now rescued from obscurity to be called "beyond great" on ArtNet.com. I'm going to New York to see this unique show. Really!