Troy Night Out (February edition) and ARiThmetic at ACG

Here comes another Troy Night Out, the gallery walkabout that takes place on the last Friday of each month, and it looks like it's going to be a good one.

At the top of my radar is a new show at Clement Art Gallery, where Jon Gernon is the able curator. Titled On The Surface: Drawings, the show features eight artists, of whom several are familiar to me and several are new names. Among the familiar, there's 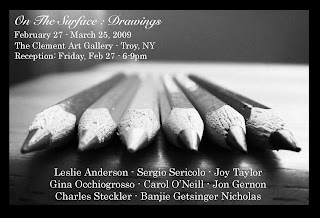 Sergio Sericolo, who won the prestigious NYFA fellowship a couple of years ago and whose work is sophisticated and complex. Charles Steckler does stage design at Union College and is a gloriously mad noodler with pen and paper. Gina Occhiogrosso's work is on the serious side, sometimes feminist, but with a light touch. Gernon himself is in the show, most likely with neo-Dutch still lifes. The others are Leslie Anderson, Joy Taylor, Carol O'Neill and Banjie Getsinger Nicholas.
Another show I won't want to miss is at Dusk Antiques, where John J. Hanson Jr. has been

putting together tastefully chosen shows for a year or two, and this time is presenting Amrose Sable Gallery director Elizabeth Dubben's paintings. The twenty-something Dubben is also the curator of this year's Photo Regional invitational, which opens next week at Sage College of Albany's Opalka Gallery, so she's getting her share of exposure. No doubt folks will want to see what the curator paints, and I am sure they won't be disappointed.
Other venues that have shows opening include Fulton Street Gallery (where possibly conflicting information leaves me uncertain what will be there, but it may be a two-person show by creative photographers Katy Wright and Gail Nadeau); and the Flavour Cafe, which is featuring a show titled Journey through the donut garden by Benj Gleeksman. This last I think is worth a try on the basis of the title alone - I know nothing about the artist or the venue - but don't say I didn't warn you if it turns out to be cheesy. Could be great - I've no idea.
Major galleries with existing shows that will also be open for the evening from 5-9 are the Arts Center of the Capital Region (see my review of Mutatis Mutandis several postings ago); the PhotoCenter, where Best of 2008 continues (and I have two pieces there); Martinez Gallery, which celebrates three outstanding Capital Region artists - Caren Canier, Willie Marlowe and Leigh Wen - who show internationally; and Terra Nova gallery, where some pretty involved fabric collages by Francelise Dawkins are on view, along with photos by Jeff Sotek.
Switching from Troy: Not to be missed is another fine show at Albany Center Gallery, which began on Feb. 17 and will have its reception on March 6 in conjunction with 1st Friday. Titled ARiThmetic, the show includes the work of four artists, William Bergman, Benigna Chilla, Maria Hall and Nat Friedman, at least one of whom is a m

athematician. There are drawings, prints, and sculptures in the exhibition, and they deal with complex mathematical processes while, to a non-mathematician, they appear to be wonderfully elegant and resolved works of art.
Chilla showed more than once at the gallery in the good old days of Les Urbach, and this big helping of her new work reprises a recognizable theme from long ago: patterns generated by overlapping screens or grids. These works evoke Sol Lewitt before he added color, and they sing beautifully. Friedman is the math guy, and his prints and stone sculptures have real soul, evoked in textures and form. Hall makes geometric pieces in metal, which can be decorative but are also very bold. Bergman, he of the infernal-machines, offers new works that are far more pure (a pair are pictured above, at right), as well as one of the calculus-derived wood constructions he's known for.
Altogether the show is strong medicine, the theme of which makes you wonder just how much you're missing when you look at and enjoy art but take all the thought and research behind it for granted. Kudos to ACG Director Sarah Martinez on guiding this exhibition into existence.
Posted by david brickman at 2:51 PM