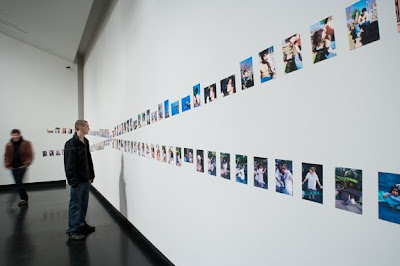 The current exhibition by German-born multimedia artist Oliver Herring at Skidmore College's Tang Teaching Museum http://tang.skidmore.edu/ is not perfect, but it is still cause for celebration.

Me Us Them is part of the ongoing Openers series that Tang curator Ian Berry created to bring artists previously unseen in the Capital Region to the attention of local audiences, and it is a great example of the wisdom of that idea. The show, which runs through June 14, is something of a retrospective by the 45-year-old, Brooklyn-based artist, and it serves as a wonderful introduction to the breadth and depth of his work.

The title of the show refers to three phases of Herring's working process that have resulted in three very different types of art. Quoting from the Tang's press release, they include "large hand-knitted sculptures made in long hours alone in his studio (representing the Me component of the show’s title); experimental videos and photographic works made with friends and acquaintances (Us), and the improvisational community performance event, Task, that Herring creates with large groups of strangers (Them)." 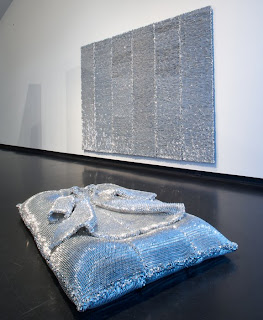 The earliest works in the show, from 1991, are the knitted sculptures (example at right), laboriously created from strips of silver or colorless Mylar. Apart from their extraordinary combination of materials and method, these pieces are impressive in scale and degree of difficulty - but their outstanding characteristic is how relentlessly obsessive they reveal the artist to be.

In viewing the rest of the show, that characteristic will be recalled again and again, and it is a key to both Herring's technical success and his poignancy.

The installation, in usual Tang fashion, makes brilliant use of the museum's large first-floor main gallery, this time by walling off a chunky wedge of space in the middle of the floor and then using all of its angles and planes to great advantage. Inside the wedge, a hodgepodge of works is arrayed in a studio-like manner, giving the viewer a space within which to join the frolic of Herring's active mind and hyperactive fingers.

Meanwhile, the wedge's front-facing wall serves to block the view from the gallery's entrance of works further inside that are not appropriate for schoolchildren to see - in this way, the many school groups that do use the Tang (it's not called the Teaching Museum for nothing) can enjoy part of the Herring exhibition without causing the kids' parents to freak out. And the back wall of the wedge provides a nice, big, white space on which to project a continuous loop of some of Herring's many videos.

Are the pieces that the wedge blocks offensive? Not if you're OK with frontal male nudity - but hey, this is America in the 21st century, so we're not all there quite yet. I'll admit, it is not an everyday experience to stand in a public space and try to act natural while examining the simulated pubic hair of a life-size and lifelike dude in three dimensions, and it did make me feel self-conscious - but I was glad to have the chance to do it anyway. Herring's two highly detailed yet quite different renditions of a friend named Wade are a tour-de-force of innovative method and sculptural integrity.

Using thousands of snapshots and a meticulously carved styrofoam form to build his portraits (there's also a clothed female in the museum's lobby area), Herring plays with light, form, texture and other elements easily associated with all photography and all sculpture, and he does it in a way that feels somehow natural despite its almost mind-boggling labor intensiveness.

Other work in the show, mostly photographic, relates to these sculptures pretty directly, but they are quite a leap from the more minimalistic and simplistic Mylar works. One series of early stop-action videos, dated 1998, makes reference to 19th-century photographer Eadweard Muybridge and other major art-historical imagery (such as Russian constructivism) while remaining fresh and witty. Too many artists these days make art historical references in such an academic and mannered way that it's tedious, but not Herring.

His other videos, too numerous to take in on one visit or to mention by name, are also fresh and witty, if a bit crudely made or obtuse. There is one related piece, though, that occupies a very large back wall of the gallery and, I think, falls seriously short of its goal.

Titled Do Two Monologues Make a Dialogue? (and pictured at the top of this post), it is a photographic snapshot installation of two crisscrossing chronological series; one is of a hot, young skater dude cavorting at home and outdoors, the other a pair of teenage Catholic schoolgirls hanging out. In the location where the two series intersect, Herring has put a shot that replaces the guy with one of the girls, forming a sort of contextual overlap like you might see in a film dissolve.

While I like the idea of the question the piece poses, and the simple approach taken to explore it, the series themselves lack any real fascination or depth. The one of the young guy has all the hallmarks of a Gus Van Sant study of Keanu Reeves (i.e., if you're not gay, forget it) and the one of the girls feels forced and superficial. Nothing is revealed about the subjects or the question the piece poses, even though many works of photographic and printed art over the decades have played far more successfully with this idea. I would have welcomed another astute or insightful approach to it, but was disappointed.

Otherwise, the show is consistently excellent, interesting, challenging and - this is important - fun. I'm sorry I can't report on the Task element, as that took place on March 22 and I couldn't go, but perhaps a reader of this blog was there and can comment on it here. No doubt it was as quirky and offbeat as one would expect from the fertile mind that Me, Us, Them explores.
Posted by david brickman at 2:21 PM

did they let you take pictures?

Martin - those installation views were provided by the Tang (on their website). I draw the line at actually taking my own pictures for the blog - too much work! db

the tang has a strictly enforced no-photo policy; i was hoping they had changed it.

No, they didn't allow pics when I was there. oh and the blue light on the bed with the jacket TOTALLY changes the visual.

Dear David,
I just came upon your article and enjoyed it very much. It's insightful and helped me understand to see my work through the eyes and thoughts of someone else. Thank you for writing it.
Oliver Herring