Francis Bacon at the Metropolitan Museum of Art 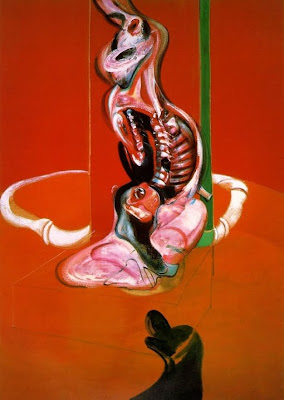 I was fortunate to catch Francis Bacon: A Centenary Retrospective on its last day at the Metropolitan Museum of Art in New York; and, though I'm sorry to be reporting on the show after it's over, the experience merits comment.

Bacon was without doubt one of the seminal artists of the 20th century. His grotesque figuration went against the Abstract Expressionism that dominated his era, but it triumphed eventually, having presaged the dominant art of the last two decades of that century.
This show made abundantly clear why Bacon matters, with room after room of major works presented decade by decade; it also featured crisp wall texts and a display of artifacts from Bacon's studio, both of which delineated a tormented life of tremendous artistic effort.
Bacon, a homosexual Englishman from a wealthy family who grew up in Ireland, boiled all of life down to three things: Birth, copulation, and death. Lacking formal training in art, he nevertheless established early in his career a highly refined individual style, and he deviated from it very little over many decades of painting. Whether presented singly or in triptychs, the bulk of his paintings as seen in this show were vertical and of the same size (1½ by 2 meters, or about 5 by 6½ feet). The example shown above is the right third of a triptych made at the height of his career, and is as good as any in representing the elements of Bacon's painted imagery.
It won't surprise you to read that a lot of people saw this exhibition on its last day, and very few of them were smiling. It is relentlessly grim stuff - and definitely not for children, though I saw some there - but it is, in its way, absolutely full of life.
I found the early years to be pretty tough going, but was rather delighted by the middle years, where Bacon fused influences of Matisse and Picasso into the best work he'd ever made - colorful, masterfully composed, complex. Even with the same horrific biomorphism that characterizes almost everything he painted, the lyrical spaces and vibrant colors of these middle paintings are unequivocally, lushly beautiful.
Was Bacon trying to use beauty to seduce the viewer into confronting brutal realities? Or was he reveling in beauty for its own sake, even as he reveled in grotesquerie and horror?
The later works retain some of that smooth prettiness but bring back the rougher, spare aspects of the earlier Bacon, possibly because his love life was making a similar reprise. He also turned to portraiture in this period, creating the one sustained deviation from the large format paintings in the form of many 12-by-14-inch pieces, some of which are also presented in triptychs.
Altogether it is quite impressive. Though I exited the gallery with some sense of relief, there was an equal sense of wonder at the stupendous body of work Bacon had produced, and the amazing career he crafted out of it.
Posted by david brickman at 2:59 PM

Am I the only philistine that doesn't like Bacon? Every one I know has raved about this show. I went and saw it too, but aside from his monumental dog paintings and a few of the screaming pope paintings, I thought that bacon was just pulling our collective leg. His greatest creation seems to have been his persona.

Arthur,
I imagine you are far from being alone in your disbelief over Bacon's success. I was confounded by his early popularity, but really thought the work got better with time. I used to think the same thing about Bob Dylan - that he was all persona - but now I find I like his music a lot. Many would also say that about Andy Warhol. Yet all three have had profound and lasting influence and, in my book, were/are sincere (even Andy in his ironic way). As for pulling our leg - isn't that what today's "great" artists (i.e. Damien Hirst et al) are all doing? Maybe Bacon was a pioneer in that!
db

I still don't like Bob Dylan. I think I was moving toward being able to get him, but then he grew that mustache and set me back an easy two decades.