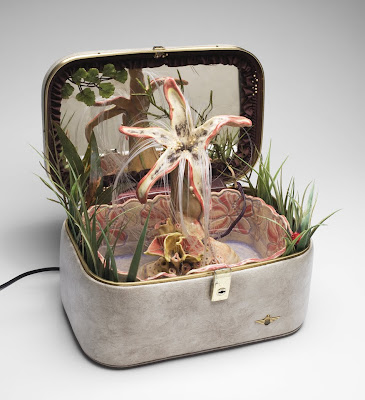 Lina Puerta's art brings up a lot of stuff. Her solo exhibition Natura at the Sage College of Albany's Opalka Gallery opened on Aug. 31, kick-starting the new academic exhibition season with well-crafted work that is provocative, disturbing, seductive, fun, and diverse.
Puerta is Colombian-American, and she is an unapologetic feminist - those two facts alone mean she is bound to be controversial. This show is not, however, an in-your-face political assault so much as it is a strongly nuanced personal body of work with political and social overtones, and those are, for the most part, reasonably subtle.
Fitting in with the niche she fills are the nontraditional mediums she employs - clay and fabric most significantly, but also artificial flowers, dirt, synthetic hair, and crocheted bits. Her imagery largely involves body parts (breasts, genitals, heads, hands, legs), augmented by elements from the natural world (pods, plants, trees, eggs, water), and it is all presented in neon-bright coloration.
Fountains are apparently an obsession for Puerta - this show features seven of them - and the room is filled with the sound of trickling water from the large one, set inside an inflatable kiddie pool, that acts as a centerpiece. The others are much smaller (mostly set within ceramic vessels held by vintage suitcases of varying sizes); they are quieter, and are easily among the more successful pieces in the show. 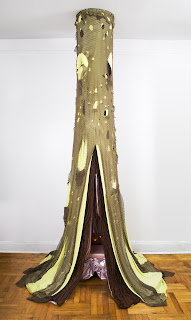 Associations with Puerta's Colombian culture are more oblique than direct here; many of the titles are in Spanish (not translated on the wall labels, but available in English, along with other details, on a stapled printout) and here and there are references to family ties (Flor de mi Abuela holds a vintage photograph) or pan-American culture (as in the installation titled Manantal de las Americas, or Spring of the Americas). Overall, though, the show presents a story both more individual and more universal than all that.
One visitor to the gallery commented to me that she thought the whole show could be analyzed from the psychological perspective, and wondered aloud whether Puerta had some sort of mental disorder, or maybe just a difficult childhood. At the very least, she said, there's a lot of therapy going on here. I'm not schooled in psychology, and I do see her point, but I've seen art far more disturbing than this by people who are not mentally ill, and, hey, who among us didn't have a difficult childhood?
Certainly, some art (maybe all of it) has a therapeutic aspect for the artist (and the audience, too), but that doesn't undermine it at all if it works as art first. While Puerta is neither the most original of artists nor the most skilled, she has a very strong personal vision that has found itself a clear avenue of expression in the mediums she employs. Most convincing is that she has been getting better and better over time - looking at the dates of the individual works on view (there are 39 altogether, dating from 2003 to 2009), I found again and again that the things I liked least were among the oldest, and the things I liked best were among the newest.
Some of those "bests" include the aforementioned suitcase fountains (one is shown at the top of this post); a rather tall fabric work titled Arbol (Tree) (shown above, right), that one sits inside of and which offers soothing comforts and psychic transportation (therapy, indeed!); and a tiny landscape on a stick (shown at the bottom of this post) that transcends its modest size to create a whole new world.
Overall I greatly enjoyed entering Puerta's personal universe of birth, sex, and death, and I ultimately found it charmingly (and a little surprisingly) hopeful. One slight problem with the show is that the gallery's spacious and bright whiteness somewhat overwhelms the work, which is mostly on a small scale - seen from across too much distance, it seems diminished. On the other hand, the work has been supremely well served by the accompanying catalog, with many excellent reproductions and useful text (but not too much of it), in both English and Spanish.
Note: Natura will be open for this week's 1st Friday festivities, but its opening reception will not be held until the following 1st Friday, on Oct. 2, from 5-9. The show runs through Oct. 23. 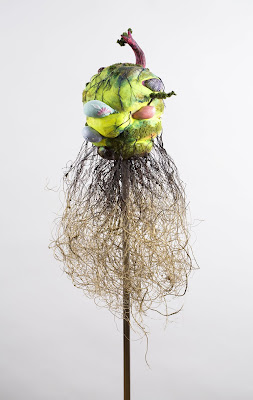 Posted by david brickman at 5:22 PM