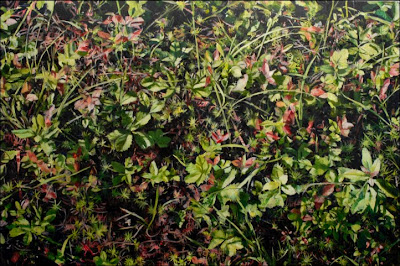 Featuring the work of Naomi Lewis and Ryan Parr, Natura is a pairing more related to a shared fascination with patterns than with the natural world, and it offers the opportunity to see larger bodies of work by two UAlbany-connected artists who have regularly appeared in larger group shows around the region, but in less depth.

Lewis, who first became known as a printmaker, received an MFA in that medium from the University at Albany in 1999 and has worked there ever since, currently as exhibition and outreach coordinator for the Art Museum; Parr got his UAlbany MFA in drawing and painting in 2005 and his work has been seen in Fence Select at the Arts Center in Troy and in the Mohawk-Hudson Regional at the Albany International Airport Gallery. 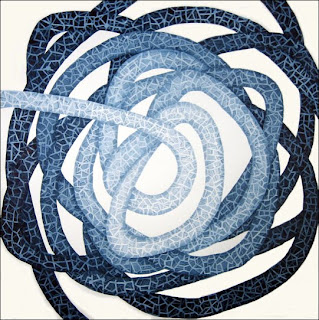 Here, apart from one digital experiment with a wallpaper idea, Lewis presents not prints, but delicate, elaborate drawings of intertwining ropy vines that have textures and shapes reminiscent of Celtic knots carved in stone. All but one of them are in shades of grey, made either with graphite or India ink (the only colored one, shown above at right, is a watercolor titled Wound Up).

Works on paper are always a tough sell, and even more so when monochromatic. But Lewis combines impeccable technique with a degree of obsession that is hard to resist, making for a mesmerizing trip around the gallery to try to suss out her coils and tangles. The pieces vary in size from less than a foot square to about 30" by 40" - they also vary in complexity, whether in the organization of the vines themselves or in their degree of ornamentation.

Among the most recent is a set of four small Tangles, each of which very succesfully combines the compression of a knot with the open space around it. Her surface treatment of these forms is almost Escher-like in its dimensionality and complexity - so we know the printmaker must be still alive and well. Overall, it's a very fine body of work. 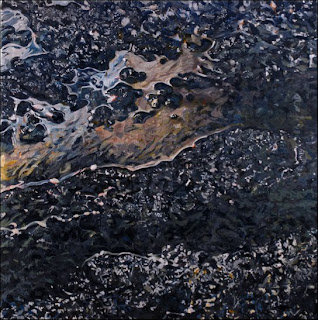 Parr's contibution to the show is somewhat less coherent, though it achieves a couple of strong passages among the nine oils on canvas included.

One of those moments occurs in the careful observations of watery surfaces in three of the paintings (the one shown above at left is titled Nothing Instead of Something). Here, Parr's highly-tuned ability to render an almost photographic image is put to good use in focusing our attention on something we likely would never notice - or even be able to see - if he didn't paint it for us.

The other fine moment comes in the form of a triptych (perhaps intended as such, perhaps not) of 4-foot-by-6-foot vertical paintings that depict incompatible subjects in a neutralizing way. Hence, he makes a green screen of trees and vines equal a maelstrom of blue jigsaw puzzle pieces equal a pink mishmash of naked male dolls. Individually, these paintings may seem somewhat senseless; together, they begin to carry something more than what they show on their surfaces.

Parr is a very able painter, but he has made some missteps, especially with a 2010 piece titled Puzzle of Pills and one from 2008 titled Soul Sold Separately (For Jeff Koons), both of which seem too intent on their broad messages to be very engaging as personal works of art.

Natura continues through May 29 - please note, the Arts Center gallery will host a discussion with the artists at 7 p.m. this Thursday, April 22.
Posted by david brickman at 3:38 PM