For more than 10 years now, the Albany International Airport Gallery has been providing complex art-viewing experiences for travelers and those who await them; the current show there, titled The Imaged Word, continues that tradition by combining the work of 11 rather diverse artists whose themes relate directly or indirectly to literature.

Far more than a show of book artists (though a few of those included do clearly fit that description), The Imaged Word explores relationships between visual art and writing from many different angles. There are pieces that are almost completely formal, such as Fawn Potash's lovingly rendered black-and-white photographs of old books (one shown below at left), and those that are almost completely conceptual, such as Barbara Todd's ethereally poetic musings on simple stones and the words of Paul Celan.

The large, rambling gallery space upstairs at the airport is well suited to such an inclusive presentation, and its many glass partitions are put to good use in placing some of the abundant text that is included. While I tend to object automatically to art exhibitions that require people to stand and do a lot of reading, in this case it is both totally appropriate and, as many of the gallery's visitors are there expressly to kill time in a valuable way, largely welcome. Still, most of the art speaks volumes with or without the supplemental intellectual rigor.

One of the exhibition's most striking works, an inventive and suggestive wooden sculpture by William Ransom, is perhaps the least directly connected to writing, though it is accompanied by a passage from a T.C. Boyle story. Made from two long, interlocked branches of a tree and their respective sections of trunk, Hold Back Hold Forth (shown at top of post) evokes folk-art traditions while transforming its materials into a sort of two-seater merry-go-round. Like Boyle's writing (which I've always loved), it has a wry sense of humor combined with a feeling of impending doom. 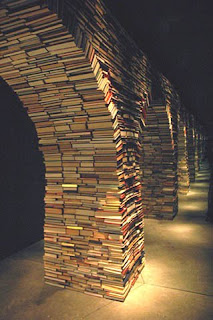 The signature piece in the show is a hall-of-mirrors trick performed by Aaron Stephan, who has built a room-sized arch of venerable volumes and then multiplied it as far as the eye can see (shown at right). His installation is tucked into a corner of the gallery where its unfinished exterior suggests construction under way. I found this design detrimental to the pristine appearance of the rest of the gallery - but perhaps a finished exterior would have provided less of a surprise in the discovery of what it conceals.

Another installation, by Paul Katz, presents an excruciatingly detailed diorama of objects and paintings, all of them covered with obsessively delineated patterns of words from William Wordsworth's epic poem The Prelude (shown at bottom of post). It is a powerful piece in scope and scale, both humbling and inspiring in its representation of artistic diligence, and I think the most emblematic of the show's core theme of the interaction and inspiration between expressive media.

Also deeply imbedded in process are three intriguing small sculptures by Amy Podmore. One was directly inspired by a certain poem a friend of hers had written; for this exhibition, that person was then asked to create new poems in response to Podmore's other two works. This back-and-forth relationship can be quite common in the daily life of dedicated artists, but it rarely gets presented to the public as such, and so is a special addition to this collection. 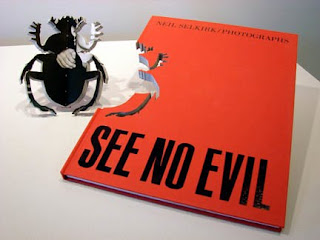 Painter Gabe Brown includes two connected bodies of work in the show. Her colorful and somewhat fantastic (but modestly sized) paintings are hung in a tight group above a vitrine full of word-stuffed sketchbooks that provide their keys. Across the room, nearly countless blank books of varying size have been filled by Brown with sinuously undulating black lines of ink - one example of the artist-book mode that the show embraces.

In two other examples, Robert The and Scott McCarney have sliced their books into new, three-dimensional forms. McCarney's Last Lines of Poetry, made from one stripped volume, hangs above the gallery's entry stairway like a chandelier. The has modified two books (one shown above at left) by precisely excising the shapes of a scorpion and a scarab beetle from their spines, coolly upending our childhood recollections of playful pop-ups.

The other artists in the show, Fern Apfel (OK, what are the odds of having both a Fawn and Fern in the same show?) and Gayle Johnson have made deftly drawn and colored portraits of beloved books - Johnson's are campy pulp covers (one shown at right), while Apfel's are anonymous groupings that are mainly about color and patina. 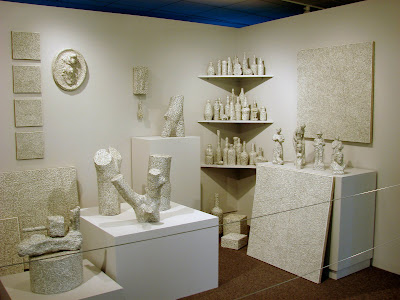