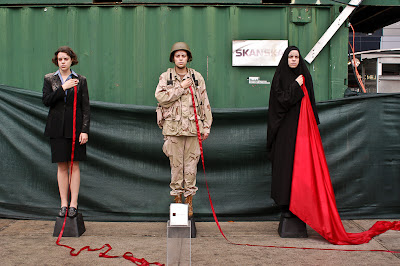 In the inevitable push-pull between form and content that lies behind all photographic imagery, the work of Marie Triller falls squarely in the middle of the argument. But it’s a pretty big middle and, as seen in the just-published collection titled Ten Years: Remembering 9/11 ($29.95, John Isaacs Books), her work covers much of that range.

Triller, who earned an MFA at SUNY New Paltz and works as a high school art teacher, has had a quiet but persistent presence on the Capital Region art scene for decades, and for much of that time she has exhibited expertly made, digitally captured color photographs that represent human culture, often from travels to distant places such as Belize, Ireland, and the American Southwest. One might argue that these pictures were clearly documentary in purpose – and that would be true – but it is equally true that they were intended as personal artistic expression. The pictures presented in Triller’s new book are no exception to this duality. 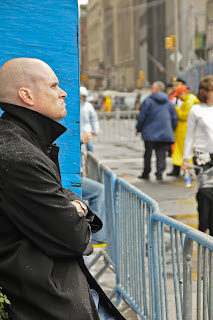 Beginning with a full-bleed cover shot of a motorcycle gas tank embellished with an exquisite painting of a New York City skyline dominated by hovering ghosts of the twin towers of the World Trade Center, the book teases the eye as much as it plucks at the heart strings. Immediately, the parameters are shown: This photographer use color, shape, composition, and point of view in ways that your everyday documentary photographers do not.

Perusing the sequences of images inside, which are organized into nine chapters of equal length, one gathers a cumulative sense of the deeper meaning behind the work. The result of 10 years’ worth of anniversary visits to the site of the WTC attacks, these 97 pictures were culled from thousands, then thoughtfully sequenced to offer Triller’s interpretation of the chapters’ themes: Memory, Security, Expression, Reflection, Community, Courage, Place, Justice, and Spirit. 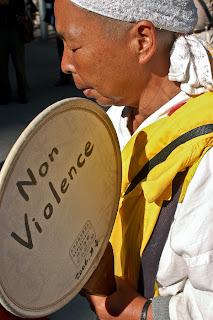 Triller explains in a short opening essay to the book that she avoided the press photographers’ territory in “the pit” at Ground Zero, choosing instead to focus on “the periphery, the crowds who gather each September 11 morning, and who tell a truer story of that bright, dark day.” I think Triller would say that, through these pictures and this book, she is attempting to share that story – their story – with the rest of us.

But a photographer – an observer – cannot set himself completely aside from the story he photographs. And, so, Triller’s book is the record of her experience of that story, filtered through her eyes and her lens. What I see when I look at these pictures is a wonderfully sensitive, open set of eyes, guided by an equally open heart, which is thrilling and impressive; I also see a highly trained and critically honed eye, which is delightful – and impressive.

Which moves me more? In this work, each depends on the other. The picture of a dark-skinned woman clutching a bouquet of multicolored roses is pure visual candy – made bitter by the knowledge that she has brought them not to celebrate a love, but to remember the loss of one. On the page opposite, low-angled sunlight hides a man’s face in shadow under a red-white-and-blue hardhat; the picture is as balanced as a still life, as the man bows his head reverently, the hat emblazoned with signatures of other surviving rescue workers.

There are American flags visible throughout this collection, hanging gigantically on buildings, stitched onto clothing, and everywhere in between. This is inevitable given the book’s source material, but it is also, perhaps, a sly nod to two seminal photography books of the past century: Walker Evans’ American Photographs and Robert Frank’s The Americans, both of which used the presence of the stars and stripes as a visual cue woven into the fabric of the books’ layout schemes.

Triller uses the same technique, placing a photo with a prominent flag at the start of the book and often beginning each section of the book with one, too. But her tale is not a patriotic or political tract – it is all about the people who come each year to remember the tragedy of 9/11 at its epicenter and who are presented here with their raw emotions on full display. Included among them are many in uniform, in family groups, in work clothes, business dress or biker attire. Many also have their own creative or political message to share, duly recorded by Triller’s camera.

The photos are presented without titles or captions – we are meant to take them in visually and draw our own conclusions about what they may mean. This is one of the book’s great strengths. It’s difficult to approach a subject so charged without succumbing to the temptation to preach, but it may be even more difficult to craft a narrative with images alone, as Triller has done very successfully here.

Text is provided in the form of a foreword by Sen. Kirsten Gillibrand, Triller’s introduction, and a thoughtful afterword by Eleanor Heartney – all are brief, leaving the pictures to do the real communicating. They do it eloquently, and beautifully. 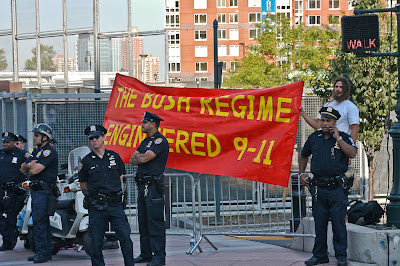 Note: There will be an exhibit of 11 of Marie Triller’s 9/11 photographs at The College of Saint Rose’s Massry Center for the Arts atrium gallery, 1002 Madison Ave., Albany. The show opens on Sunday, Oct. 16, and will run through Sunday, Dec. 11. Triller is an alumna of the college.
Posted by david brickman at 5:40 PM