Capital Region art lovers got together on two distinct occasions last weekend to celebrate past and future art spaces in Cohoes and Albany.

Friday's event in Cohoes was a studio opening for three painters and a writer who are sharing a second-floor place at 188 Remsen Street. Jon Gernon, Robert Gullie, Erik Laffer and Michael Conlin are the lucky foursome occupying the cozy space that sits above a bakery in the busiest 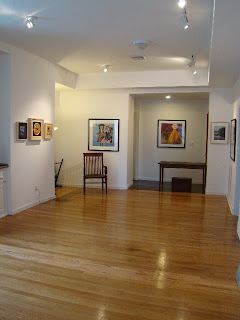 block of the commercial strip. Much of the rest of Remsen is filled with vacant or boarded-up storefronts, but there is a surge of warmth and activity in the area of The Remsen Street Studios that is breeding optimism among those who love Cohoes.

The scene at the studios that night was encouraging (very crowded - nothing like this photo, except for how nice the space looks). People were saying they hoped Cohoes would develop into another Troy, only better because it's all going to be concentrated right along Remsen. I'm sure there are folks in Troy who will be flattered, if a bit puzzled , to hear their town cited as an example to follow, but I get the point. Troy's walkability and friendliness to artists has earned it the nickname the Brooklyn of the Capital Region (from me, anyway), so it would be OK with me if Cohoes became the Troy of Albany County.

At any rate, I wish the four Musketeers the best of luck in their endeavors and offer congratulations to them on having made a promising start to a potentially scene-setting venue and workspace.

Speaking of scenes, it was quite a mob that turned out on Valentine's Day at the Woman's Club of Albany to help Cathy Frank and Ed Atkeson mark the 30th anniversary of the opening of the legendary Cathy's Waffle Store and raise awareness of (and funds for) the Club's building fund.

A delicious brunch, great coffee served by Jack Hume and helpers, and Cathy's own awesome desserts (waffles among them) were all enjoyed by proles and pundits from across the land and the ages. Performances by Ruth Pelham (who created a new singalong song for the occasion) and David Formanek (assisted by Roxanne Storms, both of the seminal Workspace Loft band Standing Offer) added spice and a touch of insanity to the proceedings.

An exhibition of art and artifacts from the heyday of Cathy's (1979 - 1984, I think) ringed the big upstairs room at the Club (a good venue for any occasion, in case anyone is looking), invoking nostalgia and many laughs. Lots of photos and video were shot at the event - see some at youTube: http://www.youtube.com/results?search_type=&search_query=Cathy%27s+Waffle+Store+30th+Anniversary&aq=f - and a promise was made to hold the party as an annual affair, which is sure to be placed high on the list of events not to be missed every year by those who came (and those who wish they had).

I remember how Cathy's was a focal point for good food and great art (or vice versa) at a time in Albany's history when not so much of that was available as now. Now, 30 years later, we have a lot more venues, a lot more restaurants and probably a lot more artists. Various galleries and spaces of all sorts have come and gone (notably Firlefanz Gallery, which occupied the same Lark Street location that the Waffle Store had been in) and a few, such as the Arts Center in Troy, have remained against pretty tough odds.

The Lark Street torch is now carried by Upstate Artists Guild, which always draws a huge crowd on 1st Fridays, and just off the block by Amrose Sable Gallery, to name two variations on the theme of scene-setting spaces. Cathy's wasn't the first, but it will always be remembered as one of the best. Nobody shares the love better than Cathy and Ed, and it will be great to look forward to sharing Valentine's Day with them every year for many to come.
Posted by david brickman at 12:36 PM

As a Cohoes resident I am happy to see the rebirth of Remsen St. While still too many empty spaces, I pick up an upbeat feeling whenever I am downtown. Friday nights are nice and Bread and Jam makes a nice getaway from the usual coffee house.

Thnaks for coming to our opening.....Robert Gullie

"the Brooklyn of the Capital Region"

I've characterized Troy as mini-Brooklyn since moving here in 1986. I remember visiting a friend in Park Slope who asked what my neighborhood was like and noting that it looked almost exactly like the block we were walking.

To me Troy has been Brooklyn of the Region in many ways (both good and bad) for some time ;-)

I guess great minds think alike!
thanks for writing
db