Spring has arrived, and the gallery scene in the mid-Hudson Valley is ready to heat up. I spent a sunny Friday afternoon in Hudson, where Warren Street is home to a dozen or so venues (down from more than 20 a couple of years ago), qualifying it as the epicenter of the valley's art market and the place to be on summer weekends.

With so many galleries, I had to pick and choose - and I apologize to those left out of this roundup, including worthy sites BCB Art, Limner Gallery, and Deborah Davis Fine Art. Those I did see ranged from the sublime to the almost awful, but above all it was a very pleasant experience - like cruising Chelsea without the stress and, particularly, without the New York attitude.
First up was the venerable Carrie Haddad Gallery http://www.carriehaddadgallery.com/, where

a show titled Then and There featured three painters of three traditions: landscape, still life and Modernist abstraction. The big front room was filled by William Sillin's natural-world views (example above), the majority of which are postcard-sized and, frankly, do not transcend the postcard concept. His larger paintings show great skill and a bit more complexity, but I found I liked best of all a trio of his oil sketches from 1990. Has he lost the freshness he displays in those earlier works?
William Bond Walker and Judith Lamb, the other two featured artists, occupy smaller spaces in the gallery's inner labyrinth. Walker's abstract work generates energy with color and composition but is inconsistent; Lamb's stylized, realistic studies of fruits, vegetables, and flowers are a bit too facile. 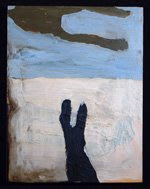 But don't despair - a real reward awaits in the gallery's large back room, where Russell DeYoung has a strong showcase exhibition of small abstract paintings (the one at right is titled Rabbit Power). DeYoung uses a limited palette to great advantage, and his odd sense of design and layering gives these must-see works both playfulness and urgency. 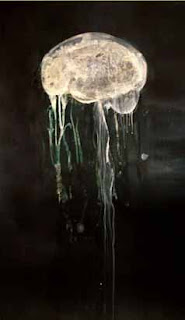 Another stalwart of the Hudson scene, John Davis Gallery http://www.johndavisgallery.com/ is hosting a solo show of paintings, drawings, and monoprints by Constance Jacobson. Elegantly hung on two floors of space, the show is titled Above the Neck and, yes, it is quite literally cerebral (the image at left is titled Cortex Medusa).
Jacobson's ability with monochromatic design is her great strength - even where color is employed, it is usually one dominant color, and most of the work stays within a grey range. The strongest works are in India ink and blue ink on paper: Tentacles and Notochord, both dated 2009, evoke nerve synapses and other mysterious, microscopic bodily functions in a crisp, float-mounted installation with other drawings. It's a fine show in a lovely gallery.
Less enthralling was a show of 12 artists pulled together at the Hudson Opera House http://www.hudsonoperahouse.org/, where the unifying factor is that each received support from the MARK professional development program of the New York Foundation for the Arts. Titled Marking Time, the show stands as an example of why curating matters: These artists do not appear to belong together, and the result of the incoherent gathering is that they all bring each other down.

The opposite effect is achieved with Other Nature at Carrie Haddad Photographs http://www.carriehaddadgallery.com/index.cfm?method=Photography.CurrentExhibit, 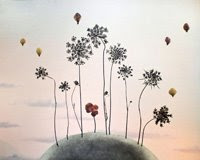 a space that opened in November under the able guidance of Haddad assistant Melissa Stafford. The four artists in Other Nature play off each other beautifully, mixing and matching a variety of digital and alternative techniques that will challenge traditional views of photography.
Lori Van Houten (her Field Notes: Seedfall 2006 is pictured at the top of this posting) offers complex layerings and textures; Jeri Eisenberg employs rice paper and encaustic to fix her soft-focus musings as free-hanging wall pieces; Portia Munson collages deftly in PhotoShop to make lush inkjet prints; and David Lebe's hand-colored photograms from 1989 (pictured above right is his Landscape #10.5) are nothing short of a revelation.
Another group photo show is hanging in another new space, this one an artists collective called gallery 345 that opened in December 2007 http://www.collective345.blogspot.com/. 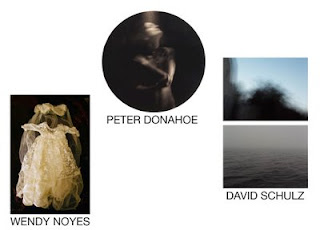 Peter Donahoe, Wendy Holmes Noyes, and David Schulz are somewhat mismatched in terms of style, but the casual nature of this small artist-run gallery allows that to work.
Donahoe shows circular portraits made with a pinhole camera (utilizing a tin can, the camera is also on display) that strongly evoke the 19th-century masterpieces of Julia Margaret Cameron; Noyes combines a range of techniques to plumb the meanings of objects and artifacts left behind by her mother; and Schulz presents a group of four diptychs that explore the potential of juxtaposition.
Finally, the highlight of the day came with a visit to the extraordinary space that now houses Nicole Fiacco Gallery http://nicolefiaccogallery.com/ (recently moved from a few blocks up the street). Fiacco's museum-quality white box contains a bizarre but wonderful installation by John Cleater, whose first foray into sculpture was aided by a residency at the John Michael Kohler Art Center (that's the plumbing-fixture Kohler).
Appendages consists of a fanciful group of highly polished, wall-hung objects in metallic or enameled finishes (one is pictured below) that are clearly drawn from the anatomy of sinks and basins, but look more like underwater creatures. Most feature standard drains; a number are shaped just like a giant toilet handle; and one incorporates a tiny video display of the artist's eye blinking in Morse code.
It's the kind of work that makes you stop and marvel at the creative process. Rarely do I find myself asking the age-old question "Where the heck do they get their ideas?" - but this was one of those times. Kudos to experimental architect Cleater on his first show at Fiacco. 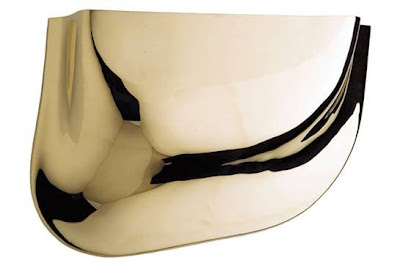 Be aware that most of Hudson's galleries are open from about 10 to 6 during extended weekends - Thursday through Monday - but their hours vary. Most of the shows mentioned here continue through the end of March; Other Nature will hang through April 19.
Posted by david brickman at 11:09 AM

Great blog, and a real service to the community. There is so much art out there and it's impossible for one person to see it all. Reading your review makes me want to visit the Harry Wilks exhibit. Best,
-Meisha