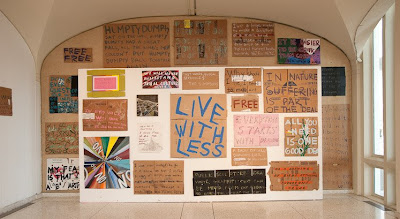 -Pete Seeger lyric from The Ballad of Mount Trashmore

A little more than 20 years ago, a friend of mine named Tom, who had recently graduated from the University at Albany with ambition to become a filmmaker, got a job with a state legislator's office. His task: To help produce a film about the notorious Mount Trashmore, a landfill so big it had become the highest point on the Eastern seaboard. Tom and the rest of the crew made a pretty good movie about the garbage problem, and it helped get the landfill closed and turned into a park. It also featured a catchy theme song by the great Pete Seeger, and turned Tom's career around - he never made another movie, instead becoming an important professional recycler.

Jason Middlebrook, whose Live With Less exhibition is currently at the University Art Museum in Albany http://www.albany.edu/museum/home.html, is equally immersed in garbage and obsessed with issues of recycling. He is also a very talented artist with a range of skills and styles that threaten to splinter apart. The show includes cast sculptures, a mobile, painted wooden constructions, painted cardboard constructions, framed works on paper, paintings on cardboard, and text pieces on cardboard. Amazingly, it does hold together.

The UAlbany exhibition space is notoriously cavernous and, therefore, difficult for most artists to fill effectively, yet Middlebrook nearly overfills it, an appropriate expression of his main point: that we have too much darn stuff. Still, there is plenty of open space in the exhibit that gets put to good use.
For example, a vast wall upstairs is occupied 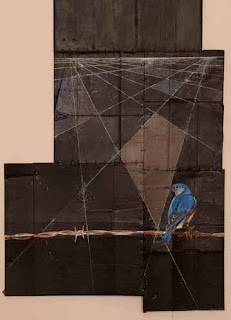 by a four-part painting on cardboard titled Stacked Night Sky 1, 2, 3, 4, which taken as a whole can appear to be a fragmented but singular image of colossal proportions representing a view from on high of a vast city at night, stars glittering overhead in a deep black sky (detail at right). Middlebrook uses an illustrative style, which creates a nice tension in conjunction with the inglorious materials he favors, including the black cable ties that join together the many flattened boxes that make up Stacked Night Sky.
That combination of particularity and carelessness is most evident in the many text-based paintings that crowd the museum's entryway (detail at top of this posting), in which Middlebrook has applied many color combinations and hand-drawn fonts to an apparently endless series of quotes, aphorisms, clichés and sincere wishes with which he papers the walls. Entertaining and colorful, the word pieces fall a bit short in my estimation, not just because they occasionally contain annoying misspellings and other errors that do not appear intentional but also because they are not particularly original or innovative. In one, Middlebrook writes MY FEAR IS THAT I AM A "B" ARTIST; my fear for him is that the piece could prove he is.
The point is that it is much more valuable to BE the artist than it is to worry about it; fortunately, Middlebrook doesn't collapse in the execution, whether with his very charming and ably-made works on paper (though the few older ones included in the show demonstrate how much better he is now than he was seven or eight years ago) or with his very strong series of painted wooden planks presented in a standing row across a balcony-like space upstairs.
Also upstairs, in the alcove formerly known as the West Gallery and now named for the museum's late former director Nancy Hyatt Liddle, is a fun 2009 installation called Pile of Buildings that again transforms salvaged boxes, this time into an LED-lit child's idea of a vast play city.
Other large installations complete the show, which is dominated

by one of them, Cardboard Stack, a thirty-five-foot tower in the center of the museum (shown at left). Made from several tons of cardboard collected on campus for recycling over a two-month period, it is less impressive as a sculpture than as an idea, but I like it in the context of a university, where no doubt some students will be moved to think about consumption in ways they may not have before.
Middlebrook's ideas may not be particularly innovative, but his energy, skill and color sense get them across in a fresh way.
Though the show is scheduled to end on April 5, it will remain one more day for a panel discussion in the gallery that will feature Middlebrook, curator and environmentalist Amy Lipton, and art journalist Frances Richard at 7 p.m. on Monday, April 6. The public is invited to attend free of charge.
Posted by david brickman at 4:59 PM