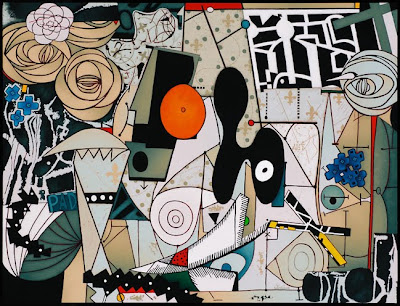 D. Jack Solomon Call On Me acrylic on canvas 2008
When my friend the painter D. Jack Solomon commissioned me to write the text for a catalog to accompany his solo exhibition at the Hudson Opera House this fall, he pretty much guaranteed that I wouldn't be reviewing the show here on Get Visual due to a conflict of interest. As it was, I didn't even get to see the show until its last week or so in early December - but let me tell you without equivocation, it was brilliant.
The catalog, beautifully designed by Gary Bielski, carries a short essay by the New York curator and critic Dominique Nahas, a conversation between me and Jack, and the following essay that I wrote about Jack's work. I present it here in the original form, with related images, so you can get to know this very important regional artist better. Follow this link to see more images and information on D. Jack Solomon; once there, you can also order a copy of the catalog directly from him.

Master Jack
Has there ever been a stranger or more challenging time to be an artist? Boom or bust, the outstanding characteristic of postmodernism has come to be called pluralism, which marks not a presence but the absence of a dominant mode of thinking. A wide-open, economically capricious art world allows for many things to happen, but it offers no coherency, no valid hierarchy, and potentially no meaning in the larger cultural sense. It is like a church without a doctrine.
In a society where people expect to change jobs every three years, for someone to make the commitment to a lifetime of mastering and practicing a craft is to be decidedly off the grid of mainstream thinking. But that’s where many artists find themselves – outside the cultural mainstream, outside the increasingly popularized and polarized artistic mainstream, working steadily and sweetly in a world nearly of their own making, where but a few signposts guide them and just a few like-minded friends join them.
The world of D. Jack Solomon is such a place. Drawing upon the reserves of a philosophically focused education, shored up by decades of teaching from that core, and driven forward by impeccably applied technique, he has built an enviable body of work that, despite its many clear influences, is as potently original as any painter’s today – indeed, it is instantly recognizable at 100 paces.
The master is both of his time and outside his time – he must speak to us in a language we understand, but he must also show us new things we otherwise would never see without his guidance. Solomon is exactly that. He has adopted tropes and tricks from sources as diverse as abstract expressionism, early modernism, ’60s pop, even the current fascination with cartoon imagery, and melded them into a gloriously complex yet unified whole. From this unique style we can derive entertainment, awe, perhaps enlightenment – and always visual excitement.
One can try to analyze Solomon’s work from various perspectives: Compositionally, for example, or in terms of color. His symbolism is extremely rich – yet he claims not to really mean anything by it. His clever borrowing and blending of bits and pieces of Fernand Léger, Stuart Davis, Pablo Picasso, and Rudolph Dirks (who drew The Katzenjammer Kids) has resulted in a cacophonous style that would blow apart if it weren’t so firmly anchored to the canvas by Solomon’s rigorous structure. 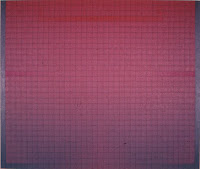 Structure: That’s the key to this work. All the diverse aspects of these gorgeous, goofy, grand paintings are ensnared in a network of dark and light elements that is as innate to pure abstraction as it is to a Sunday comic strip. So, we need to pay attention to the structure. And a key to understanding Solomon’s structure is modulation, whereby individual colors are made to vary in tone and intensity, moving forward and back in the picture plane and interweaving with each other to activate that surface. 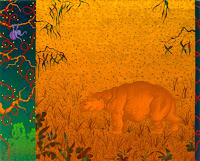 Some of Solomon’s earlier work, such as 1972’s Oakland #2 (shown above at left), was pure modulation, expressed in grids that appear illuminated from within. Other examples, such as 1984’s Ah, Lucia (shown at right), betray a distinctly Oriental influence that softens the intensity of the cartoonish colors. But even before those there were works, like Harlow of 1966 (shown below at left), that displayed a graphism and a use of popular iconography that ties in directly with the latest of Solomon’s paintings. In effect, aside from mining much of the significant art and imagery of the 20th century, Solomon has been able to mine himself to arrive at the mature style that marks his work of the last 25 years. 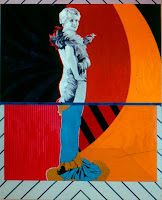 Looking at these paintings is pure pleasure. There is delight both in recognizing elements and in just getting lost in the sweep of color and composition. Aside from the power of Solomon’s sheer ability to paint, an exhilarating overabundance of ideas flows from every canvas. Some are not much bigger than a postcard, yet they pack in calligraphic elegance, geometric acrobatics, compelling encounters, numerological mysteries, and just plain silly fun.
The most recent of these works, almost unbelievably, strike me again and again as the best of all. They exude music, sex, tragic history, and sheer naturalistic beauty. Solomon’s dedication, his persistence, and his wisdom shine through these works with a consistency that can only come from a lifetime of honing skill and staying true to a vision. Spend time with these paintings and I’m sure you will agree. Though, like all masters, he somehow makes it look easy, his accomplishment is major. 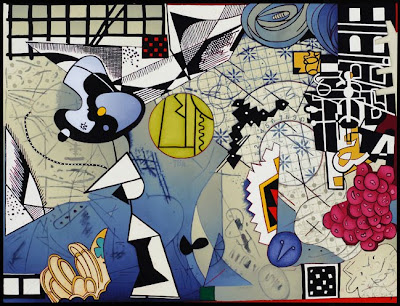 D. Jack Solomon Work It Out acrylic on canvas 2008
Posted by david brickman at 1:06 PM